The Kuwaiti Elections: Tribal and Bitter 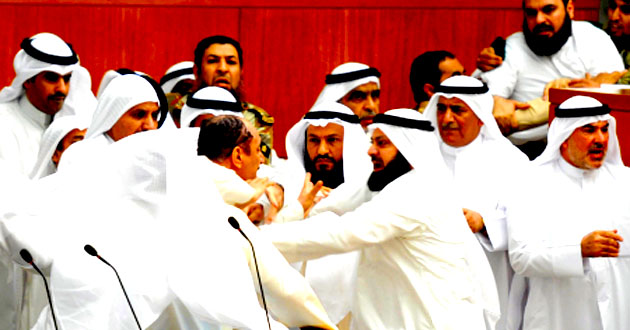 Just another day in Kuwait's Parliament. This 'discussion' ignited in a debate over Kuwaiti detainees at the U.S. prison camp in Guantanamo Bay in May 2011.

For the fourth time in six years, on 2 February Kuwaitis went to the polls to vote in Parliamentary elections. Amid a carnival atmosphere, widespread social mobilisation, and a country abuzz with political discussion, Kuwait’s four female MPs who gained their seats in the previous election were summarily dumped out of office and a loose consortium of what may be termed tribal Islamists resoundingly returned to power to share office with a smattering of Shia, Liberal and elite-supporting politicians.

Overall, this opposition has now technically amassed enough MPs to potentially vote decisively on votes of confidence in Parliament; a sobering and likely sigh-inducing sight for the Emir. The emboldened tribal Islamists are sure to attack and press the Government with fervour when the Emir appoints his new Prime Minister who will in turn appoint the majority of the Cabinet in the coming days. This new block, if they can remain mostly united will present the Government with stiff opposition in their desire for reform of the system and for greater financial rewards for their electoral clientele. The political paralysis and consequent economic blockages that have largely gripped Kuwait since liberation from Iraq in 1991 seem likely to continue.

In Kuwait as in much of the Gulf, domestically there is something of a two tier society. Those ‘Hadar’ that settled first typically by the shore became the merchant class and evolved in separation, both literal and figurative, from those that traditionally roamed around: the Bedouin. This latter group began to settle in ever greater numbers as the 19th and 20th centuries progressed. Each traditionally viewed the other with suspicion and crude, culturally-specific stereotypes: the Hadar view the Bedouin as rough and uncivilised, having suffered from many a marauding attack over the years, while the Bedouin resent the subsequent wealth of the supercilious Hadar and their control of the political and economic environments.

The Hadar in Kuwait, as personified in the Al Sabah ruling family, used the tribes of the Bedouin over the years when they needed to shore up support against other factions. In return for gradual political emancipation and greater economic benefits, tribes were initially content to ally themselves to the Al Sabah, grateful for their inclusion. Today the Kuwaiti government is reaping the consequences of these decisions.

In the early days, tribal families made up only around one in five Kuwaitis, while today those typically described as tribal voters comprise more than one in two. The 2012 election saw 20 seats of the 50-seat national assembly go to tribal-affiliated candidates, including the largest ever vote tally for any candidate; 30,000 votes for tribal candidate Mussallam Al Barrack.

In conjunction with MPs who campaign on an Islamist agenda, who obtained 14 seats, these two conservatively minded groups now possess one seat more than an absolute majority (taking into account the Emiri/Prime Minister appointed cabined members with voting rights) meaning that they can, if they were to vote together – which is by no means certain – hold up laws and act to push through a vote of no confidence in a minister.

A profound lack of unity

Political parties are not allowed in Kuwait hence some explanation for why tribes can be so successful. They often hold pre-election primaries, which are illegal, to pre-select the candidate with the best chance of winning in the real election.

The lack of parties also means that there is a profound lack of responsibility. While people are aware of these supra-individual groupings, people are nevertheless voting for a single person. This has two primary effects.

Firstly, this means that individual MPs can more easily escape censure as and when things go wrong. If the economy stagnates badly under, say, the Conservative Party, then, typically, a range of Conservative MPs would bear the brunt of the public’s displeasure at the next available opportunity. While there is some ‘macro’ responsibility in Kuwait, it just does not translate to the same degree; an MP may be as intransigent as he wishes, causing blockages and holding up bills, and still have a strong belief that he will not face the consequences of his actions. Instead, it is the Government as an easily recognisable grouping that typically is blamed. This is not to say that it does not deserve censure or make it worse by appointing most of the Cabinet unilaterally, but that there is a dearth of responsibility on the average MP.

Secondly, in lieu of a widely understood background on which to draw votes (e.g. without the ability to say ‘vote for me; the Conservative candidate’) each individual candidate must differentiate him or herself to attract votes. This can mean that prospective MPs campaign on fringe issues or this leads to candidates hawking themselves as ‘service MPs’ whereby their sole goal in Parliament will be to, for example, push for as much debt relief as possible.

Such a tactic is particularly present in the tribal MPs. Not only was this how they came into politics in the first place (above), but feeding from long-held social and economic jealousy versus the Hadar, many feel a duty to take as much money from the Hadar Al Sabah as possible while they can. Adding into this in recent years has been a raft of corruption scandals that fed the notion of the Hadar, or at least ‘someone else’, taking far more than their fare share and a commensurate impulse to seize what one can when one can, lest it all be corrupted away.

It is as if some of the key segments in Kuwaiti society are pulling in vastly different directions. The traditional elite, Hadar in origins; the traders and the political operatives, feel that they are being attacked on several sides. They feel that their previous monopolies on politics, power and economics are being critically challenged – which they are – and they are seeking to do all they can to prevent any further losses of power.

The traditional Bedouins in the shape of the tribal candidates, now at least on parity in terms of numbers, feel that their time is approaching; the years of economic disenfranchisement are waning and it is time to press their advantage for their benefit.

There are other relatively widespread movements: the Liberals who chafe as Islamists seek to extend their control over society; the Shia who seek to protect their large minority’s rights in Kuwait; the youth who have been swelled by the succour of the Arab Spring and demand a change to the corrupt politics-as-usual attitude and the bickering that has stagnated their country.

Until these disparate groups can begin to come together and to work together for something approaching a united cause, bitter arguments, recriminations and a frozen politico-economic sector will once again typify Kuwait. Such a mature resolution is needed as Kuwait will not have the ready-cash swilling around as it currently does to inefficiently buy-off sectors of disquiet. When Kuwait’s rentier bargain starts faltering and when the sedative of distributing easy money wares off, if these cleavages are not settled, the battles for whatever is left will become all the more acrimonious and destructive.

One Response to The Kuwaiti Elections: Tribal and Bitter