The Day the Death Knell Rang for Syria’s Regime? 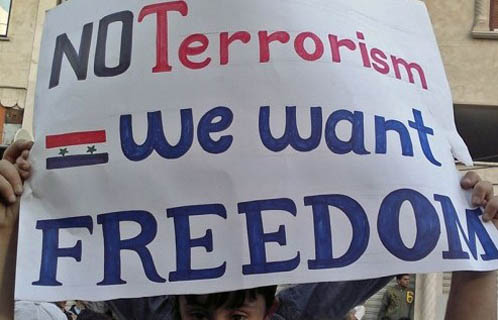 The murderous response of Syria’s security services on Friday to the protests engulfing the country has struck the death knell for the regime in Damascus.

This short-sighted decision to crush the civilian protests will come to be viewed as a momentous day in the history of the modern Middle East.  Syria is now headed on a cataclysmic path that threatens the very fabric of the country and may very well bring into play the dangerous forces of an ethnic and sectarian conflict.  That the country did not even exist a century ago is a portent for how the situation might unravel in the medium- to long-term run of history if wise minds do not take hold, quickly, of the situation.

By making the decision to offer concessions President Bashar al-Assad accelerated the inevitable demise of a regime that was founded on the principle of being immovable in the face of popular dissent.  The horrific number of civilian deaths on Friday has set the President on a blood-stained path and stripped him of much of whatever public goodwill he had remaining.  His actions have vindicated his critics.  I have always tried to give him the benefit of the doubt, genuinely hoping he could herald something truly positive for Syria.  But the more I think about him, and the more that I recall his speeches, the more convinced I become that his performances were just that. And not very good ones. His lecturing on issues of patriotism, resistance and defiance always rang hollow to me.  Which brings to mind his calling other Arab leaders in 2006 little men, “half men” for their criticism of Hizbullah’s instigation of the disastrous war with Israel that year.  This coming from the leader of a regime that Israel, his declared foe and enemy, deems a guarantor of stability in the region.

It would be a terrible miscalculation to presume that the Assad regime will ultimately prevail, no matter how violent the tools of repression it yields and unleashes.   A Syrian expat today said Bashar al-Assad is paying the price of his alliance with Iran.  But the price Assad is really paying is that of marginalizing and ignoring his own country’s and citizens’ dire needs and overwhelming desires for a dignified existence and bright future.  It is an insult to the hundreds of Syrians killed, wounded, tortured and humiliated by Bashar al-Assad’s thugs over the past month to put this in the context of a regional vendetta.  His so-called economic reforms and openness have benefited those closest to him, not ordinary Syrians.  He has fostered a culture of corruption that exceeds anything in existence during the long-reign of his father.

The calculation in several world capitals is that the fall of the regime will bring into play forces of extremism and sectarianism, and therefore it is more judicious to await the outcome of the transition currently in process, and hope Assad survives, than to get involved.  The idea is that he may pull off another Hama.  But while Hama in 1982 was isolated and butchered, this is an altogether different situation in 2011.  The traditional, hypocritical chant of the masses, birrooh, biddam, nafdeeka ya ____, we sacrfice our souls and blood for you ____ (fill in the blank with name of your favorite autocrat), this time the call was birrooh, biddam, nafdeeki ya Deraa.  People across Syria rallied to the aid of Deraa.  That is the turning point that no one has latched onto.

Unfortunately it is the Assad clan itself that has already unleashed the specter of sectarianism.  By scaremongering and playing that card and pitting the Alawi-led security forces against a mostly Sunni popular opposition the regime has pointed the gun towards its own head.  The nervous finger on the trigger is set to tremble even more as the earth quakes underneath its wobbly legs.

This is a regime that for decades has inflicted much cruelty and death on its people: “Former prisoners, detainees, and reputable local human rights groups reported that methods of torture and abuse included electrical shocks; pulling out fingernails; burning genitalia; forcing objects into the rectum; beatings while the victim is suspended from the ceiling and on the soles of the feet; alternately dousing victims with freezing water and beating them in extremely cold rooms; hyperextending the spine; bending the body into the frame of a wheel and whipping exposed body parts; using a backward-bending chair to asphyxiate the victim or fracture the spine; and stripping prisoners naked for public view. “  On this particular issue the Arab League needs to backtrack and quickly rescind its decision to support Syria’s shameless bid for a seat on the UN Human Rights Council.

It is hardly surprising then that the regime’s statement of intent is clear: we will not go down without a fight.  Unhappily, this is going to be a very bloody but one-sided fight, both ways.   The regime has all the weapons but the people have all the might.  Make no mistake, sickening scenes like the child’s skull split apart, the stare of the eyes forced wide open in the horrible shock of death, the bits of shattered brain blown out of the little head are too terrible for me to provide a link to.  But it is that unforgettable stare which now locks onto the pinnacle of the Assad clan’s throne.

Notwithstanding Turkey’s alarmed silence, Iran’s muted rage, Israel’s nervous worry, Saudi Arabia’s classic reluctance to acknowledge change and Barrack Obama’s long-overdue condemnation, uttered because it was unreasonable to have no comment, and the Arab League’s rediscovering the blessing of its deaf and mute attitude, the wheels are turning, the people are agitating and they will no longer be silenced.  The evil shadow of extremism will only take hold of the new Middle East if forces conspire to thwart the people.  The Islamic face of terror witnessed by the world over the past 2 decades is not the face of Islam; it is the by-product of repressive regimes and international, read Western, tolerance, and even aiding and abetting, of them.  More of the same will produce more of the same.   And what of the flames that the rulers in Damascus may try to start in the neighborhood as the regime begins to topple?

By turning the pall bearers and mourners of Friday’s victims into victims themselves the regime in Damascus is wagering on all-out repression to save it from itself.   It is taking the world’s silence and reading the various analyses which proclaim that the fall of the regime is not in the interest of a perceived regional status quo as a green light to reimpose state authority.  By acting in that manner it has publicly declared its political bankruptcy, denuded itself of nationalistic legitimacy and exposed itself as a regime that has for decades put the narrow interests of a ruling clique ahead of building a united, prosperous state.

The Deraa child’s death-stare from his shattered skull bores into the hollow colossus of the hereditary dictatorship in Damascus.  There is no longer a way out.  It is now just a question of time.