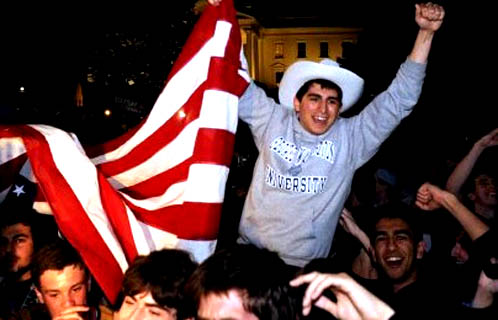 Make no mistake: the assassination of Osama Bin Laden will be used to continue and potentially escalate the so-called “Global War on Terror.” Already I hear the media drum beat growing that “the war must go on” and “we must fight against those that would retaliate.”

Each time you feed the Global War on Terror, a by definition never-ending war, it simply grows and grows. Right now this growth is being cultivated through the calls we’re hearing to be “steadfast” in the face of the “retaliations” that are “sure to come.” (Which begs the question: why did we even assassinate Osama, who by many accounts was now just a figure head and had no operational power, if we knew it would result in retaliations against even more innocent lives?)

However, there is one impending and already manifesting danger even greater than the retaliations from Osama-allies that our politicians and media outlets are fomenting fear over: the immediate explosion of nationalistic fever and bloodlust that swept across the nation directly following the announcement of bin Laden’s assassination. I direct your attention to the short clip above of students celebrating on the University of Massachusetts, Amherst campus – which is fairly representative of the simultaneous celebrations engulfing the nation well into the early morning of May 2nd.

Images like these swept over the country, with young people in the streets and even in front of the White House cheering “we won! USA! USA!” and “it’s over! It’s finally over!”, on repeat throughout the night. I had to ask myself while watching these events: they really have no idea, do they?

If by “we won” and “it’s finally over,” these jubilant celebrators meant that our “win” was killing the ultimate terrorist boogeyman – than, yes, I suppose the specter of bin Laden has been defeated. Yet, the Ghost of Osama will keep the eternal “Global War on Terror” (GWOT) and the mass killings (perpetuated primarily by the United States) going and going. The GWOT is by definition an un-winable, never-ending war. It is a “fight” against a vaguely defined concept, meant to keep us on our toes anytime we determine there is a new boogeyman that must be defeated. And the great thing is that it’s global! We’ve got the whole world to scour over for terrorists! We’ll never have a shortage.

What’s important here, however, is that Osama’s assassination is being used consciously and subconsciously to justify and forget about all of the Afghanis and Pakistanis who have died. And, most likely, even the dead Iraqis as well. Don’t forget, we invaded (and continue to occupy) Iraq on the lie that Osama and Saddam were collaborating to kill Americans. (I’m serious: be watchful for the first time you hear “we killed Osama!” as retroactive nonsensical justification for the war in Iraq. I have already heard it mentioned once.). I repeat – the basis for our invasion of Iraq was a lie, and hundreds of thousands have died in Iraq as a result of it. That’s 9/11 over, and over, and over, and over, and over, and over, and over again. (And it’s still going on).

The problem is that American patriotism is so blinding that many Americans can’t even perceive how the death of this one person doesn’t justify the death of 14,000-34,000 Afghanis, thousands of Pakistanis, hundreds of people in Yemen, hundreds of thousands in Iraq, and thousands of more Americans. Not to mention the destruction these wars have brought to our environment, nor the financial and social cost we have burdened at home for them. (And by “we” I mean mostly the poor, women, and other historically marginalized communities. Those weapons and oil corporations seem to be doing pretty well for themselves.) So to all those Americans screaming “mission accomplished!” at the top of your lungs: I don’t really understand. What was the mission? To kill Osama? Tell that to the hundreds of thousands (if not millions) of innocent people that died before him in that effort, as well as to those that are still yet to perish in the wake of the “great” and “mighty” USA.

This nationalistic fever, however, has another symptom. And that is the misunderstanding of the term “justice.” There is justice and there is vengeance. These are two very different terms which should not be confused. What is being celebrated is not justice, it is vengeance. The justifications for our wars spanning across the Middle East and North Africa are based on vengeance, with those who had nothing to do with September 11th paying the vast majority of the price.

When Obama stood before the nation on his podium and proudly declared “justice” had been served, I asked myself: and where is the justice for the innocent Pakistanis, Iraqis, Afghanis, the Yemenis; the countless others that we will never know are dead; those who are innocent that are locked up in Guantanamo; and the whistle blowers like Bradley Manning? In fact, while reminding us of the suffering of those who lost loved ones on 9/11 and of those families that have “paid the ultimate sacrifice” during the War on Terror, not ONCE did Obama mention the thousands upon thousands upon thousands of those that have died from American bombs, bullets, and drones. Not once did Obama speak a word about the entire villages in Afghanistan that have been wiped off the map, nor did he say a peep about those who are suffering from cancer epidemics in Iraq as a result of our depleted uranium tipped bombs, and nor did he recall the wedding in Pakistan that we massacred. When will these people get their long awaited “justice?” The answer, is sadly, never. Because they are expendable fodder in the eyes of American nationalism and through its confusion over the meanings of justice and vengeance. Finally, when Obama was recalling the action to take down Osama (as if he were reading the nation a Tom Clancy novel), and he dared to mutter the words “[t]hey took care to avoid civilian casualties,” I could only think that there was a first time for everything. Too bad this first time had to come 10 years and at least four countries too late.

Someday I wish to see cheering crowds across the United States when Bush, Obama, et al face trial for starting and maintaining illegal wars and military campaigns that’ve killed hundreds of thousands (again, if not millions), wreaked utter havoc on our planet, and gutted our national infrastructure as well as social programs. Sadly, I know that day will never come. The celebrations directly following Osama’s assassination re-awoke the blind nationalism, bloodlust, and calls for eternal warfare that were finally starting to fade. I hope they soon begin to subside once more and finally crumble.

I have one final question. If we (rightly) proclaim that Osama is a “monster” for planning the killing of roughly 3,000 innocent lives on September 11th, then how do we have the gall to call this nation anything different when our wars have killed that number many, many times over in Afghanistan, Iraq, Pakistan, Yemen, and god-knows where else for nearly a decade? While the United States helped create and then finally took down Osama bin Laden, the most pressing monster we’ve created to date is this Global War on Terror. It must be stopped.

One Response to Dangerous Bloodlust Bin Laden Has Unleashed