The, ah, ‘Peace Process’ Is On A Road To Nowhere 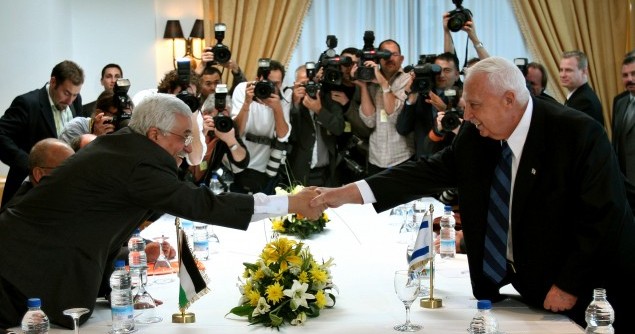 Despite much saber-rattling by Israel and the US administration and hyped-up expectations by the Palestinian leadership, the recognition of Palestine as a non-member observer state last November is fast becoming yet another footnote in the protracted conflict.

Only hours after the announcement of Palestinian’s “state” status, Israel had its own to make: the building of a new illegal settlement on Palestinian land (according to international law, all of Israeli settlements in the occupied territories are illegal).

The area is called the E-1 zone by Israel. A couple of European countries responded with greater exasperation than usual, but soon moved on to other seemingly more pressing issues. The US called Israel’s move “counterproductive”, but soon neglected the matter. Palestinian activists who tried to counter Israel’s illegal activities by pitching tents in areas marked by Israel for construction were violently removed.

Mahmoud Abbas’ Palestinian Authority (PA) is at a standstill in the same pitiful possession. It continues to serve as a buffer between occupied, ethnically cleansed and rightfully angry Palestinians. Its existence would not have been possible without Israel’s consent.

Fiery speeches, press releases and conferences aside, the PA has effectively sub-contracted part of the Israeli occupation – as in maintaining Israel’s security for example – in exchange for perks for those affiliated with the PA.

Examples of these privileges include easier access to business contracts or jobs. It is this symbiosis that constantly averts any serious confrontation between Israel and the PA. Both parties would lose if the status quo were seriously hampered.

For Israel to reclaim its responsibilities as an occupying power under international law would be a huge financial and political burden that could impede its settlement constructions in East Jerusalem and the West Bank. In fact, Israel is able to maintain all the benefits of military occupation without much cost. For Abbas, shutting down the PA conglomerate would mean financial and political suicide for the branch of Fatah politicians affiliated with him.

Thus some clever manifestation of the “peace process” show must be found that would help both parties save face – Israel to finish its settlement plans and the PA to sustain its enterprise.

In fact, Israel’s decision on January 30 to release US$100 million of taxes and tariffs collected on behalf of the PA (which it has withheld, some say robbed to punish the PA for its UN bid) was possibly a prelude to the resumption of the same ongoing peace charade.

According to an Israeli official cited by Agence France Presse, the transfer was a “measure to ease the financial crisis faced by the Palestinians,” ironically manufactured by Israel. That gesture of “good will” is likely to be harnessed into some “confidence building measures” in hopes of resetting the entire “peace process”.

An explosion of mass rallies and protests in the West Bank – where most people have not received a full pay check for months – will neither serve Israeli nor PA interests. Scenes of desperate Palestinian men and women marching throughout the territories would be a threat to both Abbas’ already drained political apparatus and Israel’s horribly disfigured image.

But there is evidence that there is more to the plan than averting a crisis. According to a statement made by Muhammad Sbeih, secretary-general for Palestinian affairs in the Arab League, an Arab League delegation will soon to head to the US to “move forward the Middle East peace process”. “The proposal includes specific Arab ideas about Israel’s withdrawal from the occupied Palestinian territory, the establishment of a Palestinian state, “guaranteed security for both sides”.

Moreover, on February 1, the London-based Arabic newspaper al-Quds al-Arabi reported that the UK hosted a conference for Palestinian and Israeli officials to discuss ways of resuming the so-called peace process.

According to the paper, which quoted Palestinian sources, the Israeli delegation was headed by Yossi Belin – known for his role in laying the foundation for the Oslo accords. The head of the Palestinian delegation, prominent Fatah member Muhammad Ishtayya, denied that any negotiations took place. Instead, he told Ma’an the conference – held at the Wilton Park Resort in southern England – “only discussed the Middle East crisis”.

Meanwhile, attempts at wooing Hamas continue. Several Arabic newspapers, including Asharq Al-Awsat reported that the head of Hamas’ Politburo, Khaled Meshaal, had indicated in a recent meeting with King Abdullah of Jordan that Hamas is prepared to the accept the so-called “two-state solution”. Meshaal allegedly asked the Jordanian King to relay the message to US President Barack Obama. However, a Hamas statement denied the reports as baseless.

Israeli politics regarding the occupation and illegal settlement constructions are unlikely to change after its January elections. Despite media enthusiasm over the rise of Israel’s left and center, there are no indications that the new configuration is likely to sway Israel away from its war-driven policies.

However, Israel looks at political events unfolding in Washington with concern. The US administration is assembling its team for Barack Obama’s second term in office and of course, Israeli interests are high on the agenda. Two nominations in particular were of much interest to Israel, that of John Kerry, as secretary of state and Chuck Hagel as secretary of defense.

A Voice of America website commentary poised a mundane question in relations to Kerry’s new post on February 1: “Can Secretary of State John Kerry Bring Peace to Israel and the Palestinians?”

Israeli media however, is far more candid in these matters. “Is John Kerry good for Israel?” asked Yedioth Ahronot on its English website. “He may be a friend of Israel but is not considered the standard bearer for Israel at the Senate,” the Israeli paper quoted a state official as saying.

If Kerry is not good enough, one can only imagine the seething anger of neoconservatives, pro-Israeli pundits and other officials at the nomination of Hagel. Hagel’s past statements on Israel and Iran are neither those of “standard bearers for Israel” or anything that resembles a commitment of any sort.

In an all-day confirmation hearing on Capitol Hill, Republican lawmakers pounced on the former Nebraska Republican senator regarding everything he said or failed to say (or sign) over issues of vital interest to Israel. It was frankly difficult to decipher whether Senator John McCain and Senator Ted Cruz were more concerned about genuine US security issues or Israel’s “security” masquerading as vital US national interests.

Hagel is chastised for criticizing the immense power wielded by the pro-Israel lobby in Washington – as if his allegations were mere fantasies and despite the fact that the major campaign unleashed against his nomination was launched by the very forces he criticized.

Few expect a major departure from old policies once the new Washington team is fully assembled, although others underscore a slow but steady shift in US priorities in the Middle East. Even if one adheres to a more optimistic reading of the supposed “shift” underway in Washington, one cannot expect a major change to Israel’s behavior in the occupied territories.

Without a real mechanism to force an Israeli change – which must be accompanied by taming the disproportionately powerful lobby – little on the ground is likely to change.

While American politicians were busy defending their pro-Israeli credentials in Senate hearings, other hearings of great importance, yet, thus far of little consequences, were being concluded elsewhere.

An inquiry set up by the Human Rights Council last March and brazenly boycotted by Israel, had finally concluded that Israeli settlements are a violation of international law while calling on Israel to “immediately” withdraw all of its settlers from East Jerusalem and the West Bank.

The UN investigators concluded that Israel’s continued violations of the 1949 Geneva Conventions could amount to war crimes “that fall under the jurisdiction of the International Criminal Court,” Al-Jazeera reported. “Israel must … cease all settlement activities without preconditions [and] must immediately initiate a process of withdrawal of all settlers”, the report, released, January 31, read in part.

The findings by the well-respected international organization once more accentuate the real parameters of any genuine peace. Bit this kind of peace doesn’t suit Israeli, hence US interests.

Until Palestinians find an alternative to this sorry trio of Israel-US-PA peacemakers, all they can expect is more of the same – a secret conference here, another settlement there and an occasional Israeli handout, oddly enough, taken from Palestinians’ own tax money.