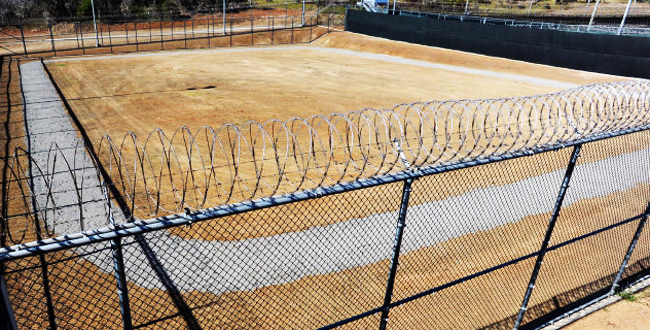 A row in the US Congress over Pentagon spending on a soccer pitch for suspected terrorists incarcerated in Guantanamo focuses attention on the importance of the beautiful game to both the militants and their counter-terrorist detractors.

The $744,000 pitch outside a $39 million penitentiary-style building known as Camp 6 at the U.S. Navy base at Guantanamo Bay, Cuba is intended to reward the most cooperative of the facility’s 120,171 inmates. It builds on US efforts to employ soccer over the past decade as evidence that it complies with the Geneva Conventions and to reduce tensions between the militants and their wardens.

The pitch, set to be inaugurated next month once contractors have installed latrines and goals, is surrounded by guard towers and surveillance cameras and accessible by a secure walkway to reduce contact and conflict between the inmates and their captors.

It is also yet another example of the US government’s use of soccer in its battle for the hearts and minds of militants and their potential supporters. If soccer was a bonding and recruitment tool for jihadists across the globe, it could well serve to reinforce rehabilitation.

That is a notion that doesn’t go down well in an election year and at a time of economic crisis with President Barak Obama’s Republican opponents in the US Congress.

“Seven hundred and fifty thousand dollars for crying out loud? Our deficit this year is $1.2 trillion and we’re spending this kind of money on terrorists?” asked Florida Republican member of the House of Representatives Gus Bilirakas in a television interview.

Dennis Ross, another Florida Republican went a step further. He introduced in Congress what he dubbed the ‘NO FIELD Act’ or None of Our Funds for the Interest, Exercise, or Leisure of Detainees Act, which would reduce the Defence Department’s 2013 budget by $750,000 – the soccer pitch’s price tag.

“Though it’s a tough choice to say who deserves more blame for such apparent waste, fraud and abuse, the genius who thought up the soccer field in the first place, or the contractor fleecing Uncle Sam for a small dirt field surrounded by a green fence, one thing is certain – this episode shows President Obama’s priorities in action,” said retired Navy Commander and former Pentagon spokesman J. D. Gordon who served as an advisor to Herman Cain’s failed 2012 Republican presidential campaign in an op-ed on Fox News.
Guantanamo commander Rear Admiral David B. Woods told McClatchy that construction costs were high because all equipment and supplies had to be imported to the 116-square-kilometer base in southeast Cuba.

“That’s probably the biggest misperception and lack of understanding of the expense of doing things down here. It’s unlike any place else in the world mainly because we don’t have the opportunity to capitalize on the local economy,” Admiral Woods said.

Over the past decade, soccer has constituted part of the United States’ soft power tools in seeking to win hearts and minds. The US administration in Iraq in the wake of the overthrow of Saddam Hussein made the construction and rehabilitation of soccer stadiums and clubs a priority in a bid to counter efforts by militants to make inroads among the country’s youth.

US military and civilian officials argued that reopening soccer stadiums and encouraging people to play free of fear or persecution would win hearts and minds among those scarred by regimes for which soccer was either the enemy or a weapon of terror.

Members of the US 87th Infantry’s 1st battalion were thrashed 9:0 a few years ago when they played the Sons of Iraq, a team made up of former insurgents, on a makeshift pitch on a dirt field in northern Iraq. As far as the Americans were concerned, their thrashing contained an important message: soccer balls can be more powerful than bombs. “You lose a game, but you win a lot of friends,” said Maj. Gen. Mark Hertling, the then commander of the 1st Armored Division and Multi-National Division North.

Before US-led coalition troops entered Baghdad in 2003, Saddam Hussein’s men went into the neighbourhoods and passed out guns and stored weapons in schools. Because it was too dangerous to drive the trailers away through the streets, American forces blew them up – and in the process, damaged schools and surrounding homes. Though the US military returned to clear away the debris, distribute soccer balls and help set up teams and leagues in tense towns like Ramadi and Sadr City, unexploded shells remain in fields and school-yards where children kick their balls.

With an estimated 42 million land mines or two landmines per person in Iraq in a nation of 24 million, US Provisional Reconstruction Teams partnered with Spirit of Soccer, a Johnstown, Pennsylvania NGO that employs soccer to educate youth about the risk of mines. Trained by Spirit of Soccer, Iraqi coaches, including women, discussed fair play, avoiding dangers from land mines and other unexploded munitions, sportsmanship, tolerance and the need for non-violent conflict resolution while dribbling and kicking penalties. Participants returned to their communities as coaches and organizers of Youth Soccer and Mine Awareness Festivals.

In Afghanistan, US-led international forces played shortly after their 2001 overthrow of the Taliban soccer against an Afghan team in Kabul’s Ghazi Stadium to highlight the change they were bringing to the war-ravaged country. The stadium had been used by the Taliban for public executions, stonings and amputations. Americans and Iranians competed in Iran in the reconstruction of soccer pitches as a way of earning brownie points.

Soccer may seem an odd foreign policy tool or military priority. But with at least half the population of Iraq and Afghanistan under the age of 18, soccer balls and shoes are as basic to mending the two countries’ social fabric as beams and girders are to mending the damaged buildings. Indeed, the future of Iraq as well as Afghanistan and US relations with both countries may well in part depend on soccer paraphernalia and US efforts to prevent political interference and sectarian strife from undermining the two nations’ soccer performance.

Clearly, it will take more than a soccer training, a soccer league and a successful national team to overcome Iraq’ and Afghanistan’s ethnic, religious and social divisions. Yet sociologists suggest that soccer can play a role in strengthening feelings of unity and national identity. Sports can also have a cathartic effect by channelling human aggression away from violence and into more healthy channels. Nelson Mandela used a racially integrated national rugby team to unite South Africa in the wake of apartheid — a story now made famous by the movie Invictus. South Africa went on to become the first African nation to successfully host the World Cup.

These are lessons that may be lost on the Republicans but they are certainly not lost on militants. The most radical militants including Al Qaeda’s Somalia affiliate as well as some
Saudi and Egyptian Salafi sheikhs denounce soccer as the infidel’s game because it was introduced by British colonialists and because of its potential to compete with Islam, particularly as a release valve in autocratic environments. Saudi Arabia recognized soccer’s competitive power during the 2010 World Cup when it, afraid that believers would forget their daily prayers during matches broadcast live on Saudi TV, rolled out mobile mosques on trucks and prayer mats in front of popular cafes where men gathered to watch the games.

More mainstream militants like the late Osama Bin Laden, Hamas leader Ismail Haniyeh and Hezbollah chief Hassan Nasrallah are fervent soccer fans who use the game as a bonding and recruitment tool. Soccer brought recruits into the fold, encouraged camaraderie and reinforced militancy among those who had already joined. The track record of soccer-players-turned suicide bombers proved their point.