Tension Between the United States and Iran Escalates: Is Conflict Now Inevitable? 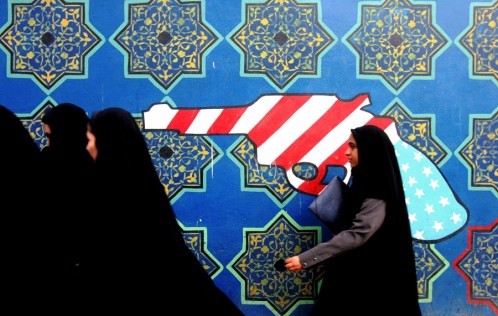 Over the Christmas and New Year holidays Iran undertook a series of naval exercises in Gulf waters, which included the test firing of a range of missiles, one of which could theoretically reach as far as Israel. While Iran’s military elite claimed that the tests were successful, given their record of exaggeration and the attempted manipulation of photos of missile launches, it is difficult to take such statements at face value.

Yet such tests are not really about tactical military preparations or the meaningful testing of a new missile. Instead they are designed to once again rattle the sabre, to remind both the Gulf states and in particular Europe and America of Iran’s military threat. In particular, these exercises and other bellicose statements in recent weeks about Iran’s ability to “close down the Strait of Hormuz” are aimed at pressuring European states not to back America’s new tough round of sanctions on Iran.
In other words, the exercises and the threats regarding the Strait of Hormuz are mostly a PR diplomatic bluff; yet this is not to say that they should be ignored.

The greater tensions in the Gulf and the more exercise that Iran feels it needs to put on, the greater the chance of a conflagration occurring by accident. Recent instances of the kidnapping of British Marines in 2007 and of Iranian Revolutionary Guard (IRGC) boats “buzzing” US warships in 2008 could easily have escalated quickly and were enormously incendiary and foolish actions by Iran.

US election season being underway may have prompted President Obama’s tougher new sanctions on Iran to shore up his “strong man” credentials and though America certainly does not want to instigate an actual confrontation with Iran in this post-Iraq era, provocative actions and miscalculations from Iran in the context of pressure from domestic, Gulf and Israeli lobbies could prove difficult to resist.

At the same time, Iran does not want a “hot war” in the Gulf either. Despite the constant inflammatory rhetoric emanating from Tehran, the elite knows full well that were a conflict to occur with US or Gulf forces in the region, even were Iran’s asymmetric forces to strike a blow or two, given the profound technological mismatch between Iran and America and its Gulf allies, overall it is not difficult to imagine Iran’s entire Navy, significant portions of its air force and any number of its petroleum installations being summarily destroyed. While this would temporarily solidify the Iranian elite’s position given the likely subsequent rallying of public support, such blows could be profoundly crippling.

While some suggest that Iran’s elite is intrinsically unstable or “irrational” and may actually seek such a conflict given that they are beholden to their religiously inspired Revolution, one only need recall that at the height of Khomeini’s rule in the 1980s, despite typically nasty rhetoric to the contrary, Khomeini engaged and traded with Israel. Iran needed spare parts for its fighters and Israel wanted oil: rhetoric is one thing; realpolitik is another.

Despite neither side wanting serious escalation, neither America nor Iran appear able to escape their cold war. Aside from a deep history of mistrust and proxy conflicts for more than three decades, today Iran feels profoundly encircled and afraid. It sees tens of US bases and tens of thousands of US troops to its north, south, east and west, not to mention US allies laden with advanced military equipment across from Iran in the Gulf.

Wholly unable to cope with such a conventional military challenge, Iran has instead engaged in augmenting its asymmetric forces both in terms of the IRGC and by supporting groups such as Hezbollah. This, in turn – in addition to persistent US claims that Iran has been involved with the supplying of, for example, IEDs in Afghanistan and Iraq to kill US forces – has entrenched US implacability to Iran.

Thus today the “Great Satan” is a mainstay of Iranian politics and Iran is a byword for perfidy in US domestic politics, making reaching any accommodation difficult. Iran’s recent overture for diplomacy is cleverly timed for Tehran knows perfectly well that the Obama Administration will find it all but impossible to engage during the election season. Therefore, when America rejects this attempt, Iran can claim that it tried the diplomatic route but was rebuffed, much as President Obama did with his initial overtures after he was elected.

There are no easy exits on the horizon from this vicious cycle. Both sides know fundamentally that they need to talk, but both are constrained by their domestic climates, where accommodation and even discussion is seen – absurdly – as weakness. So too are Gulf states constrained in their relations with significant antipathy across the region to Iran. Yet the immutable relations between Iran and the Gulf states born of their unalterable proximity is perhaps the best hope for a future accommodation. Both HH the Emir of Qatar Sheikh Hamad bin Khalifa al-Thani, HE the Prime Minister and Foreign Minister of Qatar Sheikh Hamad bin Jassim bin Jabor al-Thani, and most recently Mohamed bin Rashid al-Maktoum, the Prime Minister of the UAE, have voiced sporadically reasoned and moderate views on Iran; yet much work and time is yet needed – not to mention a partner in Iran – for such sentiments to prevail and for a new Gulf security architecture to replace the current failing framework.