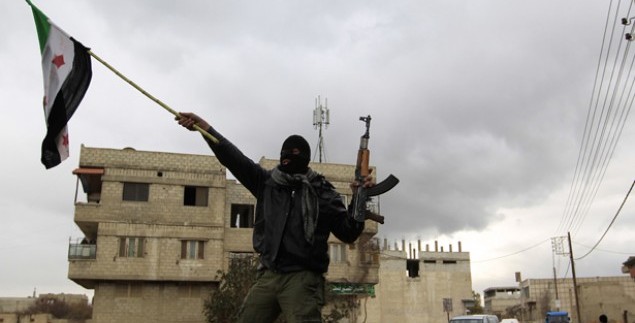 GOP presidential hopeful Willard “Mitt” Romney has called on President Barack Obama to arm the Syrian opposition, accusing the president of lacking leadership for declining to do so.

Romney can’t decide whether he is afraid of Muslims or wants to give them sophisticated weapons. He once explained that he did not want to focus on killing Bin Laden because he was just one leader, and the problem was ‘Sunni and Shia’ and ‘the Muslim Brotherhood and … Hizbullah… etc.’ In other words, Romney looks at a fifth of humankind and jumps out of his skin in fright that there might be Muslims out there.

Romney does not seem to know that the ruling Baath Party in Syria is a secular party founded by Arab Christians and supported by many Syrian Christians, Alawis (folk Shiites) and secular Sunnis. Personally, I don’t have a problem with the Syrian Muslim Brotherhood being part of the coalition that overthrows the Baath, since the al-Assad version of the party has gone fascist and verges on the genocidal. But Romney at least tried to demonize the Muslim Brotherhood as somehow part of the same phenomenon as al-Qaeda (it is not). He is, let us say, being inconsistent.

So here are some reasons Gov. Romney might consider as to why arming the Syrian rebels is a very bad idea.

1. Once a country is flooded with weapons, they don’t stay in that country. They get resold and spread around the region. Egypt has seen a spike in shootings because of the influx of Libyan guns, and the Egyptian military even intercepted a shipment of smuggled rocket-propelled grenades. The Israelis are petrified that some of the more sophisticated rocket propelled grenades that Qatar gave the Libyan rebels are making their way into Gaza and be used by Hamas against its soldiers. Arms given Syrian rebels will subsequently make their way into Lebanon, Turkey, Iraq, Jordan, the West Bank, Gaza and Egypt. Is that wise?

2. The Islamic State of Iraq, an al-Qaeda affiliate, is among those fighting the Syrian regime. So far it is a bit player in that country, but it certainly would be among the groups receiving American weapons from Romney. Since ISoI has killed a lot of US troops and keeps blowing up Baghdad (its attacks left 18 dead in Baghdad yesterday) — is that wise?

3. Armed militias are hard to demobilize. Libya still suffers from this problem outside the big urban centers. You can tell ordinary soldiers to turn in their weapons and go home. Militiamen will try to keep power, or will hold you hostage with their guns until you pay them off. A post-revolution Syria will be much more stable if it is brought to power by relatively peaceful crowds, as happened in Tunisia and Egypt, than if tribal and sectarian armed gangs come out on top.

4. Syria is geopolitically too important to flood with powerful arms. It abuts Israel, Jordan, Iraq, and Turkey. A US-supplied war that spills over onto these countries is a nightmare for US policy.

5. The conflict between the Israelis and the Palestinians has entered a new and dangerous phase, with a significant expansion of Israeli theft of land and resources from Palestinians of the West Bank. The latter had been convinced to lay down their arms and join in a ‘peace process.’ The combination of the betrayal of all the promises made to the Palestinians about giving them a state and returning to them their territory, along with easy availability of US arms from Syria, might well provoke another violent Intifida or uprising.

6. The conflict in Syria is already threatening to destabilize Lebanon. That country’s disarming of its sectarian militias in the 1990s after the Ta’if Accords was a major achievement for stability in the Eastern Mediterranean. American arms given to Syrian rebels would risk reviving armed militias in Lebanon, where some groups (the Shiite Hizbullah e.g.) favor the al-Assad regime whereas others (many Sunnis) support the Syrian opposition. There have already been clashes between Allawis and Sunnis in the northern city of Tripoli.

7. The Syrian Muslim Brotherhood sympathizes profoundly with Hamas, the Palestinian militant group based in Gaza. A Syrian MB armed to the teeth with sophisticated US weapons would be tempted to share them with its sister organization, Hamas. Is that what Romney wants?

8. Turkey is set to grow 9% this year, and is among the few bright spots in the economy of the greater Mediterranean. Arms to Syrian rebels would certainly make their way into Turkey, which faces a challenge from the PKK (Kurdish Workers Party) terrorist group, which blows things up in eastern Anatolia. Destabilizing Turkey would have negative effects on everything from European trade to that of northern Iraq.

9. Highly armed Sunni militias, having taken over Damascus, are likely to oppose the Shiite government in Baghdad that Romney’s Republican predecessor, George W. Bush, established. Another big round of violence in Iraq is highly undesirable, with destabilizing implications for US allies in the Gulf, including Bahrain, and it would likely cause the Shiite government of Iraq to move even closer to Iran.

10. If the revolution does succeed, it is desirable that the victorious groups move toward parliamentary democracy. A set of militias armed to the teeth will impede that transition, especially if some of the groups are big and well organized, as with the Muslim Brotherhood.

Romney has gone from accusing all the Muslims of working conspiratorially toward a new Caliphate to volunteering to fund Muslim fundamentalist militias in a quest to overthrow the secular Baath Party. It is a baffling set of contradictions, pointing both to his lack of a consistent policy toward the Middle East and to his being altogether unprepared to be president.

One Response to Ten Good Reasons NOT To Arm Syrian Rebels