Syria: Fear Versus Hope on a Knife Edge 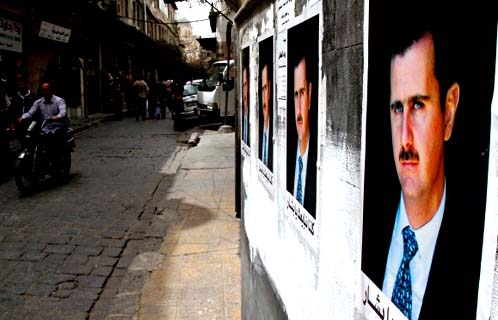 The uprising in Syria has been raging for more than two months now, and there’s no sign of progress from either side of the fence.

The protesters are standing their ground, demanding the freedom and rights they believe should prevail. And the government is using any and everything necessary to quell this uprising while showing to the rest of the world that Syria is fine and that apart from a few armed gangs that are looking to destabilize the country; everything is pretty much normal in Syria.

Many have wondered: why aren’t there so many people protesting? Why are we not seeing millions filling squares all over the country, or at least in Damascus, as happened in Egypt and Yemen?

The answer to this is twofold:
1. Protesters are literally being shot at!

There are numerous videos that clearly show security forces and army units shooting live rounds at protesters in plain site and broad day light. To make it worse, security forces are stationing at hospitals as well to make sure they prevent those who are wounded from receiving proper treatment. There is news of many doctors and nurses, especially those working in the ER who have been reprimanded, beaten up, arrested or even shot at because they were caught helping the wounded from the protests.

Syrians living in Syria aren’t allowed to whisper anything relating to the uprising unless it is a repetition of government media. Anyone who says otherwise is quickly branded a traitor, an agent of the West and is immediately whiskered off to the nearest Mukhabarat (security services or CID) station for “questioning”.

If two Syrians who are strangers to one another meet by chance outside Syria, chances are they will not discuss the events unfolding in Syria today because each one will be worried that the other may be Mukhabarat. Yes, Syria’s Mukhabarat work outside Syria too, not as spies against foreign countries, but as spies assigned to monitor what Syrians are doing and saying.

This is a well known fact from before the uprising. If a Syrian living abroad makes the mistake of speaking up in front of a Mukhabarat, a report will be written about what transpired and sent to the authorities in Syria. The person who made the statements will either be put on watch or placed under arrest as soon as he/she enters the country (depending on the severity of what was said).

People inside and outside Syria are very scared. And while we admit that there are many who would defend and fight for this regime, we can also safely say that the majority wants to live a life that is free and dignifying. Over 40 years of iron-fist rule meant that people have found ways to cope. They found the pockets that should be filled to make their lives easier, the methods to follow to stay out of trouble and what and what not to say to please the ears of the Mukhabarat.

Some of these people are worried that the uprising might disrupt this unholy balance they fought hard to accomplish. They’re worried about the outcome of this uprising. They’re also worried about the chaos and bloodshed the country will face due to this uprising, especially since they are well aware of the madness of the regime. A madness that knows no boundaries. A madness that is being revealed day by day in the face of these events.

This is the moment of the division bell. Stability + oppression vs. instability + freedom, some are going the distance, willing to pay the price no matter how costly it may be. Some claim to be more rational, more mature, accepting the status quo as a price to pay for the stability the government has provided. For a movement that is primarily instigated by the youth, perhaps a lack of maturity is what mars it. But there’s also determination and a strong will to change.

Only time will tell who and what prevails. I am all for stability, but I sure hope that oppression doesn’t gain the upper hand. The notion that stability and security only comes if oppression is practiced is a notion I deeply disagree with. I hope the courage of the Syrian youth braving those bullets in the streets of Homs, Hama, Daraa and elsewhere mutes the chimes of that division bell and unites all Syrians in a path towards freedom and dignity.

Born and raised in the UAE, a Syrian national, and a Human Resource Manager at a contracting company. I'm most interested in politics in the Middle East in particular and the World in general. I scan the news realm on a daily basis and write what I feel and think about it, and how occurrences may or may not be related to each other. My posts reflect my opinion and thoughts and no one else's. You can follow me on Twitter: @Khaledtron Or check my blog site: http://measternpoles.blogspot.com

One Response to Syria: Fear Versus Hope on a Knife Edge