Syria Jails Blogger: A Courageous and Committed Critic of the Assad Regime 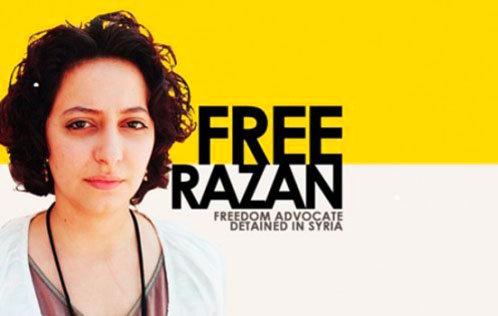 She was sitting in her favourite spot in Damascus, a table under the tree in the cafe in the grounds of the National Museum of Damascus. That was the first time I met Razan. It was 12 October 2007, although we’d been emailing and commenting on each other’s blogs for a few months before that. Now she’s in prison.

I can’t claim to be a friend of Razan. In fact, I think she’ll be quite furious that I am posting about her. We fell out over politics at the start of the uprising, and we haven’t talked since. It was in the days when I still believed in the regime’s promises of reform, and still held out hope that Bashar could turn the situation around.

Razan never believed that. That first day we met, we walked through the streets of the Old City, talking quite loudly and openly about democracy, about repression, about the post-Assad era. She did the talking, I played the looking-scared role.

But unlike me, Razan is courageous. She has firm beliefs, and she doesn’t let friendship get in the way of them. She dedicated a year of her life to the aftermath of the Israeli war on Lebanon in 2006 and another year to helping victims of the Nahr Al-Bared conflict and then threw herself into the campaign against the Gaza massacre in January 2009.

Razan was one of a handful of activists who dared to turn up at candlelit vigils outside the Tunisian and Egyptian embassies in Damascus in January. And even when the group was met with beatings, threats and detentions, she continued to attend.

She was anti-Bashar at a time when the rest of us believed in the promises. She is outspoken. But she still refuses to countenance a Nato attack while others beg for American jets to fly over Damascus.

Razan combines the fearsome intellect of an academic with the tireless passion of an activist. Now she’s another number. Another one of the thousands of prisoners of conscience – people detained because they believe in something different to those in power.