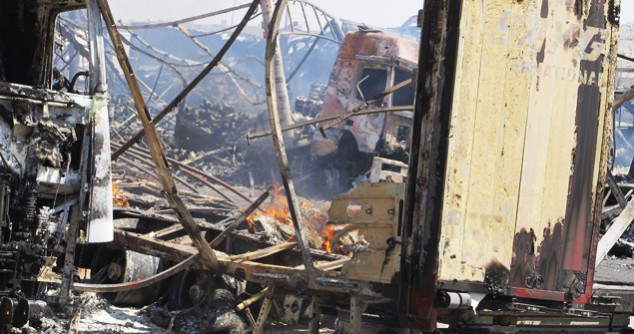 Twenty-four hours after a bomb killed three of the most important regime hardliners in Damascus, rebel forces took over the main border crossings to Turkey and Iraq. Though the current state of affairs is murky, latest reports indicate that the rebels still control all the Iraqi border crossings.

Importance of the Borders

Two weeks ago the rebels managed to take a Turkish border crossing briefly but not only was it retaken by Syrian forces but the Turks closed the crossing when it was under rebel control, so these recent events are not unique. Nevertheless, coming in the aftermath of the rebel surge that began with Operation Damascus Volcano, these incidents highlight that the rebels are gaining in strength relative to the Syrian armed forces.

Holding a border crossing is important. Theoretically, it could facilitate far easier the shipping of money, weapons, goods, and people into Syria. Yet Syria’s 2200km of land and sea borders have been porous for months. It has been the explicit policy of Qatar and Saudi Arabia at least to supply the rebels with some combination of money and arms since February and though uncovering concrete evidence of money trails or weapons shipments is notoriously difficult, it is reasonable to conclude that they have been true to their word.[1]

Indeed, one can observe the number and size of the weapons belonging to the ‘Free Syrian Army’ increasing steadily and it seems likely that their recent successes would be fuelled by some form of significant support, be it in terms of money, weaponry, or training.[2]

The international community is well aware of just how porous the Iraqi-Syrian and Turkish-Syrian borders are. It is with Turkish connivance that their border area is seemingly awash with supplies and Special Forces of all stripes while one of the key tribes living across the Iraqi-Syrian border is the Al Shammar. Not only was the mother of King Abdullah of Saudi Arabia an Al Shammari but one of his many wives is from that tribal confederation too; the links are strong along the Euphrates for Saudi Arabia.

If the rebels can take, hold, and consolidate control of significant chunks of land in Syria, ideally abutting a neighbouring country as most of the more transient ‘zones’ have been thus far, then this is potentially of huge strategic significance.

In the Libyan operation the fact that the rebels so early on had a significant base from which to operate – Bengazi and its environs – was key. This meant that there was an area in which the rebels could congregate and begin to undertake a meaningful assessment of their inventory and capabilities. Moreover, these safe areas were critical to the influx of foreign support. The Special Forces of Qatar, for example, that played an important role in Libya,[3] are understandably risk averse: seeing one of their soldiers captured by loyal Government forces would be devastating. Yet if there are reasonable guarantees of a safe zone in which to operate, then one can expect more support from countries such as Qatar.

Nevertheless, Russia, Iran, and Hezbollah will not give up. Thus far this triumvirate has done its utmost to ignore the reality of the situation, disregarding the brutal humanitarian crackdown, in the vain hope that somehow Syria will return to the status quo ante bellum. At the beginning, from a cold, realpolitik point of view, there was a chance that Assad could have nipped the rebellion in the bud and their stance would – from their point of view – have been vindicated. Yet this is not what has happened and for some months now the three have continued their sunk cost accounting; ploughing on heedless of the genuine change in the status quo in Syria.

Hamas made the tactically astute move some months ago of distancing itself from Syria,[4] despite the support that it offered over the years. But only a day after the devastating rebel attack on Syria’s elite, Hezbollah’s leader, Hassan Nasrallah, gave a defiant, resoundingly pro-regime speech as a desperate attempt, it seems, to forestall the inevitable demise of the Assad regime.[5] He sought to remind his followers of Syria’s critical role in supporting and arming the group in their struggle against Israel. By raising the spectre of Israel he is not very subtly trying to use the Middle East’s perennial political distraction to divert attention from Assad’s brutality. For once, he will surely fail.

Rational political calculus would dictate that Russia and Iran are working on a Plan B. Their forlorn goal of Assad staying in power is no longer viable. Their options for retaining a significant say in the future of Syria; access to the Mediterranean and checking Turkey’s influence (for Russia); and access to the Levant (for Iran) are slim to non-existent. Any kind of a candidate that could offer Iran and Russia such promises after the bloodletting brought on by Assad would be unacceptable to any future Syrian alliance. Indeed, it appears that Russia and Iran have almost guaranteed their estrangement from a future political arrangement by virtue of their political and material support for (and indifference to) Assad’s brutality.

While they may realise the futility of their position, without a viable exit plan they may feel they have no option but to carry on regardless. Better to accept their position in Syria is lost than accept this reality and be humiliated in a policy reversal.

Iran will react to this by upping their efforts to destabilise any transition in favour of palatable candidates that they will support. Given the make-up of the polity in Syria and their levels of penetration over the years, Iran may be able to retain limited operational capacity in a future Syria, even if it pales in comparison to their prized role in past.

Russia’s reaction, meanwhile, is more difficult to assess for they are engaging in a significant gamble. Clearly, Russia is largely unfazed about alienating swathes of the Middle East not to mention the majority of Syrians, believing that in time their position can be reasserted reasoning that states in the region will always need a counterbalance to the West, either diplomatically (security council votes), politically (backing certain politicians), economically (lucrative contracts or sanctions busting), or militarily (selling otherwise unavailable weaponry). Aside from the concern of taking a resolutely cold war mindset and applying its logic to the Syrian uprising in the midst of the Arab Spring in 2012 in an era of rising Asian powers, there is a potential hamartia in this plan.

Russia would do well not to underestimate the depth of the hatred it is fostering. Certainly, the next political class in Syria may see the advantages of engaging with Russia for one reason or another, but the public in Syria as elsewhere throughout the Arab World are no longer passive in politics and may not countenance such a move. Certainly, if Assad is foolish enough to use chemical weapons and were Russia still to play its perennial blocking role as one might expect, talk of an embargo of Russia across the Middle East would doubtless surface at the very least.

Western and Arab States cannot merely berate Russia and Iran; instead, they need to – as unpalatable as it may be – deal with their stance and try to find a way for these key states to deescalate their positions. If this were the 1940s, then the great powers would slide a note across the table to Russia, noting that they could retain x% influence over the future Syria, as Churchill did to Greece and other European nations in Moscow in 1944. But in a vastly different age where no such agreement could be enforced or countenanced, there are no obvious options available.

One alternative would be to cut Russia in particular out of discussions; bypass the UN Security Council entirely, while trying to mitigate their pernicious influence in Syria by upping the levels of military support using the new zones and suggesting and equipping an assault on the Russian port of Tartus to block off a key transit point for Russia’s reinforcements. This kind of bitterly difficult calculation would rely on the logic of greater losses of life in the immediate term for saving lives in the longer term and can only be conceived after deep deliberation not only of the logic of supplying of weapons but of the post-Assad Syria political makeup.