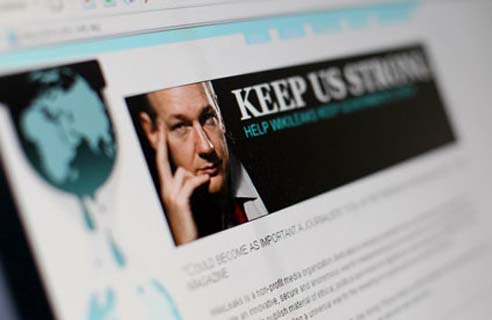 The WikiLeaks vs. the US government saga started in July, when 77,000 secret US documents directly relating to Afghanistan were made available to major media organizations. Many of us shook our heads with a mixture of disgust and vindication. We had long been aware of the brutality of the war, and the corruption of its benefactors. Now we finally had written, uncontested proof.

The Afghanistan War Logs were revealing and damning. They were filed by soldiers and commanders in the field. Despite the largeness of their size, they constituted a decipherable narrative, a sorry story to told and discussed.

The Iraq War Diaries also resembled an unmitigated disaster for US war plans. 391,832 classified military documents were published on October 22, revealing the extent of the calamitous invasion, occupation and ‘state building’ underway in Iraq.

The value of these finds – representing the largest leak in history – was unmatched. It effectively brought to an end the illusion that all was well in Mesopotamia. As with the Afghanistan documents, these files too constituted a narrative, albeit an extremely long and disturbing one. The fact that 15,000 Iraqi deaths are now officially included in the Iraqi death count is in itself a remarkable achievement.

The leaks regarding Afghanistan and Iraq were related. The much touted ‘success’ of the surge in Iraq under former US President George W. Bush is being repeated in Afghanistan under current President Barack Obama. The same haughtiness, language, and even strategies are now being duplicated. Thanks to the logs and diaries, now we know we are being fed half-truths. We can see through the dodgy numbers, the fabricated estimations, the flashy and dishonest language of politicians and leaders. Never again should anyone claim a lack of knowledge of civilian casualties, detainee abuse, corruption, and very shifty war goals.

On November 28, the State Department was faced with another leak and embarrassment. 250,000 US diplomatic cables were released, divulging everything from the US’ belittling judgments of the supposedly poor fighting abilities of British soldiers in Helmand to the unwelcomed camaraderie between Russian Prime Minister Vladimir Putin and Italian Prime Minister Silvio Berlusconi, from Qatar’s alleged “(hesitance) to act against known terrorists” to Hezbollah’s alleged attainment of new and sophisticated weapons through Syria.

Much of what has been disclosed was known, expected or realized through a simple exercise of deductive reasoning. In the case of Russia, cables, many of which were disclosed to the New York Times and four other major international news outlets, merely demonstrated the limited access enjoyed by US diplomats in that country. This left them reliant mostly on third party accounts, and their own personal interpretations. Their messages, at times, read like unsophisticated blogs, conceited and overly judgmental, if not overly personal.

In the case of Turkey, which seems to be the center of American diplomacy, 7,981 leaked documents reflected a predictable hatred and paranoia towards a country spreading its wings as a regional power – in a region already claimed by both Israel and the United States. According to reports, the comments were almost all negative. Turkish Prime Minister Recep Tayyip Erdogan was reportedly described as an “autocratic Islamist” who surrounds himself with an “iron ring of sycophantic (but contemptuous) advisors.” Ahmet Davutoglu, the foreign minister, is described as “extremely dangerous,” with neo-Ottoman ambitions.

While there were numerous insulting comments about the leaders of almost all the countries discussed in the cables, some revelations were particularly suspicious. For one, it seems strange that Israel, a nuclear-power with ongoing military adventures was spared much of the embarrassment. Iran’s nuclear program-related documents were bewildering, as they comprised the only case with a consistent and consequential narrative. This was embraced by the Israeli Jerusalem Post, which described the findings as vindicating to Israel (because the leaks alleged that the desire to eliminate Iran’s nuclear program was also shared by others in the region). The timing of this revelation seems suspicious, in light of Iran’s scheduled nuclear talks in Geneva, and the increasingly warming of relations between Iran and various Arab countries. It seems as if someone, or some entity, wants to enliven the conflict with Iran, and spread it throughout the Middle East.

There was also allegation, made by Israeli Defense Minister Ehud Barak that the Palestinian Authority of Mahmoud Abbas was informed in advance of the deadly war unleashed on the impoverished Gaza Strip, which killed and wounded thousands. Even if someone chooses to trust a source like Barak, there are still no surprises here. Palestinian officials in Ramallah openly coordinate ‘security’ and other issues with their Israeli counterparts at a time that Gaza continues to face the harshness of siege. The Palestinian Authority’s unflattering conduct requires no leaks.

The Turkish mainstream daily Aksam dubbed the leaks “The September 11 of Diplomacy”. And like September 11, the leaks will likely reverberate in their impact on the international stage for years to come. There is no question that the embarrassing disclosures would make every world government thinks twice before sharing any new intelligence with US officials. The US officials will think twice before choosing their words.

But that aside, it must be stated that some US diplomats – unlike the top politicians in Washington – seem to in fact hold themselves accountable to the declared policy of their government. Their repeated emphasis on democracy, corruption, and so on in their private messages indicate that they are genuinely focused on these issues, despite the fact that they serve a largely frivolous and propagandist role in the overall policy of the US government.

Finally, one must admit that, unlike the Afghanistan and Iraq leaks, the latest revelations were of hardly any service to the cause of justice and global peace. They simply showed the inner workings of US diplomacy, with all of its good points, flaws, limits and shortcomings.

Despite their high number, the documents raised many questions, but actually answered few. They only confirmed existing beliefs, ranging from the widespread corruption in Afghanistan to Berlusconi’s “frequent late nights and penchant for partying.” But since more are coming, one can only wait and see…