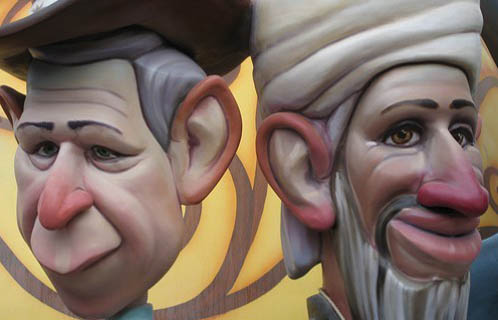 The Arab revolutions have challenged many conceptions about change in the Arab world. They have also challenged perspectives regarding several key players in the region, including Al Qaeda and other extremist organisations whose ideologies have been undermined by recent events.

Osama bin Laden’s death may yet play a role in destabilising Al Qaeda but the Arab revolutions had already essentially destroyed the foundational arguments which Al Qaeda has been largely dependent on for the past 15 years.

The first of these arguments is that corrupt Arab regimes can only be overturned through violence. As recent history shows, this strategy has not been successful in any of the Arab countries that have experienced protests. It was peaceful and unarmed popular movements that ousted some of the strongest security-based regimes in the Arab world – Tunisia and Egypt’s.

Another of Al Qaeda’s arguments is that capturing the attention of the global mainstream media cannot be accomplished except by large-scale terrorist operations which result in massive destruction. Given the immense devastation from such attacks, the media has no choice but to cover Al Qaeda’s activities and ideology, including its perverted religious justifications for killing civilians.

The Arab revolutions, however, were able to attract global media coverage of peaceful protests, and more importantly, were able to change the ugly perception of Arabs and Muslims in the West due primarily to Al Qaeda’s violent actions in the past several years. The revolutions instead present an image of organised, educated and highly efficient youth who are committed to non-violent action to create positive change.

Al Qaeda also claims that it speaks on behalf of oppressed Arabs and Muslims. However the Arab revolutions show that Al Qaeda’s goals differ from the aspirations of the majority in the Arab world. The demands of revolutionary youth centre on freedom, dignity and democracy. Unlike Al Qaeda, they do not call for an Islamic state, the application of a conservative interpretation of Islamic law, or a war against the West.

All social groups and all segments across the political and religious spectrums came together during the recent protests. Secularists joined youth from the Muslim Brotherhood in Tahrir Square, and young women wearing jeans stood next to others wearing the hijab (headscarf). Christians, leftists and traditionalists stood with them.

Al Qaeda believes there are two sides to the world: the side of good – comprised of Al Qaeda and similar groups – and the side of evil – which includes anyone – Muslim or non-Muslim – who does not subscribe to its agenda. This perspective finds similarities in former US President George W. Bush’s rhetoric, which also divided the world into those who are “with us” and those who are “against us”.

Instead, the Arab revolutions have shown that the world need not be divided into two “sides”. Western media sometimes literally stood side-by-side with Arab and Muslim protesters, and both the general public and the elite in the Arab world, as well as political leaders in the West, voiced support for these revolutions.

The most important arguments on which Al Qaeda has been founded over the years are being undermined. It is possible that the beginning of its end has begun.

Khaled Hroub is the Director of Media Programme of the Gulf Research Centre and the Arab Media Project (CAMP) at Cambridge University.

One Response to Simplistic World View Quashed by Arab Spring