Sharia Law is ‘… A Great Threat to U.S Freedom’. Really? 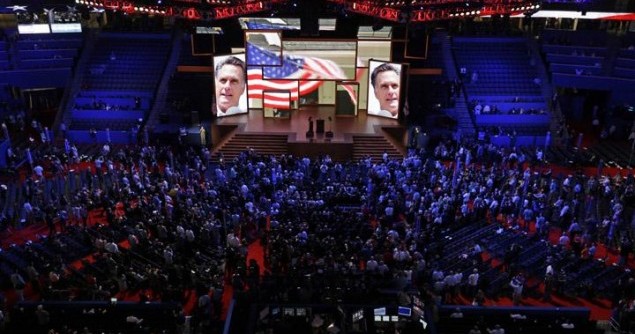 AS delegates gather tomorrow at the Republican National Convention in Tampa, Florida, to come up with a final solution to the threat America’s women and Muslims pose to Western civilization, I’m reminded of what “Life in Hell” cartoonist Matt Groening once wrote in his strip. I’m paraphrasing here, but he asked whether registered voters of the Republican Party should be held accountable for crimes against humanity. Funny 20 years ago. Not so funny now.

Since last week, Republican delegates have feverishly worked on the party’s plank for a platform that defines its position on a wide range of social issues that is an all-out assault on Americans. The 50- to 60-page document is a manifesto that tells us — ignorant voters — how we should feel about women’s reproductive rights. The platform, following approval from the delegates, will also presumably redefine sexual assault since we recently just learned from Missouri Republican congressman Todd Akin what constitutes a “legitimate rape.”

The Republicans want more guns on the street because we also learned that more weapons will prevent murders like slayings 12 people in a Colorado movie theater and the six Sikhs shot to death in their place of worship. And to make sure there is no doubt the Republican Party wants our freedoms protected, they seek to outlaw Shariah in American courts, because, well, because the American Muslims who make up 1 percent of the US population might take over our legal system, and impose stoning and beheadings and mandate child marriages.

What didn’t make it into the Republican plank for the platform was proposed language that would further marginalize Palestinians in the occupied territories that even the Israelis would have a hard time endorsing. Perhaps that will get approval in 2016. The platform supporting a ban on Shariah reeks of the conspiracy theories of Muslim fifth columnists infiltrating the courts and high levels of government.

Kris Kobach, secretary of state for Kansas, pushed for the ban. He’s the guy who authored Arizona’s SB 1070 that requires law enforcement to arrest any foreigner who does not possess alien registration documents and to establish an individual’s immigration status during traffic stops. The law also imposes fines for anybody who hires, gives shelter or transports unregistered foreigners. The law is perhaps the toughest anti-immigration enforcement since the Depression when California and other states deported a half-million Mexicans by the busloads to Mexico regardless of their immigration status and without due process.

Kobach’s Arizona immigration law targets Mexicans while his battle against Shariah, disguised as preventing the application of international law in US courts, zeros in on Muslims. Kobach, and his fellow Republicans seem unconcerned that anti-Shariah legislation would upend the court system on even the most routine civil cases. Since 2010, more than 20 states sought to impose or passed anti-Shariah legislation. Most states don’t mention Shariah, but Richard Thompson, president of the ultra-conservative Thomas More Law Center, said “Shariah law is the thing people think about” when lawmakers introduce such legislation.

When Newt Gingrich, who sought the Republican nomination for president, said, “I believe Shariah is a mortal threat to the survival of freedom in the United States and in the world as we know it” he pretty much summed up Republicans’ attitude toward Muslims without really knowing what that mortal threat is. He never bothered to explain his understanding of Shariah because he has no understanding. But his dire warnings of the imminent demise of the US legal system helped establish a path for the Republican Party to deter American Muslims from exercising their legal rights to use the courts to resolve domestic and commercial issues.

Consider the recent poll conducted for the Arab American Institute. The poll found that 47 percent of Republicans have an unfavorable view of Arabs and Muslims while only 35 percent had a favorable view. Fifty-six percent of the polled Democrats have a favorable view of Arabs and Muslims with 23 percent saying they had an unfavorable view. Only 25 percent of the Republicans polled said they were confident a Muslim American could perform a job considered influential in US government. And 51 percent said that a Muslim American’s ethnicity would influence their decision-making.

Given these attitudes it’s likely delegates this week will approve the Republican Party platform as submitted. Some delegates see such extremist positions as unrealistic and could hurt the party. But it’s difficult to sympathize with the cooler heads of the Republican Party. They remain loyal to a group that is no longer the party of Lincoln, Eisenhower and Reagan, but a party determined to subvert the US Constitution and the Bill of Rights in the name of patriotism.

One Response to Sharia Law is ‘… A Great Threat to U.S Freedom’. Really?