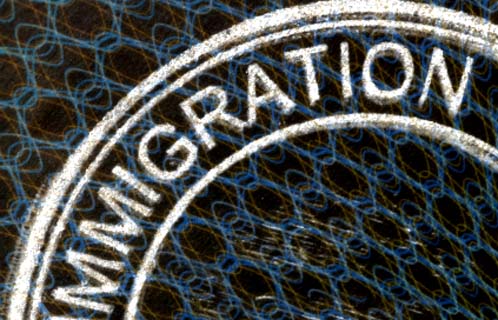 In the UK, Prime Minister David Cameron delivered a major speech on the subject in the run-up to the forthcoming municipal elections. He said that between 1997 and 2009 – during which time the previous government was in office – 2.2 million more people came to live in the UK than left it. He spoke about the problems that this level of net immigration brought with it – particularly, difficulties in maintaining social cohesion.

He announced a member of measures designed to reduce net immigration to tens of thousands rather than the hundreds of thousands of previous years. Measures include tightening the criteria for student visas and stamping out abuses of the points-based work visa system designed to fill genuine skills gaps in the workplace.

He also signalled the government’s determination to reform the welfare system, stating that “migrants are filling gaps in the labour market left wide open by a welfare system that for years has paid British people not to work”.

Meanwhile, Saudi Arabia is poised to announce new plans to hasten the replacement of foreign workers with Saudis. Britain’s eye-watering net immigration figures are a relatively new phenomenon. Saudi Arabia, on the other hand, has long depended on foreign workers not only for its rapid development but also to carry out menial jobs that its citizens are reluctant to take.

Previous Saudization initiatives have met with limited success. In recent years a population explosion has resulted in very high levels of youth unemployment. Unemployment has, in turn, led to social problems – increased drug abuse, petty crime and the radicalisation of many young people who feel that that their lives have no meaning.  Many young Saudis also find it difficult to find affordable housing, get married and raise families.

While David Cameron’s government is seeking to reduce immigration by reforming the UK’s social welfare system, and making it less attractive for people to rely on benefits rather than work, the Saudi government is boosting its social safety net.

It has introduced unemployment benefits and announced massive affordable housing projects. It has also ramped up its spending on education – both on state education and by paying for yet more students to study at foreign universities. All up, the new measures announced this year will cost the state in excess of $37 billion.

As a side issue, Cameron’s measures may have an unintended impact on the Saudis. There are many thousands of Saudis studying at UK universities. A number of them come to the UK for a preparatory year that enables them to meet the entry requirements set by the universities. The Saudi government requires single female students to be accompanies by a guardian – typically a family member. Since one of Cameron’s objectives is to reduce the amount of relatives and dependents accompanying the students – he stated, for example, that family visas will not be available for students below postgraduate level – whether the new visa regulations result in less Saudis studying in the UK remains to be seen. Should this be the case, expect howls of protest by UK universities that rely increasingly on fees from foreign students.

So while the United Kingdom is looking to cut back on its welfare system, the Saudis are increasing theirs. There are many reasons why they would want to do this. Chief amongst them is to pre-empt the kind of unrest seen elsewhere in the Middle East. But introducing monthly payments for unemployed young Saudis certainly increases the challenge of getting them into work, and of reducing the eight million-strong foreign workforce.

There is another demographic issue that faces the Saudis. Today’s Arab News runs an article about foreign workers who were born in the Kingdom. In Saudi Arabia-born expats face an identity crisis, Ibrahim Naffee estimates that there are up 800,000 workers and dependents in this situation. Of these up to 300,000 could be third-generation expatriates.

These are people who see Saudi Arabia as home, and yet do not have the rights of citizens. They grew up in the Saudi education system, speak like Saudis and worship in the mosques alongside Saudis. But their presence depends on the continuing renewal of their residence visas, and at any time they can be sent back to countries of origin that are, in their eyes, foreign.

Theoretically, it would be straightforward for the Saudis to grant second and third-generation expatriates citizenship. Resulting increases in social costs would be relatively affordable. And by naturalising nearly a million residents, you could take the cynical view that at a stroke they would dramatically improve their Saudisation levels.

Yet there would most likely be social problems. Among Saudis who trace their ancestry from the original tribal inhabitants of the Arabian Peninsula – particularly those from the Najd, the homeland of the Saudi Royal family – there has always been an undercurrent of prejudice against nationals of foreign origin, no matter how far back those origins go.

The Hejaz – the Western region of the Kingdom that encompasses Jeddah, Makkah and Madinah – has traditionally welcomed immigrants. Over centuries, many who came for the annual pilgrimage to Makkah never left. And many of the merchant families that grew their businesses in the Hejaz before its incorporation into the Kingdom and in its early days are  among the most wealthy and prominent businessmen today. The Al Rajhi, Mahfooz and Bin Laden families originally came from Yemen. The Alirezas from Persia, the Pharaons from Syria.

But these families, and hundreds like them, were integrated into local society before the massive influx of immigration that took place from the 1970s onwards. Whether the current citizenry of Saudi Arabia would welcome hundreds of thousands of new Saudis – many of them of South Asian origin – is questionable.

And should Saudi Arabia in the future introduce a greater level of electoral democracy, there are bound to be concerns about the influence that sizeable ethnic minorities could exert on the political process.

I don’t see this as exclusively a Saudi issue. Some of the other oil-rich Arab states have an even higher proportion of foreign workers. Although Qatar and the UAE started their development programmes later than the Kingdom, over time they could have second and third generation foreign workers on whom they will depend, but who do not have the rights of citizenship.

It is quite possible that these workers will come to resent their status and start pushing to become national of the countries where they were born and grew up. One only has to look at the concern among some quarters in Bahrain over the naturalisation of large numbers of foreigners in the past twenty years to see that there are many nationals of other Gulf countries who could object to what they might view as the dilution of their birthright.

In Britain, as in some parts of the Middle East, we have a long tradition of absorbing immigrants who have come to the country both for economic reasons and to escape persecution elsewhere. David Cameron believes that we have reached the limit of our capacity, and that we need urgent action to address the problem.

But even the sizeable influx of people into Britain in recent years pales in comparison with immigration into the GCC states. Add to the mix pressure both on the borders of the European Union and the GCC from poorer populations in neighbouring countries, and you can predict with confidence that immigration will be high on the agenda in both regions for years to come.