Saudi Education – A Fight to Enter the 21st Century… 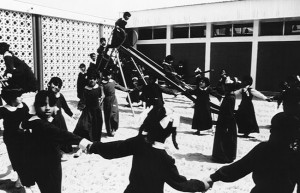 Two areas that ultra-conservatives have a stronghold on in Saudi are the judicial system and the education sector. These ultra-conservatives do not pay much heed towards the banking sector, healthcare, commerce and all other areas. But when it comes to our courts and our schools, they just won’t budge. In this post I’m going address  the education sector and their control over it.

This control goes way back to 1960 when it was decided that girls will be allowed to get an education. Men from all over but mainly from Qaseem travelled to the capital to express their opposition even though the girl schools were completely gender segregated and had a separate administrative body overseeing it from the education ministry overseeing the boys’ schools. Throughout the years, the ministers of girls’ education were overwhelmingly long-bearded muttawas and the whole ministry favored employing people who were religiously conservative. Those were the days when mirrors were banned from bathrooms, and uniforms that define the waist or have a belt were against the rules even for teachers. All our beautiful little girls were dressed in bland gray or brown cloth cut into the shape of your grandma’s full-length and long-sleeved house dress. If they cut their hair too short they were punished, and if they styled or let their long hair down they were punished. Stories about principals putting Vaseline in girls’ hair as punishment abound.

Around 1974, the idea that elementary schools would not be gender–segregated was floated around. At that time Shiekh Bin Baz and Sheikh Bin Othaimeen were the most prominent religious leaders. A news organization recently unearthed correspondence that is alleged to be between the two sheikhs in which they were conspiring on how to stop the sinful mixing of boys and girls in elementary schools. Scans of the handwritten letters are also shown in the report.

The country’s concession to the religious establishment’s control over girls’ education stayed pretty much the same through out the 1980s and 1990s. Things changed on the 11th of March 2002, but only after 15 girls died in a fire after the PVPV obstructed the entrance to the school. The PVPV did not let out students who weren’t covered and did not allow the civil defense to enter the school. HRW and BBC Reports of the incident.

The separate ministry responsible for girls’ education was absolved and the administration of girls’ schools was put under the care of the main education ministry that was already overseeing the boys’ schools. How has this changed things on the ground? Not much. Most girl schools are locked during school hours. Physical education is still banned for girls. Subjects are still gender-specific, so that there’s a different science book for girls than the one for boys and so on for all subjects. Some of the things that have changed are the uniforms. For the past three years, elementary girls wear a plain white or striped blouse with a sleeveless gray overdress and the same for older girls except that the dress is navy. Both have defined waists.  It’s an improvement.

The biggest changes are that since last year, principals are given the freedom to choose to allow boys from first to third grade, on the condition that classes would be segregated. The point being that boys at this young age would be better off taught by female teachers and to open up more positions in the education sector for unemployed women. This gender mixing of course is being fought by the religious establishment just like in 1974. Shiekh Yousef Al Ahmed escorted a band of muttawas to object this decision at one of the education ministry offices. A judge published a piece on a hypothetical  situation where a first grade boy is so attracted to his teachers that he flunks on purpose to stay in the girls’ school for as long as possible. Then 20 years later he still can’t stop thinking about them so he finds and hooks up online with one of his elementary teachers resulting in her divorce. In their minds this is not at all far-fetched.

So what’s a typical school day in a Saudi girls’ public school? The day starts with assembly at 6:45 am. First class starts at 7 and the school day ends at 12:30 pm. Around one quarter of the school schedule for an 8th grade is learning religion.

All that time learning religion and morals and yet our whole society has a culture of unofficially and officially policing each other otherwise we would go wild. After all that religious teaching and our students can’t even Islamically behave in malls so men are banned from entering them without their families because before the ban many harassed and chased women shoppers. Women can’t walk in the streets fully covered head to toe without being harassed. Work ethics, honesty and abiding laws are not widely practiced concepts.  So what’s the point of all those religious classes if they don’t translate into a moral society?

And then there’s all this hoopla about the improvements in the science and math curriculum and that they are comparable to international standards. Let me show you third grade science books. These are the main spreads from the first lesson of each book:

The Saudi text book above. An American text book below.

The Saudi textbook is 145 pages. Most pages only have a few sentences. The American textbook is 495 pages, has a glossary, index, many experiments and most pages contain several paragraphs.

Lastly, there’s the teachers. In all the schools I’ve been in, here in Riyadh and Tabuk, they averaged 30 students per class. Teachers could be given a maximum of 24 periods per week. So if you are a history teacher and each class has two periods, then it’s possible that you would be asked to teach 12 different classrooms. And at 30 students per class, that’s 360 students. That’s quite a feat for a schoolteacher. The workload is only one aspect of  how things are. The female teachers I’ve talked to, also complain about not having any health insurance, about being locked up during school hours and having to convince the principal before being allowed to leave and about gender discrimination when it comes to how pensions are paid out.

I know that the current ministry has big plans for education but they also have mountainous challenges. The religious establishment having had control for so long, their people are in almost every office, dragging their feet against anything that even smells western. The current teaching staff is a product of the very same system and has not known any other, getting them to change would be a miracle. Miracles have been known to happen. Right now praying for one is the only thing I can do.