Salafists and Military in Open Conflict: What Next? 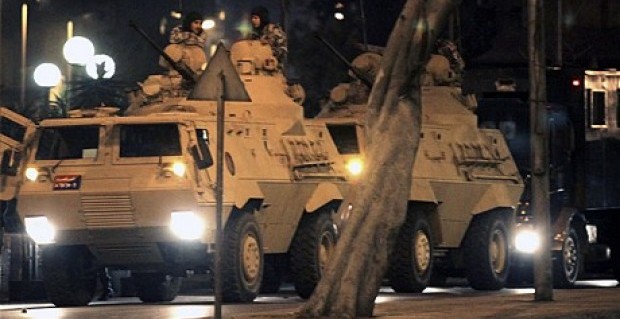 The Egyptian military pushed back Friday against largely Salafi protesters, who insisted on attempting to get near to the Ministry of Defense in the al-Abbasiya district. When they tried to cut through the barbed wire keeping them off the MoD grounds, troops used water cannon and teargas to disperse them, and charged the crowd, pushing it back. Hundreds were left wounded, and at least one person, a soldier, was killed.

There were some April 6 Youth leftists at al-Abbasiya as well, but when the violence started, they withdrew to Tahrir Square.

I saw Maj. Gen. Mukhtar al-Mullah, speaking for the military, on Thursday warning them against this tactic, saying that if troops feel they are under attack, they have a right to defend themselves.

The rallies in front of the Ministry of Defense by Salafis or Saudi-style hard line Muslim fundamentalists were intended to overturn the decision of the administrative court that disqualified Hazim Salah Abu Ismail from running for president because his mother had, late in life, taken American citizenship. Abu Ismail drew special support from the Salafi Muslims, represented in parliament by the Nur Party.

The Arabic press suggests that the relatively secular officers are especially afraid of the Salafis. One commander was quoted as saying, “These people believe that if they kill a soldier, they are going to heaven. They brought knives. We had staves and tear gas grenades. What did you expect us to do?” Salafis are accused of throwing stones at the soldiers, and Egyptian t.v. showed video of wounded troops.

One report coming out Friday suggested that the military had arrested 50 armed men in a mosque, some of them with Molotov cocktails. This sort of scenario may help to explain the al-Abbasiya attack. Did they think the Salafis might try to launch a guerrilla action against the Ministry of Defense?

In the 1980s and 1990s, the Egyptian military suffered attacks by Muslim radicals, including the Gama’a al-Islamiyyah and the Egyptian Islamic Jihad of Ayman al-Zawahiri, which later became part of al-Qaeda.

From the way they speak, officers such as Maj.-Gen. al-Mullah seem to view the Salafis as in the same category as the radicals, and to fear that they will mount a terrorist strike on the Ministry of Defense.

Many officers in Egypt are relatively secular, and they may fear the Salafi movement at this time of instability. In that case, they’d be happy about the disqualification of Abu Ismail and especially unhappy about Salafi demos to reinstate him.

In contrast, many Egyptian activists believe that the military attacked the Salafis for no reason, to create turbulence in the country as a pretext for making a full-fledged military coup and for cancelling the upcoming presidential elections. The military says they are committed to holding the elections on schedule.

A big demonstration at Tahrir Square, joined by the New Left, the Muslim Brotherhood and the Salafis, appears not to have been molested, and Maj. Gen. al-Mullah had, as I remember, encouraged people to demonstrate there instead.

One Response to Salafists and Military in Open Conflict: What Next?