Romney: A Return to a Black and White Foreign Policy 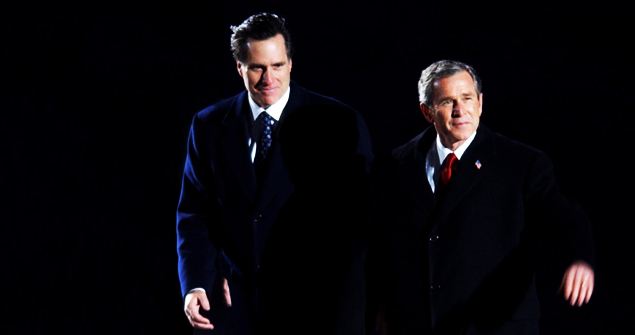 Mitt Romney is suggesting a dangerous return to George W. Bush’s simplistic foreign policy in which foreigners are divided sharply into those who are friends and those who are foes. And only the US has the right to decide which is which.

Unfortunately for Romney’s vision, the reality is different. The old world of a sole superpower has collapsed, and the new powers of China and India have asserted their right to be heard in the world’s highest councils. Major regional powers such as Brazil, Indonesia, South Africa and Saudi Arabia have started to play a crucial global role.

See also: Israel’s Lack of Respect for the US Equals Disaster

For all President Barack Obama’s failings, he has recognised the importance of working with other governments, and he freely acknowledges the importance of the world’s multilateral institutions. But pressure from Romney’s Republican campaign in the presidential race may force him to become more arrogant in the use of American power in order to face down the Republicans.

Romney wants a national security strategy based on American strength. He is clear that only American power can provide the foundation for an international system that ensures the security and prosperity of the US and its friends and allies.

In the Middle East, his view of how his “active America” must impose its views is very troubling. While acknowledging the Arab Spring offers “a generational yearning for a better life and for human dignity” Romney moves straight on to comment that the ongoing revolutions are doubled edged.

“The region is riven by tensions, and Iran and Islamist extremists are seeking to influence events and expand their control. The future of democratic institutions in the region — and the security of the United States and its allies — hang in the balance.”

He offers no comment on the development of popular government in many Arab states, but limits his thoughts to fears of Islamist take-overs in Egypt, Tunisia and Libya; and on Iraq he launches a bitter attack on what he calls Obama’s “astonishing failure to secure an orderly transition” which he attributes to Obama’s “naked political calculation or simply sheer ineptitude”.

He welcomes Israel as “the United States’ closest ally in the Middle East and a beacon of democracy in the region, while he dismisses the Arab Spring as “tumult which has heightened Israel’s security problems”.

He describes the regional situation as especially dangerous moment for Israel as it has deteriorating relationships with Turkey and Egypt; and it faces longstanding dangers from Hamas in Gaza, Hezbollah in Lebanon, a violent and highly unstable Syria, and a nuclear-aspiring Iran whose leadership is openly calling for Israel’s annihilation”.

Romney’s answer to the menu of problems that he sees is to promote Israel’s military strength as “the key to negotiating a lasting peace is an Israel that knows it will be secure”, and he adds that he will work closely with Israel to maintain its strategic military edge.

Romney pays no attention to the decades of talks and treaties on Palestine, and simply states that he would “reject any measure that would frustrate direct negotiations between Israel and the Palestinians” and that he “will make clear to the Palestinians that the unilateral attempt to decide issues that are designated for final negotiations is unacceptable”.

He backs this with a threat to the Palestinian leadership that if he was president, the US would reduce assistance to the Palestinians if they continued to pursue United Nations recognition or formed a unity government that includes Hamas, which he described as “a terrorist group dedicated to Israel’s destruction”.

On Iran, Romney proposes a sharp hardening of attitudes. Obama has said that he will stop Iran from acquiring a nuclear bomb, whereas Romney has accepted the much tougher line emanating from Israeli Prime Minister Benjamin Netanyahu that Iran should not even be allowed to have the technologies which might lead to the building of a bomb.

Romney’s answer to enforcing this threat is to launch a fifth round of even tougher sanctions, while making clear that a military option to attack Iran’s their nuclear programme remains on the table.