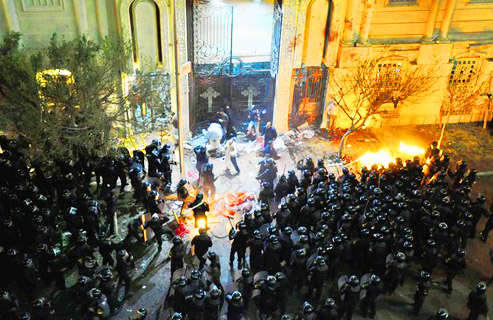 The tragic terrorist attack on a church in Alexandria on New Year’s Eve, which claimed 21 lives and injured hundreds, has shocked Egyptians and increased tensions between the country’s Muslims and Coptic Christians. And while the government, opposition parties and religious leaders have condemned the attack and called on Egyptians to unite, it is evident that reverberations of the incident will be felt throughout Egypt for some time to come.

For years now tension has been rising between the government and the country’s Coptic Church, which claims to represent about 10 million Egyptian Christians, roughly 9 percent of the population. The Church has been complaining over certain laws and regulations that made it difficult to build or restore churches, discriminated against Copts in the public sector employment and interfered in ecclesiastical affairs. But in recent years sectarian agitation has led to violence between Muslims and Christians.

Last year, also on New Year’s Eve, Muslim extremists shot and killed 6 Copts and one Muslim policeman in Nagea Hamadi. The Church and Christian leaders claim that even though the culprits have been caught, the court is yet to incriminate them.

Sectarian tensions are relatively new to Egypt, a country known for its religious tolerance. But the rise of Islamist extremist movements in the 1980s has given birth to salafi schools who took over small mosques and schools and spread their rejectionist principles. Even though the government was able to destroy militant groups, it has failed to contain fundamentalism.

Accordingly, extremists on both sides have charged the atmosphere and while Egypt remained relatively immune to sectarian violence that was spreading in Lebanon, Sudan and Iraq, last week’s terrorist attack marks an important milestone in the country’s political crises.

But while internal factors are partly to blame for the rising friction between Egypt’s two main sectarian components, one cannot discount the fact that external parties may have been involved.

Al Qaida in Mesopotamia, which is believed to have carried out the massacre in a Baghdad church last month, issued a warning that it will also target Egypt’s Christians. The Egyptian government is yet to prove that the Alexandria attack is linked to the same organization. If that is proven it means that Egypt’s intelligence apparatus has failed to detect what could prove to be a crucial security breach and the launch of a new front in the war against terror.

But as the Egyptian government tries to hunt down the perpetrators of the Alexandria attack, it must also face a rising tide of unpopularity led by major opposition parties. In the wake of last month’s general elections and claims that the results were rigged, the government finds itself fighting on more than one local front. The opposition accuses the government of focusing its efforts on strengthening its grip on power, that it had neglected its duty of protecting the people. Moreover, it is now being accused by the Coptic Church and others of allowing a highly charged sectarian atmosphere to reach a boiling point.

But while the government may be accused to neglect, it is important to revisit the issue of religious violence that has afflicted Iraq, Lebanon, Sudan, Iran, Afghanistan and Pakistan since 9/11.

It is important to note that Christians are not the only victims of sectarian terror. Mosques, shrines, religious parades have been targeted indiscriminately affecting Sunnis, Shias and followers of other sects. In fact, even before Christians became victims the mass of sectarian violence was targeted at Muslims. While this phenomenon did not exist before, perhaps only in Lebanon and especially during the civil war, we now see sectarian killings in countries that never had such problems.

And the question is this: who benefits from engaging these countries in such dangerous affairs? During Israel’s war on Lebanon in the summer of 2006 former US Secretary of State Condoleezza Rice described the aggression as the “birth pangs of a new Middle East.” She turned a deaf ear to Arab pleas that Washington intervenes to enforce a cease-fire saying “whatever we do, we have to be certain that we’re pushing forward to the new Middle East, not going back to the old Middle East.”

A year before she spoke of spreading “creative chaos” in the region. This is when Iraq was witnessing the height of sectarian terror and exhibiting every sign of becoming a failed state, along with Somalia.

Conspiracy theories aside it is vital that Arab regimes and people realize that Israel and those who back her stand to benefit from embroiling the region in a religious and civil war. Only Israel gains from a divided Iraq, a broken Egypt, a partitioned Sudan, a war-torn Yemen, a troubled Lebanon and a paranoid Gulf.

Engulfing the region in sectarian troubles weakens the national state and launches a series of crises that cripple the region as a whole, while giving Israel the means it needs to liquidate the Palestinian issue once and for all, away from Arab and regional intervention.

This is not a reprieve for Arab regimes who have failed to embark on genuine political reforms that would have preserved national unity and inoculated countries against foreign intervention. On the contrary it is time that both regimes and citizens wake up to the looming dangers that threaten to destabilize the region and push it into a dangerous course.