Rachel Corrie – Not the First, Probably Not the Last 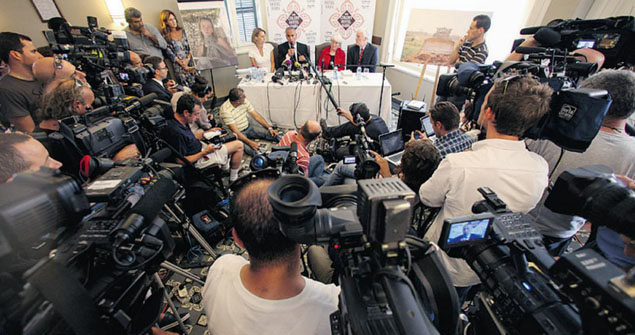 The list below was compiled by the Institute for Middle East Understanding and lists foreign peace activists brutally maimed or murdered by the IDF over the past nine years.

It’s a list of ignominy. It should also be noted that hundreds of Palestinian activists have been similarly maimed or murdered in the same period under similar circumstances at anti-Occupation protest rallies throughout the West Bank:

May 15, 2011 – 22-year-old Palestinian-American student Munib Masri is shot in the back with live ammunition by Israeli soldiers along the Lebanon border while he participates in a march to mark the 63rd anniversary of the Nakba, the expulsion of Palestinians from their homes during the establishment of Israel. The bullet destroys Masri’s left kidney and spleen and broke apart in his spine. He remains in a wheelchair.

May 1, 2011 – 60-year-old American citizen Sandra Quintano suffers two broken wrists and a laceration to her head after being assaulted by Israeli soldiers in the West Bank village of Izbet al-Tabib during a peaceful demonstration against the construction of Israel’s wall, which will cut off villagers’ access to their land.

June 2010 – At a demonstration at the Qalandiya checkpoint in the occupied West Bank in 2010, 21-year-old American artist and student Emily Henochowicz is hit in the face by a tear gas canister fired by Israeli border police. The force of the impact fractures her jaw and orbital bone and causes the loss of her left eye.

May 2010 – American citizen Furkan Dogan is shot and killed by Israeli commandos who forcibly commandeer the boat he’s traveling on in international waters as part of the Gaza Freedom Flotilla. Dogan is shot multiple times in his leg, foot, back, and twice to the head. A United Nations investigation concludes that he and five of the other victims have been shot “execution-style” at close range, finding that Furkan had been shot in the face after “lying on the deck in a conscious or semi-conscious, state for some time.”

March 2009 – Oakland native and nonviolent International Solidarity Movement (ISM) activist Tristan Anderson is shot in the face with a high-velocity tear-gas canister by Israeli forces while participating in a demonstration against a section of the wall Israel is building on land belonging to the town of Ni’lin in the occupied West Bank. Anderson suffers multiple fractures to his skull, a severe injury to the frontal lobe of his brain, and a collapsed eye socket, causing him to lose sight in his right eye. He spends more than a year in a Tel Aviv hospital recovering before returning to the US, where he continues to suffer the effects of his injury and is confined to a wheelchair.

May 2003 – British cameraman James Miller is shot and killed by Israeli troops while filming in Gaza. According to witnesses, there is no other shooting or violent activity in the area at the time Miller is killed.

April 11, 2003 – A week after American ISM member Brian Avery is shot in the face and seriously wounded by Israeli soldiers in the West Bank, British ISM member Tom Hurndall is shot in the head by Israeli soldiers in Gaza while he attempts to help a group of Palestinian children to safety after Israeli soldiers began shooting in the vicinity. After nearly a year in a coma, Hurndall dies in January 2004. Following pressure from the British government and Hurndall’s family, the Israeli army laid charges of manslaughter against a soldier who confessed to the shooting. However critics says the soldier, who is a Bedouin Arab, is a scapegoat for a series of violent attacks on foreign activists by Israeli soldiers.

April 5, 2003 – American citizen and ISM volunteer Brian Avery is shot in the face by Israeli soldiers in the city of Jenin in the West Bank. Lucky to survive, Avery undergoes a series of facial reconstruction surgeries and suffers severe facial scarring. After initially refusing to investigate the incident, the Israeli government subsequently agrees to an out of court settlement paying Avery $175,000.

March 16, 2003 – 23-year-old Washington State native and ISM volunteer Rachel Corrie is run over and killed by an Israeli military bulldozer while trying to prevent the destruction of Palestinian homes in the town of Rafah in Gaza.

The Occupation is unsustainable. It must end. These individuals and all who protest it, especially under the brutal watch of the Israeli security forces, are heroes. The IDF (and Border Police) are murderers. They kill civilians. Unarmed civilians. Who protest for justice and human rights. This is not a defensive army as its name implies, but an army that defends theft and dispossession. Shame.