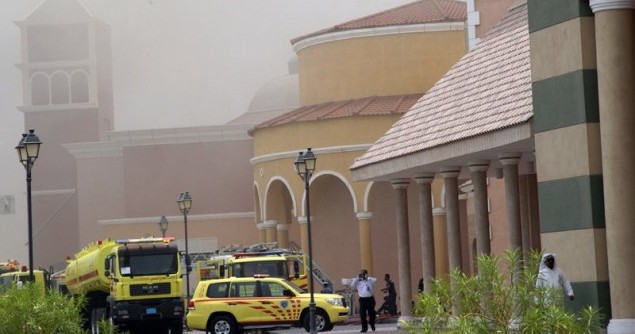 A few months ago when stratfor was hacked and it was discussed endlessly for a few days on the internet, I was struck by the tone of the reporting. In hushed terms, it was described as if a quasi-CIA had been hacked as opposed to a bunch of reporters and interns writing copy. Truly, after reading straftor for a few years on and off, the notion that they were anything other than bog-standard never occurred to me.

Well, it seems that my rating of ‘bog-standard’ was far, far too generous. For they now allege that the real reason for the deadly fire at the Villagio shopping mall in Qatar was because of some kind of Shia splinter terrorist group, seeking revenge upon Qatar for its meddling somewhere in the Middle East.

There are, of course, numerous plausible parts to the story. It is entirely feasible if not certainly true that Qatar as a country has angered a great many people around the region. Many of those angry people are Syrian and Libyan, both of whom have a history, shall we say, of using irregular and asymmetric means of retaliation. The notion that they might attack Qatar is, therefore, plausible. (Let’s forget for the moment that Qatar has been rigorously backing Hamas and – more importantly in this context – Hezbollah for many years).

But, if you’re going to push such a story, really, honestly and truly the very last person that you would wish to quote setting up your thesis is a Sunni Bahraini MP. I mean really. Bahraini Sunni MPs – or rather some of them – spend their lives finding imaginary Shia bogeymen to blame stuff on. It’s practically a sport and an art-form in Bahrain. Nary a semblance of truth, nor a shred of evidence is typically present yet this seldom prevents such gents stoically, studiously, and vociferously ignoring reasoned evidence to the contrary (to wit: the Bassiouni report) and pursuing the ‘Shia are behind everything’ defence.

To me this means that either the stratfor author/intern is:

I’d lean for option (1), but stand ready to be corrected.

So far, there is no evidence to confirm such involvement.

Well imagine that! Isn’t that just super analysis and journalism? Running a story with the provocative title

only to later note that there is no evidence for this?

What other articles could they run with no evidence? George Bush possibly converts to Islam? Saddam Hussein maybe comes back to life? Ayatollah Khameini apparently an avid Twister addict? The mind boggles.

Worse still, this article puts stratfor directly in the same basket as Press TV. They recently ran a story stating that the fire in Doha was the work of the Qatari Opposition and/or the Qatari Royal Family. These stories are worse than Press TV’s usual fare. Don’t get me wrong, its perpetually garbage, but usually there’s a bit more of a serious tone about it, where as these are so egregiously and obviously wrong that one suspects that the authors couldn’t really be bothered to think up a decent or remotely convincing narrative.

Stratfor either need to present some evidence – some anonymous source noting that one Shia person is in custody being worth precisely fudge all – or retract this exceedingly poor article.