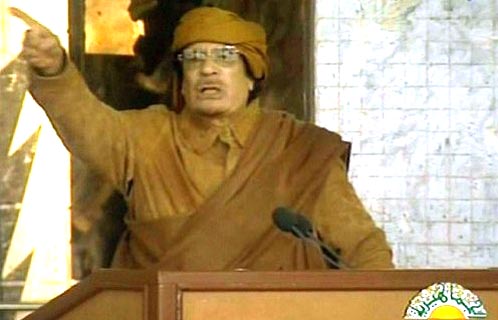 As the world watches Japan, transfixed by the aftermath of a massive tsunami that has probably killed over 10,000 and left half a million homeless, attended by a crisis in a series of nuclear reactors, on the other side of the world the forces of Muammar Qaddafi are advancing on rebel cities, reducing them one after the other with unrestrained aerial bombardment and artillery barrages, as Qaddafi himself threatens to ally with Usama Bin Laden if he is thwarted in his reconquista.

Qaddafi, defiant, told the Milan-based Il Giornale, that he would crush the rebels. “Their cause is lost. They only have two possibilities: to surrender or to flee,” he said. He expressed extreme disappointment in Western European leaders who had come out against his rule. France has recognized the provisional government in Benghazi, David Cameron of Britain has argued for a European-imposed no-fly zone, and even Qaddafi’s old crony Silvio Berlusconi of Italy has turned on him. Qaddafi lamented the banquet of friendship he had thrown for Berlusconi.

Asked if he doesn’t fear Saddam Hussein’s fate, Qaddafi said that if NATO tried to invade Libya and overthrow him, he would leave the international alliance against terrorism and join al-Qaeda in a holy war against the West.

In Libya, Muammar Qaddafi’s military is launching three major attacks against rebels. In the far west near the Tunisian border, they are subjecting Zuara to intensive bombing in hopes of clearing the last rebel stronghold along the Mediterranean to Tripoli’s west.

Qaddafi’s air force is strafing Brega and Adjabiya to its north intensively, giving cover to advancing troops and armor, who have reached the western gate of Ajdabiya. Adjabiya is the last major rebel position before the city of Benghazi, the country’s second metropolis that has been the heart and soul of the rebel movement.

The rebel movement is clearly out-gunned and out-maneuvered, and somehow in the past few days the Tripoli regime has found its footing, proving able to plan and implement a reconquest of the country, after having been ineffectual in the previous two weeks in facing the rebel challenge.

This change suggests to me that the officer corps in Libya finally decided to coalesce around Qaddafi, after some weeks in which its loyalties were undecided.

Qaddafi’s fear of outside interference or consequences from the West also probably declined as it became clear that the Obama administration was forbidding British Prime Minister David Cameron and French President Nicolas Sarkozy from intervening militarily.

In most world forums, the more hawkish Cameron-Sarkozy stance has been blocked. At the G-8, Germany has just opposed a unanimous resolution in favor of a no-fly zone. Japan also correctly raised the point that the G-8 is not the proper arena in which such a decision should be made, but that rather it should be decided by the United Nations Security Council. Russia, a G-8 observer, also objected. (Since the G-8 is just the 8 most prosperous industrial economies, it is an arbitrary body and Japan is right that mere prosperity lends no legitimacy or authority, such that it should supplant the UNO).

Washington, for its part, was reportedly suspicious of the character of the Libyan protest movement, fearing that Qaddafi was right to describe it as heavily Muslim fundamentalist in character.

Having a victorious such government in Libya might in turn have affected the outcomes of the new political processes in Tunisia and Egypt, given Libya’s oil wealth and resources. While the Benghazi provisional government is made up of political unknowns, however, the discourse deployed by the rebels has tended to be nationalist and tribal, and does not resemble that of e.g. al-Qaeda.

Washington appears to have decided it slightly preferred the devil it knew, and that may well be what it gets– though now a wounded devil talking crazily about a global jihad against the West if things don’t go his way.