Preventing Iran from Closing the Straits – Something Not Necessarily So Simple… 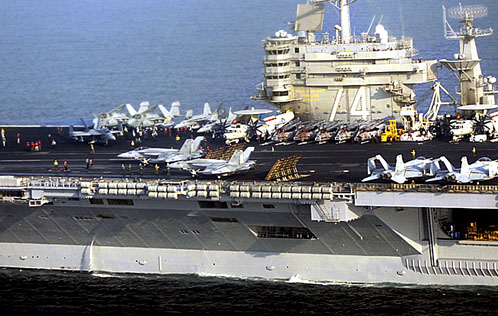 The NY Times today departs from its usual cheerleading of U.S. hawkish foreign policy goals by acknowledging that Iran could close the Straits of Hormuz in the event of a military conflict. It might do so at great cost to itself, but it could be done. Even if it couldn’t, the article estimates that even a minimal dustup there could raise the price of oil by $50 a barrel, thereby raising gas prices in the U.S. easily over $4 a gallon.

Of course, this would cripple Iran’s oil production and shipping capacity, thereby sending its economy into a nosedive. So it would be a game of chicken as to which side could inflict the most damage militarily and economically and which side would say “Uncle” first. Just think about the terribly tender world economy teetering currently on the brink of recession. Those who predict it will be the Iranians might want to think again.

If we cut off Iranian oil shipments, it will imperil the Chinese economy. They aren’t going to take this lightly. Since the Chinese military appears to be itching to teach the U.S. a lesson or two about its own international ambitions, it might offer them an opportunity to attempt to give us a bloody nose. This might involve a military confrontation on Iran’s behalf or it might involve making our lives miserable in the UN Security Council as it deliberates on the foolhardy adventure into which we’ve gotten ourselves.

I’ve just been reading up on the Russian-made anti-ship missile, the Sunburn, supplied to Iran in the hundreds. Despite the fact that Russian military might is generally a paper tiger, this weapon is fearsomely effective. It flies at supersonic speeds (2,100 mph) hugging the ground (as low as 45 feet) and is barely perceptible on radar. It is so fast that ship-board defenses may not even be able to pinpoint its location before impact. It collides with its target at such force that a single well-placed missile might sink an entire aircraft carrier. The missile can be fired by ship, submarine, aircraft or from a truck.

Think of the hundreds of miles of mountainous Iranian coastline that lines the Straits. Think too, of the Iranian supplied missile that nearly sank an Israeli frigate off the coast of Lebanon during the 2006 War. Think three, of the difficulties faced by the Israeli air force during the 2006 Lebanon war in eradicating the Hezbollah missile inventory. It simply could not keep up with the well-hidden missile sites and the sheer number the group had at its disposal. Now think of a far more formidable adversary with more advanced missiles, more resources to deploy and hide them, and more territory in which to conceal them.

No one is saying Iran is a match for U.S. might. But I think there’s a very good chance the Iranians might make us pay for our adventure. Possibly even pay dearly. Imagine the impact that the sinking of even a single U.S. aircraft carrier or ship might have on U.S. morale in the event of conflict. Not that I’m wishing for such an outcome. Not at all. But rather I’m seeking to warn that if we toy with Iran, it might sink a claw into us.

The missile is a short to medium range missile, meaning that the U.S. fleet might have to remain 100-250 miles offshore to avoid them. That would still offer plenty of range for our forces to attack Iran. But it might prevent us from entering the straits directly in order to escort shipping and keep the lanes open. That in turn would decrease the likelihood we could keep them completely open.

The Russians developed such missiles because they knew they could not compete ship for ship or plane for plane with the U.S. military. Instead, they devised a much more cost-effective method of defending itself. A single missile costs less than an entire jet bomber, yet it can take out an aircraft carrier. Iran too knows it cannot compete soldier for soldier with us. So for it, the anti-ship missile is a perfect defensive weapon. The Sunburn is but one type in Iran’s arsenal, possibly the most advanced, but there are many others. It was one of these Cruise missiles (though not the Sunburn) it tested during the recent naval maneuvers it held.

We’ve now passed into far more dangerous stage of conflict. We’re now no longer killing Iranians and exploding their missile bases through covert acts of sabotage. We’ve actually sent an entire fleet right up the enemies you-know-what. We’ve dared them to respond. They’ve retorted angrily that they won’t let us intimidate them and that we’re unwelcome anywhere near their borders. This is a major standoff that can only end badly.

The fact that we’re about to send a few thousand of our own troops to Israel for major war games, where they will be deployed for an unspecified period of time is another warning to Iran that should they consider attacking Israel (even after an Israeli pre-emptive attack) that the U.S. would defend its ally. When you come to think of it, this is an astonishing statement. It means that if Israel attacks Iran first and Iran counter-strikes, we will very likely attack Iran.

I don’t know about you but I’ve been through at least one war too many in the past ten years. We need another one like we need a hole in the head. I’m afraid that Barack Obama is taking us there.

This article was first published on Tikun Olam.