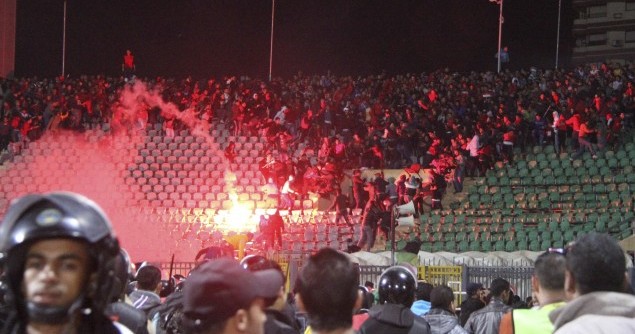 A series of soccer protests in the past week in anticipation of a March 9 ruling in the politically loaded case of last year’s brawl in a Port Said stadium in which 74 fans died has focussed attention on the unaltered practices of the country’s Mubarak-era security forces as well as President Mohammed Morsi’s fragile relationship with the powerful military.

In a telltale statement on Facebook on Sunday, military spokesman Colonel Ahmed Ali denied reports that troops had clashed with police units in the Suez Canal city of Port Said on a day on which a demonstrator and a security officer were killed and more than 400 people injured in five week-old protests. Soccer protests in Cairo meanwhile blocked the road to the city’s international airport forcing visiting US Secretary of State John Kerry to delay his departure by two hours.

Colonel Ali said military units in Port Said where the protests expanded two weeks ago into a broad based civil disobedience campaign were guarding government buildings and installations and seeking to end clashes between the police and security forces.

Mr. Morsi declared emergency rule a month ago in Port Said and two other Suez Canal and Red Sea cities, Suez and Ismailia, and ordered the military to restore calm following protests in which security force killed more than 30 people in Port Said. Mr. Morsi’s decision was prompted by the inability of the interior ministry’s police and security forces, Egypt’s most reviled institutions because of their role as implementers of the repression of the regime of ousted president Hosni Mubarak, to restore law and order in Port Said.

In a repetition of events during the 18-day popular uprising in early 2011 that forced Mr. Mubarak to resign after 30 years in office, the military agreed to protect installations, including the crucial Suez Canal but refrained from cracking down on protesters who believe that their city has been made a scapegoat for failed government policy and has been historically marginalized. In fact, troops at times joined protesters defying the curfew in the city, prompting rumors that the military may seize power in a bid to restore a modicum of political stability.

The protests in Port Said as well as Cairo were sparked by an initial court sentencing to death on January 26 of 21 supporters of Port Said’s Al Masri sports club on charges of resposnibility for the death of the fans in last year’s brawl. The Cairo court is scheduled to pronounce judgement on March 9 in the case of another 52 defendants, who include nine mid-level security officials.

The court’s failure to pronounce judgement in its first round on the security officials fueled perceptions that police and security forces continue to be above the law. Opposition forces, soccer fans and protesters have long demanded that those responsible for the death of more than 800 people since demonstrations erupted in January 2011 against Mr. Mubarak be held accountable. A human rights report charged earlier this year that security forces continue to arbitrarily arrest and torture people.

Rival militant, highly politicized, street-battle hardened soccer fans in Port Said and Cairo agree that last year’s deadly brawl in which 74 supporters of crowned Cairo club Al Ahli SC died at the end of a match against Al Masri was not spontaneous. Both groups as well as a broad swath of public opinion are convinced that the brawl was an effort that got out of hand to cut down to size the militants who had played a key role in the protests that toppled Mr. Mubarak and subsequent opposition to the military that led Egypt to last year’s election that brought Mr. Morsi to office.

Al Ahli supporters welcomed the sentencing of the Al Masri fans but demanded that those responsible for the brawl in the military and the security forces, including the former head of the Supreme Council of the Armed Forces (SCAF), General Mohamed Hussein Tantawi, also be held accountable. Soccer fan protests in Port Said against the verdict struck a deep chord in a city of 750,000 that has long felt that it has been marganilized despite its role as a frontier town in the decades of conflict with Israel and its contribution to the Egyptian economy.

Port Said residents last month in response to a call by the Green Eagles, the militant Al Masri fan group, attempted to make notarized statements at government offices demanding that confidence in the Morsi government be withdrawn. Officials refused to notarize the statements.

The strikes and protests in Port Said located at the tip of the strategic Suez Canal have rattled the Morsi government and are inspiring its opponents to adopt the city’s civil disobedience tactics. In doing so, they threaten to empower opposition forces that have been struggling to channel public anger at Mr. Morsi’s haughty style of government and his rushing through of a controversial constitution. Opposition forces have already said they would boycot parliamentary elections scheduled for April.