Politics and Egypt: In the name of God 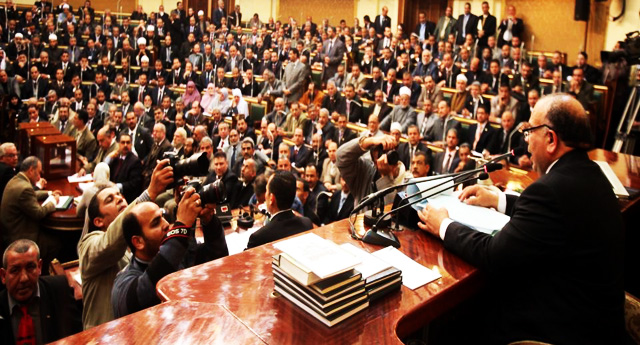 The future of Egypt is on the brink of an Islamist abyss. The Freedom and Justice Party’s tattered poker-faced mask has finally fallen, revealing the bloody fangs of a power hungry vampire, intent on destroying anything that stands between it and its evil, Quran-wielding project to turn Egypt into medieval Afghanistan.

Once again the Egyptian political street is polarized over issues that, on the surface appear to be different from earlier standoffs, but upon closer inspection are merely new facets of the same ongoing tug-of-war whose seeds were sown in the heart of the “glorious” 18-day uprising.

The fact is, the FJP is no vampire, and its naysayers are no haloed angels. What is happening in Egypt at the moment is also no surprise. The hair-tearing, red-faced “liberals” who didn’t see it coming are clearly unversed in the vicissitudes of revolutions. Naturally the Islamists were going to fill the void created by the fall of the regime, and just as naturally, the ruling military council was going to try to manipulate the transitional period to serve its interests.

The standoff between Islamists and non-Islamists over the formation of the Constituent Assembly, as well as the contrived crisis between the FJP and SCAF over the issuing of a no-confidence vote against cabinet, are mere manifestations of a head-butting match between the two over Egypt’s next president. What else would explain the FJP’s U-turn on their initial announcement not to field a presidential candidate?

What is happening today is an extension of an earlier debate over the supra-constitutional principals through which the military tried to impose its guardianship over the so-called “civil nature” of the state as a pretext to shield its economic activity from public oversight and protect its leaders from criminal accountability. In that SCAF was supported by “extreme liberals” who, as is the case now, would rather keep SCAF at the helm than see Islamists in power, and are today calling for SCAF intervention to defuse the crisis.

The FJP has been weighing its options from day one, planning diligently on how to navigate potential pitfalls, working double time to impose a reality on the ground, through legitimate means, through the ballot box, to give the party the leverage it seeks, not only with SCAF, but sadly also with Egypt’s moderate liberals.

Therein lay the seeds of the FJP’s guaranteed future undoing.

A conflict with a wide spectrum of non-Islamists, including liberals, triggered by the controversial formation of the Constituent Assembly, in which Islamists, led by the FJP and the Salafi Al-Nour Party, control almost 60 percent of the 100-member panel, was a golden opportunity for Islamist forces to prove that to which they’ve been paying lip service for over a year. Consensus-building is not impossible if there is genuine will; but neither is the decision to dominate the political space, and the numbers prove it.

Of the 50 panel members allotted to sitting MPs, 25 are FJP, while 11 belong to Al-Nour. The remaining 14 are a motley crew of independents and FJP allies, whose existence on the assembly carries some weight, but clearly not enough weight to influence the balance of power.

Over 25 of the 50 members elected from outside parliament are also Islamists, meaning that only 40 percent of “others” are represented in the body tasked with writing the constitution. To compound the problem, over 20 percent of those 40 have walked out in objection, not to mention a boycott of the assembly by the Egyptian Social Democratic Party, the Free Egyptians Party, Al-Wafd Party and even Al-Azhar, the Coptic Church and the Supreme Constitutional Panel. All have rejected much more than the Islamist hegemony; they criticized the lack of sufficient criteria regulating the representation of a diverse Egyptian society whether ethnically, religiously, professionally, socially or gender-wise.

While Coptic representation was at six members, reflecting a calculated adherence to the lowest estimate of Egypt’s Christian population (generally put at between six and 10 percent), the representation of women is even more of a disgrace, also sealed at six who mysteriously fail to include some of the most outspoken social and political female actors such as Justices Noha El-Zeini and Tahani El-Gibali, any recognizable women’s rights advocates or even one of a handful of political players like Gamila Ismail.

To build consensus over the constitution, the Islamists must give up at least ten of their seats on the panel to the benefit of non-Islamists, and sectors that were not even represented in the first place, like the Nubians, for instance. While a such a solution may have been reached, according to news reports on Thursday, the effectiveness of it is still questionable, considering the fact that those replacing the Islamists are restricted to an already elected list of substitute members. So fundamentally not much has changed. Besides, replacing only 10 members is simply not enough and does not guarantee to fill the gaping hole of unrepresentated or under-represented sectors of society.

Talk of the illegitimacy of a “dictatorship of the minority” (who indeed have a knack for shooting themselves in the foot) by some FJP members is all well and good, as long as the “majority” on its part stops speaking in the name of God. This was never a fair fight from the start (partly because there is no coherent viable alternative) and even though the Islamists have toiled for decades to reach where they are today, they have a moral obligation to ensure that all Egyptians are involved and empowered in this crucial milestone in our history. It would be a grave mistake to seek a total monopoly on all the reins of power today because the sure failure that will ensue will fall squarely on their shoulders as well.

My advice to the FJP: drop the presidency, back-peddle on the Constituent Assembly and remember that SCAF is your enemy, so don’t lose your friends for a pact with the devil.

2 Responses to Politics and Egypt: In the name of God