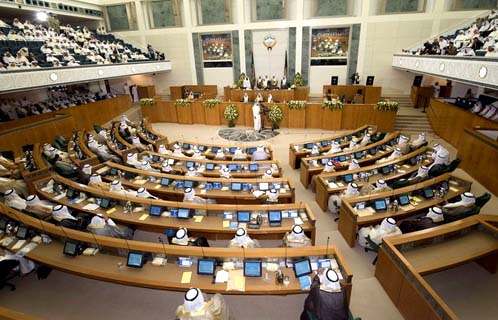 Kuwait’s Parliament is undergoing another crisis. The Deputy Prime Minister, Sheikh Ahmed Al Fahad Al Sabah, resigned in June rather than face an interpolation by disgruntled Members of Parliament (MPs). Though these interpolations are supposed to be a standard Parliamentary questioning tactic, in Kuwait they are described as ‘grillings’. They are usually highly accusatory, hostile and an ordeal that can last for hours on end. A grilling can be brought by any MP over any topic, though a quorum is needed to follow the grilling with a motion of no confidence. In the past MPs have used and abused interpolations to pursue their own partisan and disruptive agenda.

It is only since 2006 that it has been possible for the Prime Minister (PM) himself to be subject to a grilling. Previously, the Crown Prince was also the Prime Minister. But from 2003 to 2006, Sabah Al Sabah officially took over the title of PM from the ailing Crown Prince, Saad Al Sabah. This broke with tradition and the PM was now no longer also directly in line to the throne. The possibility of interpolating the PM thus emerged, though Sabah Al Sabah never faced this problem as it was clear that he would soon be Emir. His PM, Nasser Al Sabah and his governments, however, have had repeated problems.

Nasser’s first government was dissolved by the Emir when it was barely four months old after reformist MPs, in an unprecedented move, sought to grill the PM over issues regarding changes to electoral districts. In the new government there were, as always, a handful of changes in personnel, but the MPs had a solid majority and forced through the district changes that the Government and the Emir sought to block. Any notion of opposition unity after this success soon evaporated ‘leading to a situation in which highly factionalized parliamentarians use their tools with abandon in pursuit of no coherent agenda.’ [1]

Since then, the PM has faced another eight grilling requests by MPs and has formed seven cabinets in five years. In 2009 the Minister of the Interior became the first Royal Minister to face an interpolation and a subsequent vote of confidence as opposed to simply resigning beforehand. He passed and this ushered in a brief era of reconciliation. The PM followed suit in December 2009 and was grilled along with four other cabinet members in a twenty hour marathon session finishing at 5:30 in the morning. A motion of non-cooperation with the PM was soundly defeated with only thirteen of fifty MPs in support.

More recently, at the start of 2011 the PM faced another nine hour grilling and a subsequent motion of no confidence. Though he again passed, he did so only by a narrow and unconvincing three votes.  Similarly, in June he passed though twenty four members of the fifty member Parliament either abstained or voted to oust him: hardly a resounding vote of confidence.

What exactly are the key issues which so frequently flare-up and cause such anguish in the Parliament?

An abiding concern of the Parliament is corruption. Given the billions upon billions of dollars swilling around Kuwait, MPs are in a perennial state of fear that the elite is creaming off millions of dollars that rightly belong to the Kuwaiti people. As with every country on earth, they have some justification for these fears. Examples range from classic ‘company fraud’, such as the long ago but not forgotten Kuwait Oil Tankers Company saga to examples involving individual MPs or even the Prime Minister himself. In the latter example, an MP paraded one of the PM’s personal cheques around Parliament which was, he claimed, a clear example of the PM trying to bribe a fellow MP. The PM wholly denied the charge.

Linked with the fear of corruption is a fear of privatisation. Numerous MPs see the privatisation of Kuwait’s industries as the legalised theft of Kuwait and bitterly oppose such laws when they come to Parliament. They cite fears that either Kuwait’s elite or foreign speculators will come in, take over and make huge profits while the price will rise for the services that they charge. To some degree, these fears are well founded. Profits can be made if an industry is well run and when heavy subsidies are taken away prices can go up as the market adjusts to the real price of the service. It was only under the temporary hiatus of tensions in mid-2010 that a privatization bill and other desperately needed economic stimulus packages (some eighteen years in the making) finally made it through Parliament.

Kuwait typically operates under the unwritten understanding that power in the form of the Emir would alternate between the Jabr and the Salim branches of the Al Sabah family. However, this cycle has been broken recently. Not only did Sultan Al Sabah – from the Salim side – only reign for nine days due to severe illness, but the current Emir, Sabah al Sabah – from the Jabr side – installed his half-brother Nawaf Al Sabah as Crown Prince and his nephew Nasser Al Sabah as the Prime Minister. The Salim side have thus been significantly emasculated from power and this dynamic is believed to be contributing to the rancour and acrimony in the Parliament.

More generally, many MPs seem to be persistently aggrieved by the lack of changes in the makeup of the Cabinet. As has been noted, the current PM has formed seven Cabinets. Rarely do more than two or three Ministers change from one to the next. Moreover, the key posts of Defence, Interior and Foreign Affairs are always held in Al Sabah hands.

The institutional and nigh-on perennial issues that have plagued Kuwait’s Parliament in recent decades have been further complicated and embittered by the recent surge in Sunni-Shia tensions in the Gulf. Saudi Arabia, ably and willingly abetted by Abu Dhabi and Bahrain, has deliberately foisted a sectarian lens onto the troubles in Bahrain. This has been done not only so that the states in question do not have to consider whether the Shia in Bahrain have legitimate grievances but because this suits their geopolitical world-view and fits their prejudices. Indeed, despite persistent accusations that Iran is ‘behind’ events in Bahrain there has been a stunning lack of evidence presented.

In contrast, specifically in Kuwait there is in fact evidence of Iranian involvement. A spy ring was discovered operating in the country and those involved were sentenced in May this year for passing on sensitive information to the Iranian Revolutionary Guard. This news stirred Kuwait’s Salafi MPs and the Iranian Ambassador in Kuwait was expelled.

Subsequently they protested loudly and demanded to grill the PM over the fact that Kuwait did not contribute troops to the Gulf Cooperative Council (GCC) military support of Bahrain. Also, in the face of what they see as blatant Iranian aggression, the PM hosted Iran’s Foreign Minister and agreed to the return of the Iranian Ambassador – all in a bid to dampen tensions. This further irritated the Salafis. Indeed, they accuse the PM, who speaks Farsi and is a former Ambassador in Tehran, of weakening Kuwait’s national security by taking these calming actions. A group of MPs sought and failed to force him to resign in June over these matters. Within minutes of their failure, they had again tabled another motion to grill the PM.

Nevertheless, while he is ever more the focus of these tensions, they are not confined to the PM. Indeed, a serious fist-fight broke out in Kuwait’s Parliament in May between Shia and Sunni MPs under the gaze of a group of American lawyers invited to watch proceedings.

Sectarian relations in Kuwait are, therefore, at a low ebb. The Prime Minister is wholly caught up in this conflict and has countless other detractors; he is the lightening-rod for all criticism from large sections of MPs and the public alike. Indeed, at least two youth groups Al Soor Al Khamis (the fifth wall) and Kafi (enough) have emerged recently, that have protested for the ousting of the Prime Minister.

The way forward for Kuwait is not at all clear.

It seems inconceivable that the Prime Minister could ever marshal an effective and compliant Parliament; his bitter history as the focus of the opposition’s ire, now compounded by his involvement in sectarian issues, makes him profoundly estranged. Even if this Parliament can stumble to its four month-long recess, the chances of everyone ‘forgiving and forgetting’ when the new term starts are slim to nil, even if the worst of the sectarian tensions are over.

Twice before has the Kuwaiti Emir unconstitutionally dissolved Parliament (i.e. dissolved it but did not reinstate it within the stipulated time frame). Sabah Al Sabah has insisted that he will not do this, even though he would be able to pass numerous important laws and packages that are currently jammed in the Parliament. Were he to do so, while some may feel that this would be a reasonable response to Parliament’s unedifying and damaging behaviour of late, in an era of Revolutionary fervour, there would soon be immense pressure on him to re-instigate the Parliament. Choosing another PM would be seen as a sign of weakness and would by no means guarantee a more pliant Parliament, yet, for lack of other options, it is one of the few tenable alternatives available.