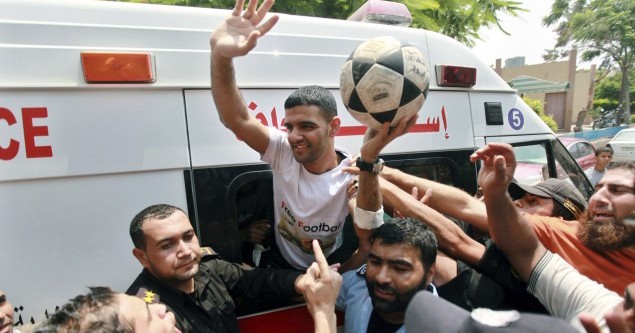 Mahmoud al-Sarsak’s promising soccer career in the Palestinian national team was interrupted when he was detained at an Israeli military checkpoint three years ago and held indefinitely as an unlawful combatant without ever being charged or knowing the precise reasons for his incarceration.

Mr. Al-Sarsak was released in July after a 92-day hunger strike under pressure from world soccer body FIFA and Europe’s governing football group, UEFA. Israeli officials said he was suspected of being a member of the militant Gaza-based Palestinian group, Islamic Jihad, an allegation he denies.

Mr. Al-Sarsak rejected an invitation earlier this month to watch the Spanish derby between FC Barcelona and Real Madrid in Barcelona’s Camp Nuo stadium because he did not want to be in the same venue with Gilad Shalit, an Israeli soldier, who was held for five years by Hamas, the Islamist group that rules the Gaza Strip. Mr. Shalit was released last year in a prisoner exchange with Israel.

In an interview with Extra Time, the weekly international soccer supplement of Italy’s La Gazzetta deelo Sport, Mr. Al-Sarsak said that he had suffered physical and psychological torture – allegations Israel has denied.

In a statement after visiting Mr. Al-Sarsak during his hunger strike in prison, the Israeli branch of Physicians for Human Rights said that “despite the urgency of his condition, the Israeli Prison Service (IPS) has denied Mahmoud access to independent doctors from PHR-Israel until today. (…) Mahmoud has experienced extreme loss of muscle tissue and drastic weight loss. He has lost 33 percent of his body weight (…) He also suffers from frequent incidents of fainting and loss of consciousness (…) The doctor further reported that Mahmoud is in danger of pulse disruptions (arrhythmias) that are endangering his life”.

One of 12 brothers, Mr. Al-Sarsak grew up in a refugee camp in Gaza where he started playing soccer at an early age.” I am a striker and, yes, I’m good. When I was 14, I was called in the national team for a tournament in Teheran, where I scored six goals,” he says.

When were you arrested?

“On Wednesday, July 22th, 2009. I was travelling to sign a contract for a Nablus team. I had a permission from the Israeli authorities to go from the Gaza Strip to the West Bank. I arrived at the check-point, the soldiers searched me and then said that there was an arrest warrant against me, but they never showed it to me”.

Did you put up resistance?

“I didn’t. They stripped me naked, then they tied me hand and foot. I was blindfolded and put on a car. It probably lasted for three hours, during which they beat me up with sticks and their rifle butts. Then they drove me to the Ashkelon interrogation centre”.

Were you assisted by a lawyer?

“I was allowed to contact one only after 36 days”.

Were you beaten in Ashkelon?

“They wanted to avoid any fracture, thus they hit me on my feet, on my bottom, where they knew they wouldn’t leave any trace. But the psychological pressure was stronger. For the first 18 days, they didn’t let me sleep more than one hour or two per night. The other 18 I managed to sleep for four hours. They often tied me to a chair, or to a wall with my hands up”.

What were you accused of?

“Of nothing. They wanted to know whether I was affiliated to any political organisations”.

According to an Israeli government spokesperson, you belonged to the “Islamic Jihad” group.

That’s false. I have never been enrolled in any movements. In any case, I was questioned about any kind of formations, the religious as well as the secular ones”.

Had you participated in any violent actions before your arrest?

Never, nor had I taken part in political manifestations. Look: I played football, I worked with my father and I was in my third year at university. I had no girlfriend, let’s say I was looking for one.

After the days in Ashkelon?

I was deported to a jail in the Negev desert. They said I was an unlawful fighter and that I had to spend six months in prison. Six months later, the same story. And so six months after six months, for seven times”.

How was life in the Negev jail?

We slept in 20-people tents. The day was extremely hot, the night was deadly cold. Privacy was non-existent: the toilets and the showers were in common containers. I spent one year and half there.  No way we could play football, at best we could play chess. Every six months the Red Cross came to visit us”.

Were you physically attacked?

“They didn’t touch me, yet the psychological violence was present. I wasn’t allowed to communicate with my family, not even by phone. During my detention, I had the right to a letter per month. You can fancy my parents’ worry, as well as what I felt when I imagined their anguish”.

When did you decide to start your hunger strike?

“When, for the seventh time, they extended my detention without any explanations. I did feel the injustice and took the decision. As soon as I refused to eat, they locked me up in solitary confinement. They put a huge pressure on me in order to stop my fasting. They provoked me, by bringing food in my cell. They led me to a hospital where some patients were undergoing dialysis and said that my kidneys would know the same fate. Sometimes they threatened to put a tube in my mouth to make me gulp down some milk”.

Was it a total strike?

“I drank water and took some minerals, but no sugars. At the end of the fast, I weighed 46 kg, from the 76 of March. I often fainted, I was exhausted. I didn’t manage to sleep, sometimes my vision was blurred. For three days I was completely blind. After 30 days I didn’t manage to stand up. But most of all, I remember the huge sadness of those months”.

No. I was assisted by a medical official, who put pressure in order to convince me to desist. I’ve always stayed isolated, I knew nothing about the solidarity outside the jail. I managed just to catch a glimpse of some other prisoners when I was transferred on a wheel-chair to meet the doctor”.

How did the negotiations proceed?

“It lasted for 40 days. Once they proposed me to go to France, Denmark or Norway to have treatment and then to release me in Gaza. But to me it was a threat: I didn’t want to get even farther from my family”.

How do you explain your release?

“They wanted to avoid any embarrassment: they had no credible charge, if I had died it would have been even more resounding. And then I believe that God’s will was fulfilled”.

For what reason do you think you were arrested?

“I don’t know. I can just think that I was ambitious and may be they didn’t want a Palestinian footballer to become famous”.

The day of your release?

They drove me to Gaza in an ambulance. I saw my folks again, a joy I couldn’t describe. And then I felt victorious. I got out of there, I broke that nightmare. I won. Yet, I can’t help thinking of the many that are still in those jails. I am troubled and I feel sadness, anxiety for them. Because I am like them.

We asked the Israeli Embassy in Rome a reply to Mr. Sarsak’s interview. Here we publish their whole answer:

“Mahmoud al-Sarsak was arrested while trying to illegally enter the Israeli territory. He is not just a football player, but also a member of the “Islamic Jihad”, a group included in the terror list by the United States, Australia, Canada, Japan and the European Union. As a further proof of this, we must remember that, after his liberation, Mahmoud al-Sarsak was described by Nafez Azzam – leader of the “Islamic Jihad” – as “one of the noble members” of the terroristic organisation, what is tantamount to the umpteenth proof of the charges that Israel moved against him.

After his arrest, Israel applied to Mahmoud al-Sarsak the rules of the so-called ‘administrative detention,’, an internationally acknowledged individual freedom-limiting measure. Such a measure is provided also by the Codes of Countries like the Great Britain, Australia and the United States. Throughout his detention, included the period during which Mahmoud al-Sarsak declared the hunger strike, he enjoyed a full acknowledgment of all of the due rights: he had the possibility to choose a lawyer, to meet him freely and he received the visits of the International Red Cross. In this sense, any mistreatment accusation has to be intended as simply false and propagandistic”.