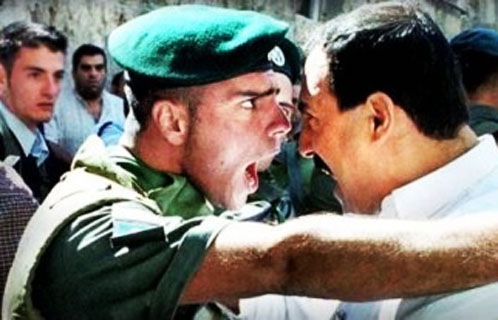 The Qatar satellite channel Aljazeera has gotten hold of some 1600 documents from the Palestine Authority regarding negotiations with Israel, which cast the Israelis, the Americans and the Fatah faction of Palestinians in the worst possible light. The leaked documents were shared exclusively with The Guardian newspaper.

The documents could well destroy the Palestine Liberation Organization, a coalition of parties that includes Fatah, which is led by Palestine Authority President Mahmoud Abbas. Among the politicians who comes off the worst in these documents is Saeb Erekat. The Palestinian Authority is revealed as feeble as a kitten. Like a a spurned suitor, Erekat kept offering the Israelis more and more, and they kept rejecting his overtures.

“Israel takes more land [so] that the Palestinian state will be impossible . . . the Israel policy is to take more and more land day after day and that at the end of the day we’ll say that is impossible, we already have the land and we cannot create the state”. She conceded that it had been “the policy of the government for a really long time”.

Although she said that in 2007 the Olmert government was not following this policy, she admitted some parties were. And, of course, in February 2009, parties came to power that would not so much as give Palestinians a glass of water.

Saeb Erekat,an old-time Fatah operative, is in trouble because he is revealed to have offered the Israelis much of East Jerusalem. He is also said to have been convinced by the Israelis that the future Palestinian state would not have an army, air force or navy (i.e. it would lack sovereignty over its own territory and would only be an ersatz state). Even then, the Israelis kept demanding more and more.

Erekat’s enemies, the Hamas movement based mainly in Gaza, are using the revelations to paint him as a traitor to the Palestinian and indeed the Muslim cause. I saw him on Aljazeera, where he was very defensive. London-based journalist Abdel Bari Atwan let him have it with both barrels.

Erekat and other Fatah leaders are accusing Aljazeera of forging the documents and of attempting to scuttle the Palestine Authorities’ plan to go to the United Nations to get an international resolution against ever-expanding Israeli colonies.

But even PA loyalists like attorney Diana Buttu have called for Erekat’s resignation in the wake of the revelations.

The Fatah-dominated Palestine Authority has long been regarded as corrupt and authoritarian by many Palestinians, not to mention wusses when it came to dealing with Israel. These documents demonstrate that its leaders were willing to give away just about anything to have a state they could preside over, even something that was only a state in name.

I’m not sure that Fatah can survive being discredited to this extent. Nor, likely, can the American farce of a ‘peace process’ or a ‘two-state solution.’ (The state Erekat was trying to get would have no sovereignty, as he admitted, which means it would not be a state and the entire end goal is a chimera).

As for the Americans, Condi Rice is said to have told the Palestinians (with regard to their mass expulsion in 1948 and their loss of statehood) that lots of peoples have had bad things happen to them. But ‘lots of peoples’ don’t have nearly 5 million stateless people currently. Stateless people have no real rights. They are not citizens. The Nazis prepared for their move against the Jews by first stripping them of German citizenship. That gave denaturalizing people a bad name.

There are only a few million stateless people in the world now, and the biggest group of them is the Palestinians. (No, illegal aliens and frustrated sub-nationalists are not like the stateless. The illegals have a state, to which they are sometimes deported. The sub-nationalists may not like the citizenship they hold, but they do have passports, property rights that a judge will back up, etc. Palestinians in the Occupied Territories and Lebanon, plus about 130,000 in Jordan, have bupkus).