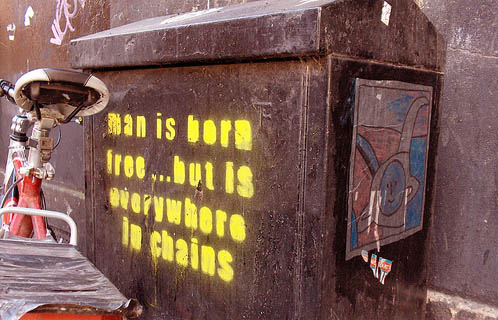 The logic of ‘the Arab Spring’ is about popular sovereignty. The people power being displayed in the streets, on twitter and Facebook, is intended to sweep away impediments to the expression of the will of the people, mainly presidents for life.

The Arab crowds are investing their hopes in a new era of parliamentarism, in elections and constitutions, in term limits and referendums, in the rule of law and the principle that governmental authority must derive from the people. It is not that they are John Stuart Mill liberals. The crowds have a communitarian aspect, and the demand for jobs, for free formation of labor unions and the right to bargain collectively form a key part of the protest movements. But such labor organizing is also seen by movement participants as part of the expression of the popular will.

That the movements have been so powerfully informed by this Rousseauan impulse helps explain their key demands and why they keep spreading. The progression is that they begin with a demand that the strong man step down. If they get that, they want a dissolution of old corrupt ruling parties and elites. They want parliamentary elections. They want term limits for the president and reduction of presidential powers. They want new constitutions, newly hammered out, and subject to national referendums. They want an end to corruption and croneyism. They aim for future governments to be rooted in the national will.

In Yemen, strongman Ali Abdullah Salih’s offer to step down at the end of this year,was met with demands that he do so immediately, as some of his officials resigned. Salih’s troops shot down dozens of demonstrators in downtown Sanaa last Friday, provoking many defections from his government this past weekend, including among high military officers.

The demands have spread to Deraa, southern Syria. Syria is ruled by a one-party system, the Baath Party, and the reins of power had been passed dynastically from dictator Hafez al-Asad to his son Bashar. Aljazeera English has commentary on the situation.

In Morocco, King Mohammed VI has promised to allow the prime minister to be elected by parliament rather than appointed by himself. He also pledged that the PM would have more prerogatives and that there would be a separation of powers. Thousands came into the streets of Casablanca on Sunday to put pressure on the king to follow through on his pledges. But the crowds added another demand, of a new constitution to be approved by the people.

In Libya, people were trying to hold out in Zintan as pro-regime forces bombarded the city. Likewise, Qaddafi’s military subjected the large city of Misrata to intensive bombardment.

In Algeria, President Abdel Aziz Boutefliqa and the generals that back him have been forced to lift a state of emergency that had curtailed constitutional rights, and the president is promising as yet unspecified “reforms.”

Michael Hudson surveys the wreckage in Bahrain, where the Shiite majority had demanded constitutional reforms in aid of popular sovereignty from the Sunni monarchy, but got imported Saudi Wahhabi troops instead.

The Bahrain monarchy’s rigid refusal to compromise has turned the reform movement into a sectarian issue. Thus, the Bahrain Shiites are attracting support from Lebanon’s Hizbullah (which represents that country’s Shiites) and from Iraq’s Shiites. Bahrain airlines has been forced to cease flying to Beirut because of threats. Arab Shiism has often been denied political expression on the basis of its weight in the electorate, since the majority Sunni societies view that branch of Islam as a heresy, and link it to Shiite-majority Iran.