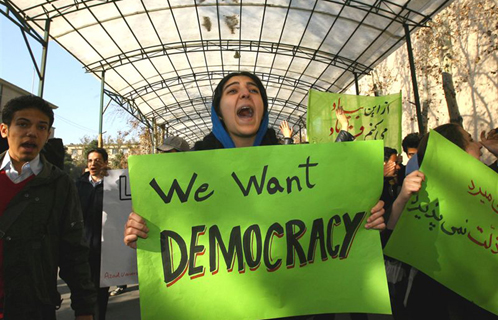 Over the past few years, we have often heard about a new Middle East, as envisioned by the United States and its allies. What is happening in the Arab world now, however, is a new Arab spirit generated by Arabs themselves. This positive change first started in Tunisia, but we don’t know yet how far it will spread.

Despite the fact that the new Arab spirit is as of yet undefined, and that Bahrain, Libya, Syria and Yemen are witnessing high levels of violence, change is happening. One can see changes in economies and policies, as well as in the responses of Arab government to the demands of their citizens, clearing the way for effective democracies in countries where revolts have been successful.

This new spirit is founded on the idea of self-sacrifice for others. It began after one Tunisian citizen, Muhammad Bouazizi, set himself on fire. His act became a symbol of the need for revolution, and it continues to be a rallying cry for thousands of other citizens, taking to the streets daily throughout several Arab countries to raise their voices for change. They are well aware of the dangers, but they still risk being arrested or even shot, because they believe that through their sacrifice their fellow citizens will be able to gain dignity and freedom.

Among the most prominent features of the new Arab spirit is respect. Those who participated in the Egyptian revolution cleaned up the litter left in Tahrir Square after protests, showing respect for their environment. And then there’s respect that extends to concern for others, which was evident when Christian Egyptians locked arms and built a human wall between Muslims worshippers and any would-be attackers during a protest. And prior to the revolution, Muslims defended a Christian church and its occupants from potential attacks, demonstrating the same spirit.

In Libya and Yemen’s revolutions, tribal leaders have set aside their weapons out of respect for the peaceful nature of the revolutions they are participating in. In these countries, men normally wear a weapon – such as a rifle or small sword – as a symbol of their masculinity. But in recent demonstrations they have been leaving their weapon behind as a way to show peace and respect for fellow demonstrators.

The most prominent features of the new spirit in the Arab world, however, are the changes that are taking place on a government level, especially regarding laws and constitutions.

In Egypt, for example, an interim constitution has been written. It consists of 62 articles, including eight articles of the 1971 constitution that were amended as a result of the 19 March public referendum. One article reduced the presidential term from six to four years. In Tunisia, the people will elect an assembly on 24 July to reform their constitution. And in a historic speech the Moroccan King Mohammed VI said he would give up his right to appoint the prime minister, who would instead be chosen by parliament.

Economic and social changes also show the shift that is happening in the Arab world. To avoid demonstrations in some countries, authorities have started to try to improve the lives of their citizens.

In Saudi Arabia, for instance, the wages of all government officials were increased and a minimum wage was established – at $800 per month – when previously there was none. Saudi Arabia, like other countries that have made similar efforts, is trying to avoid upsetting the status quo through such changes. However, despite being positive, these changes should be more drastic and allow for a shift toward a democratic political system.

Ultimately, this new spirit in the Arab world has shown global society’s recognition of, and belief in, the current young generation and its leadership of the revolution. This recognition comes after they have long been marginalised, and perceived as being primarily concerned with more self-serving endeavours, such as their love lives and spending time on the internet. In fact, countries that have been in the midst of these revolutions now refer to those events as the “Youth Revolutions”.

There is a new wind in the Arab world. Democracy is on its way.