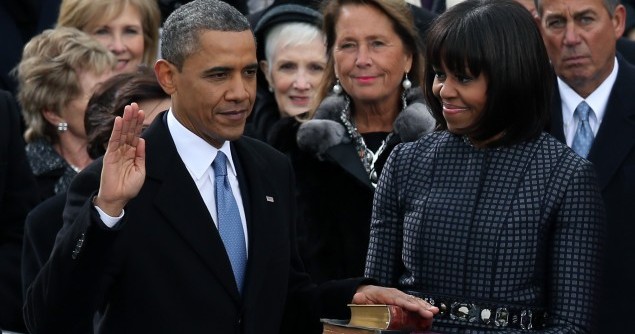 President Obama addressed the big issues of war and peace in his inaugural address, and despite the vagueness of some of his pronouncements, they contain strong clues to his foreign policy agenda in the Middle East. His announced policy will be one of ending US military engagements abroad, multilateral cooperation with allies to face security challenges, negotiation, and avoidance of further military entanglements in the Middle East. In other words, Syrians are on their own, France can have Mali, and Iran is probably not going to be bombed.

Unfortunately, Obama’s stated vision and commitments are open to revision by reality. George W. Bush campaigned in 2000 against nation-building exercises, then took on two countries’ worth of them. Obama’s extreme sanctions against Iran, which are already denying children needed medicine and consist of a kind of blockade (a legitimate casus belli in international law), could well blow up in his face in ways he does not now anticipate.

He said on Monday:

“This generation of Americans has been tested by crises that steeled our resolve and proved our resilience. A decade of war is now ending. An economic recovery has begun. America’s possibilities are limitless. . .

We, the people, still believe that enduring security and lasting peace do not require perpetual war. . . we are also heirs to those who won the peace and not just the war, who turned sworn enemies into the surest of friends, and we must carry those lessons into this time as well.

We will defend our people and uphold our values through strength of arms and rule of law. We will show the courage to try and resolve our differences with other nations peacefully – not because we are naïve about the dangers we face, but because engagement can more durably lift suspicion and fear . . . We will support democracy from Asia to Africa; from the Americas to the Middle East, because our interests and our conscience compel us to act on behalf of those who long for freedom.”

Obama has already fast-tracked the end of active US war-fighting in Afghanistan to this spring, and for the next 18 months or so the main activities of US forces in that country will be training troops of the Afghanistan National Army and providing them logistical help and back up in their own fights with insurgents.

What this decision of Obama means is that as of some point this spring, the US will no longer be at war for the first time since September, 2001 (though some fighting may occur in support of Afghan units). And within two years, the US will be largely out of Afghanistan. It is possible and perhaps likely that the US subsidiary drone war in the north of Pakistan will be mothballed as full sovereignty returns to Afghanistan (I certainly hope so).

By his slamming of “perpetual war” (a conception typical of some of the Neoconservatives and former VP Dick Cheney), Obama is anticipating an era of peace and prosperity.

So we may conclude that he has no intention of bombing the Iranian nuclear enrichment research facilities at Natanz near Isfahan in Iran.

Some people will be disappointed at Obama’s diction here. Israeli Prime Minister Binyamin Netanyahu has been jumping up and down until he is blue in the face demanding a US attack on Iran and threatening to do it himself if Washington won’t. I have all along maintained that Netanyahu lacks the capacity to attack Iran, and that the Department of Defense does not want him cowboying that way in the sensitive Persian Gulf. The Department of Defense is aware that the thousands of US personnel at the US embassy in Baghdad (can you say, huge enormous Benghazi?) are vulnerable to attacks by the Mahdi Army if Israel bombs Iran, as are US facilities in the Gulf such as the al-Udeid Air Base in Qatar and the US naval base in Manama, Bahrain. That is, there is no such thing as a unilateral Israeli military action against Tehran. Any such strike would immediately cause attacks on US facilities in the region and bring the US into the war. Therefore, the DoD and the top brass have repeatedly told Netanyahu not to dare act out.

All the Israeli leadership had been left with was wishful thinking, as with President Shimon Peres’s recent expression of confidence that if all else fails (i.e. if Iran cannot be deterred from its enrichment activities), he is sure that Obama will attack Natanz.

Likewise, the American right wing, whether militarists such as Sen Lindsey Graham or the Neoconservatives in Congress (e.g. Michelle Bachmann, Eric Cantor), are spoiling for a fight with Iran. The arms manufacturers and the thousands of subcontractors to the Pentagon are facing penury in the absence of a new war, unless they find other things to do. (I’ll bet you they can make less expensive, more efficient solar panels if they try.) With the planned reductions in the war budget, which could be quite steep, the US may finally get the ‘peace dividend’ it was promised but never could collect when the Soviet Union collapsed in 1991. Defense-related industries are very inefficient means of creating jobs, and almost anything else they turned their talents to would produce more jobs for less investment. There are going to be enormous demands for more efficient energy storage, inexpensive desalinization, and other tasks related to climate change, to which electronics firms could well make key contributions. They’ll just have to do that instead.

Obama had already signaled his determination not to be pushed into war by the Israel lobbies through his nomination of Chuck Hagel to be Secretary of Defense. The shameful and outrageous attacks on Hagel by lowlifes such as Elliot Abrams (who should be in jail for lying to Congress and involvement in Iran-Contra and Nicaragua) as an “anti-Semite” have crashed and burned, perhaps forever blunting this sleazy tactic deployed by Jewish nationalists against their critics.

Obama also spoke of reviving multi-lateral institutions for confronting joint security challenges. It is not clear what he meant by that– perhaps reforms to NATO?

There are three dark clouds over Obama’s vision of peace and prosperity.

The first is America’s drone wars in Pakistan, Yemen and Somalia. Any time you are dropping bombs on people, whether from an airplane or via a drone, you risk escalation to war. Yemen has too few developed resources to be at risk from an American occupation under ordinary circumstances. But there are things that radical Yemenis could do that would force Obama’s hands, not least an attack on the US embassy. If Obama really wants an era of peace and prosperity, he has to end the drone wars and hand security tasks off to allies.

The second danger is the Israeli Likud government’s final destruction of any two-state solution and permanent denial to millions of Palestinians of the rights of citizenship. Permanently stateless Palestinians will be an element of disorder that is unpredictable, and the near term and medium term actions of their supporters among governments and peoples are likewise impossible to guess at. But this final denial of hope to the Palestinians by Netanyahu is unlikely to pass without incident, and any incident is likely to draw in the US, willy-nilly.

The third danger, more consequential, is the unanticipated outbreak of hostilities with Iran. The financial blockade that the US Congress and the US Treasury Department has imposed on Iran has cut Iran’s petroleum exports by 40% in the past year. It probably does not threaten the stability of the government, and the ayatollahs will find ways of protecting themselves even as the subaltern social classes feel the real pain. But the unilateral interference with Iran’s legal commerce in petroleum, far beyond what UNSC resolutions foresaw, could provoke Tehran to do something stupid. The US financial and, in 1941, petroleum blockade of Japan provoked the Pearl Harbor attack (Japan wanted to break out toward the oil in the Dutch East Indies and resources in British Malaya, were afraid the US would try to stop them, and so wanted to neutralize the US fleet).

The rationale for the extreme US sanctions is that Iran is attempting to construct a nuclear warhead, which is not a proven proposition and against which there is a lot of evidence. Iran once again recently underlined the fatwa or religious ruling by chief theocrat Ali Khamenei that the construction, stockpiling and use of nuclear bombs is strictly forbidden in Islamic law.

Iran could well get desperate this year. An aide to Khamenei, the Iran supreme leader, has announced that the removal of Bashar al-Assad in Syria is an unacceptable “red line.” It would make it impossible for Iran to continue to stretch a security umbrella over Lebanon, protecting it via Hizbullah rockets from Israeli expansionism, since Iran’s land bridge to Beirut through Iraq and Syria would be cut off. An Iran without a pro-Tehran government in Damascus would be much diminished in the Middle East.

The survival of the Nouri al-Maliki government in Iraq in the medium term is also not assured, and if (admittedly this is unlikely) a Sunni Arab- Kurdish- Secular Shiite coalition could be forged, the pro-Iran Shiite religious parties could lose control of the Iraqi parliament in the 2014 elections. If Iran lost both Syria and Iraq, it would be effectively contained for the first time since 2003.

Saudi Arabia seems likely to win out over Iran in Bahrain, as well.

Add to all that Iran’s economic woes, imposed by the US Department of the Treasury and by Neocons and Tea-Partiers in the US congress, and the more adventurous elements of the Iranian military and para-military could be provoked to unwise action.

In short, Iran’s leaders may feel as though they are being drowned and about to be snuffed out by geopolitical reversals and American blockade. Obama has Iran in an imperfect stranglehold, the most dangerous possible posture. His theory may be that if Iran’s leaders feel sufficient pain, that will bring them to the negotiating table. If so, he needs to set talks in motion immediately. Allowing the current financial blockade to fester is an enormous risk.

Wanting an era of peace and prosperity and getting one are not the same thing, and everyone in Washington should remember the law of unintended consequences.