He’s Obama’s Man But Will AIPAC Take On Hagel? 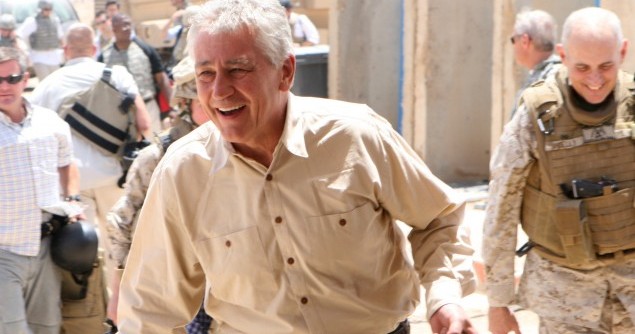 One of the most extraordinary dramas of the modern presidency, the Floating of Chuck Hagel, in which a fundamental question of the People versus A Special Interest was debated in the media thanks to White House leaks– with powerful zealots and editorial page writers and tweeters and bloggers and senators weighing in– is coming to its final act, with all signs that Obama is going to damn the torpedoes and nominate Hagel for Secretary of Defense.

“Next week the bullshit stops” on Hagel, says former Senator Max Cleland, who like Hagel was injured in Vietnam.

Neoconservative Ari Fleischer is angrily resigned to it:

When Obama names Hagel, I hope there’s a table in the room so we can see if there is anything on it.

Jackson Diehl of the Washington Post says the appointment is a move to the left:

“Oddly, the nomination of Republican Chuck Hagel will be the strongest indication yet that Obama is moving to the left in his second term”

Glenn Greenwald in the Guardian agrees, calling the likely appointment one of the boldest moves of the Obama presidency. And he urges liberals to join realists to smash the Israel lobby:

“… at the very least, Hagel’s confirmation will be a much-needed declaration that some mild dissent on foreign policy orthodoxies and Israel is permitted. It will shatter AIPAC’s veto power and dilute the perception of the so-called “pro-Israel community’s” unchallengeable power. It will ensure that there is at least some diversity of viewpoints when it comes to debating endless war, belligerence v. negotiations, and MidEast policy. It will highlight the typically-suppressed differences within the GOP and the country about America’s war posture. In sum, as Matt Duss very persuasively detailed in the American Prospect, Hagel’s confirmation would bring some incremental though potentially substantial benefits.

Given the steadfast and usually unquestioning support most liberals have given this Democratic President as he’s pursued policies of aggression and militarism, they should refrain from opposing one of the few prominent dissidents on these matters absent some very compelling reasons. So far, nothing remotely compelling has been offered. If this nomination actually happens, this will be one of Obama’s best appointments and boldest steps of his presidency. It would be ironic indeed, and more than a bit unfortunate, if liberals decide to make this nomination one of the very few times they are willing to oppose their party’s leader.”

But the RJC is made up of neoconservative zealots, aligned with Bill Kristol and the Emergency Committee for Israel and Josh Block of the Israel Project, formerly of AIPAC. They can’t mount an attack on Hagel without the big Jewish organizations, AIPAC and the ADL and the Conference of Presidents. Jim Lobe doesn’t think that battle is going to happen. He says that AIPAC will read the writing on the wall– Senate confirmation of a decorated war hero (Steve Walt’s describes Hagel as such in talking to Lobe)– and understand that it could lose considerable political capital if it takes the battle on.

If it [AIPAC] mounts a vigorous campaign to fight Hagel’s confirmation by the Senate, it could put at serious risk its relations with the president, who is about to be inaugurated for another four-year term.

Worse, if it loses such a campaign, the aura of near-invincibility that it has assiduously cultivated over the past 30 years – and which has translated into virtually unanimous votes on resolutions in both houses of Congress in support of Israeli policies from the Occupied West Bank to Iran – will suffer a serious blow.

Yet, if it acquiesces in Hagel’s confirmation, it will result in the placement in a critical foreign policy post of a man who prides himself on his independence.

Hagel has expressed strong scepticism about – if not opposition to – war with Iran, and, despite a record of strong support for Israel’s defence needs, has not hesitated to publicly criticise both the Israeli government and its supporters here for pursuing actions that have, in his view, harmed Washington’s strategic interests in the Middle East.

Yes: the Hagel nomination would be bad news for those wanting war with Iran. And so Lobe suggests that AIPAC might oppose Hagel because it is listening to Netanyahu:

“AIPAC and like-minded groups will no doubt be influenced by the views of Israeli Prime Minister Benjamin Netanyahu, whose right-wing coalition is favoured to win elections later this month.”

The major U.S. Jewish organisations and AIPAC have historically given great weight to the policy preferences of Israel’s elected leadership, even as they have privately urged them to take a different course.

MJ Rosenberg thinks that AIPAC won’t fight Hagel. Or maybe it will. Rosenberg hasn’t made up his mind. Two tweets, ten minutes apart:

“Has a foreign lobby ever tried to defeat a Cabinet appointment before?”

So Rosenberg is prepared to make this a fight over dual loyalty. The former operative for the Israel lobby who bravely gave us “Israel Firsters,” and sought to marginalize the neocons on that basis, wants AIPAC exposed as a foreign agent. So we are back to the fundamental issue at the heart of this conflict, The American people’s interest versus the Israeli government’s interest. Joy.

Thanks to Harry Hjalmarson and Ilene Cohen.