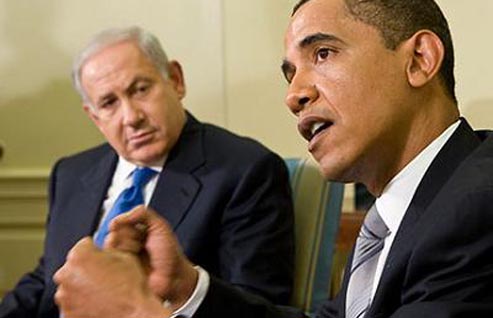 Watching the peace process between Israel and the Palestinians drag on year after year without conclusion, it is easy to overlook the enormous changes that have taken place on the ground since the Oslo Accords were signed 17 years ago.

Each has undermined the Palestinians’ primary goal of achieving viable statehood, whether it is the near-trebling of Jewish settlers on Palestinian land to the current numbers of half a million, Israel’s increasing stranglehold on East Jerusalem, the wall that has effectively annexed large slices of the West Bank to Israel, or the splitting of the Palestinian national movement into rival camps following Israel’s withdrawal from Gaza in 2005.

Another setback of similar magnitude may be unfolding as Barack Obama dangles a lavish package of incentives in the face of Benjamin Netanyahu in an attempt to lure the Israeli prime minister into renewing a three-month, partial freeze on Jewish settlement construction in the West Bank.

The generosity of the US president’s package, which includes 20 combat aircraft worth $3 billion and backing for Israel’s continued military presence in the Jordan Valley after the declaration of a Palestinian state, has prompted even Thomas Friedman of The New York Times to compare it to a “bribe”.

Israeli officials said yesterday they were still waiting to see a text of the deal worked out between Netanyahu and the US secretary of state, Hillary Clinton, in seven hours of negotiations.

In addition to the concession in the Jordan Valley and the offer of combat jets that would effectively double the annual aid from the US, the deal is said to include a promise by Washington to veto for the next year any UN resolutions Israel opposes and to refrain, after borders have been agreed, from demanding any future limits on settlement growth.

The signs are that Netanyahu will be able to secure the backing of his right-wing cabinet for a brief settlement freeze that this time, the US has indicated, will not include East Jerusalem.

So far, in attempting to resolve the conflict, Obama has nearly exhausted his political capital. There were intimations this week that the White House could not afford further humiliation and was going for broke.

The timetable for negotiations now calls for reaching an agreement on borders within three months – the duration of the settlement construction freeze – followed by a final resolution of the conflict within a year or so.

Washington’s hopeful logic is that a renewal of the freeze will be unnecessary in three months because an agreement on borders will already have established whether a settlement is to be considered included in Israel’s territory and therefore permitted to expand or inside Palestine and therefore slated for destruction.

In a similarly optimistic vein, the US apparently expects the problem of refugees simply to dissolve through the creation of a special international fund to compensate them. The right of return appears to be off the table.

If these obstacles can be surmounted this way – a very big “if” – only one significant point of contention, the future of East Jerusalem, remains to be resolved

This is where things get more awkward. The US is not proposing that the three-month freeze apply to East Jerusalem, after settlement-building there caused friction between Israel and the US during the last moratorium.

This concession and the outlines of a previous US peace proposal under president Bill Clinton hint at Washington’s most likely strategy. East Jerusalem will be divided, with the large settlement blocs, home to at least 200,000 Jews, handed over to Israel while the Old City and its holy places fall under a complicated shared sovereignty.

In the face of this intense US-Israeli diplomacy, Palestinians are dismayed. They have described the agreement between the US and Netanyahu as “deeply disappointing” and are demanding from the White House similarly generous inducements to ease their path back to negotiations. The Arab League, which has taken a prominent role in overseeing the Palestinian negotiations, has also objected to the deal.

The Palestinians fear they will be left with a patchwork of disconnected areas – what Israel has previously termed “bubbles” – as their capital.

If the Palestinian Authority president, Mahmoud Abbas, can be made to swallow all this, which seems highly improbable, he will then have to contend with Hamas, the rival Palestinian faction, which can be expected to do everything in its power to disrupt such an agreement.

And then there is Netanyahu. Few Israeli analysts think he has suddenly become more amenable to the US plans.

Neve Gordon, a politics professor at Ben Gurion University in the Negev and author of an important study of the occupation, believes the Israeli prime minister is simply playing the part demanded by Obama.

“He is taking the US ‘merchandise’ on offer, but will hold firm on key issues that guarantee the talks’ failure. That way he gets the credit for keeping the negotiations on track and lets the Palestinians take the blame for walking out.”

This sounds suspiciously like a re-run of the last proper peace talks, at Camp David in 2000. Then, Israeli intransigence stalled the negotiations, but Yasser Arafat, the Palestinian leader, was blamed by the US and Israel for their collapse.

The Camp David failure led to the outbreak of Palestinian violence, the second intifada, and the demise of the Israeli peace camp. Mr Netanyahu may be prepared to risk a repeat of both such outcomes from these talks if it means he can avoid making any real concessions on Palestinian statehood.