Obama and Bibi: Temperature Getting Cooler 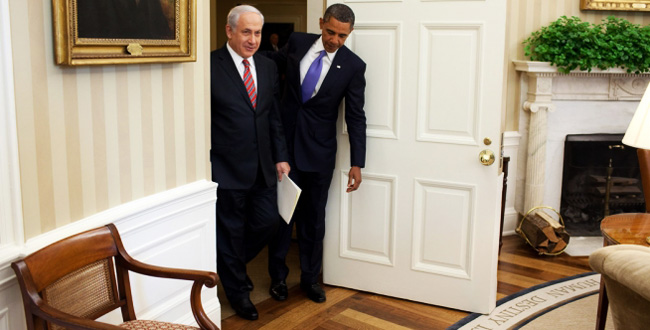 I’ve looked at the video of President Obama’s public appearance at the White House with Benjamin Netanyahu — their ninth meeting– and the weather has changed: Netanyahu looked distinctly unhappy while Obama looked confident. Note that in the transcript, Obama does the unpardonable and brings up the Palestinian issue and the peace process, giving Iran lower billing.

Then Obama says we want diplomacy and that Netanyahu also wants “to resolve this diplomatically.” But Netanyahu doesn’t want that. That’s a thumb in his eye.

And Obama said, “I look forward to the Prime Minister sharing with me his ideas about how we can increase the prospects of peace and security in the region.” Sort of putting the onus on Netanyahu (as Peter Voskamp notes).

And Netanyahu’s answer is that You are the big Satan and we are the little Satan, and “we are you and you are us.” War in the middle east, neverending.

I believe the conventional wisdom on the lobby might be shifting before our eyes: that the lobby has overplayed its hand. On CNN today they are talking about what an Iran war would do to gas prices and what sanctions are doing to people in Tehran. And now even James Fallows is angry about the way Israel is leading us around by the nose.

And Haaretz says the die is cast:

No one who knows Washington and its ways could mistake the subtext of his words. A strong commitment to Israel? Assuredly. Capitulation to the dictates of Prime Minister Benjamin Netanyahu? Not a chance. After a speech like that, his meeting with Netanyahu on Monday is almost superfluous: It already seems clear that Obama is determined not to grant him anything.

Here are some White House excerpts followed by a foreign pool report also hinting at the glumness of the encounter.

Obama: During the course of this meeting, we’ll talk about the regional issues that are taking place, and I look forward to the Prime Minister sharing with me his ideas about how we can increase the prospects of peace and security in the region.  We will discuss the issues that continue to be a focus of not only our foreign policy but also the Prime Minister’s — how we can, potentially, bring about a calmer set of discussions between the Israelis and the Palestinians and arrive at a peaceful resolution to that longstanding conflict.  It is a very difficult thing to do in light of the context right now, but I know that the Prime Minister remains committed to trying to achieve that.

And obviously a large topic of conversation will be Iran, which I devoted a lot of time to in my speech to AIPAC yesterday, and I know that the Prime Minister has been focused on for a long period of time.  Let me just reiterate a couple of points on that….

We do believe that there is still a window that allows for a diplomatic resolution to this issue, but ultimately the Iranians’ regime has to make a decision to move in that direction, a decision that they have not made thus far.

And as I emphasized, even as we will continue on the diplomatic front, we will continue to tighten pressure when it comes to sanctions, I reserve all options, and my policy here is not going to be one of containment.  My policy is prevention of Iran obtaining nuclear weapons.  And as I indicated yesterday in my speech, when I say all options are at the table, I mean it.

Having said that, I know that both the Prime Minister and I prefer to resolve this diplomatically.  We understand the costs of any military action.

PRIME MINISTER NETANYAHU:  …I think that, as you said, when Americans look around the Middle East today, they see one reliable, stable, faithful ally of the United States, and that’s the democracy of Israel.

Americans know that Israel and the United States share common values, that we defend common interests, that we face common enemies.  Iran’s leaders know that, too.  For them, you’re the Great Satan, we’re the Little Satan.  For them, we are you and you’re us.  And you know something, Mr. President — at least on this last point, I think they’re right.  We are you, and you are us.  We’re together.  So if there’s one thing that stands out clearly in the Middle East today, it’s that Israel and America stand together.

I think that above and beyond that are two principles, longstanding principles of American policy that you reiterated yesterday in your speech — that Israel must have the ability always to defend itself by itself against any threat; and that when it comes to Israel’s security, Israel has the right, the sovereign right to make its own decisions.  I believe that’s why you appreciate, Mr. President, that Israel must reserve the right to defend itself.

And after all, that’s the very purpose of the Jewish state  — to restore to the Jewish people control over our destiny.  And that’s why my supreme responsibility as Prime Minister is to ensure that Israel remains the master of its fate.

For their ninth meeting inside the Oval Office since 2008, the tone was definitely somber between The President of The United States and The Israeli Prime Minister. …

When Prime Minister Netanyahu spoke to the President, he was smiling a little at first but then he looked President Obama in the eyes and said, “Israel must defend itself.” Then, slowly articulating his words in perfect English, the Israeli PM said in a grave tone of voice, “My personal commitment is a commitment to the security of Israel. Israel has the sovereign right to make a final decision. My supreme responsibility as Prime Minister of Israel is to ensure that Israel remains the master of its fate”

President Obama returned his gaze with a grave expression, his left hand resting calmly on his leg.

Inside the Oval Office with the President, your pooler saw Secretary of State Hillary Clinton and Deputy National Security Advisor for Strategic Communications Ben Rhodes standing near the window. On the Israeli side, the Israeli ambassador Michael Oren was there with the national security adviser Yaakov Amidror and the political adviser to the PM Aaron Dermir. General Locker, The Israeli military secretary, was also invited to be part of the meeting with Liran Dan, the media adviser and Gil Schefer, the Chief of Staff and special adviser to Prime Minister Isaac Molcho.

..On the Israeli side, some Israeli reporters told your pooler that they were inside the Prime Minister’s plane when he came to North America. According to them, the Prime Minister spoke to them for a few minutes on the plane and just made “nice small talk about the weather, nothing else.” Inside the White House, Jacob Eilon, nightly news anchor for channel 10 in Israel, was part of the Israeli pool and told your pooler, “Both leaders would like to label the meetings as positive rather than create a showdown. I wish we knew what was happening.”