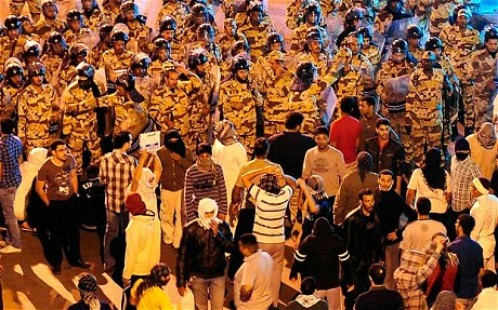 Friday was Saudi Arabia’s “day of rage”, planned for and anticipated for weeks. But, in the event, there wasn’t even a grumble – unless you count the ongoing protests in the eastern province which had been going on for a week.

The protests in the east, where the Saudi Shia minority is concentrated, were mostly to call for the release of political prisoners. However, across the country there was silence. Many were expecting it to be so, but some wonder why.

Two main factors played a role in this silence. The first was the government’s preparation, with the interior ministry’s warning and the senior clerics’ religious decree prohibiting demonstrations and petitions.

During the week there was also a huge campaign to discourage demonstrations. Saudis were bombarded on TV, in SMS messages and online with rumours that the demonstrations were an Iranian conspiracy, and that those who went out in the streets would be punished with five years’ prison and fines in the thousands of riyals.

Finally, on Friday itself, there was an intimidating security presence all over the major cities, with checkpoints on the roads and helicopters flying above.

The second and more important factor discouraging protests was a huge question mark regarding who was calling for them. What started on a Facebook page as a call for the creation of a civil society with a list of demands including a constitutional monarchy and a call for public freedoms and respect for human rights eventually turned into a page where sectarianism was openly practised and Islamists were praised.

The grassroots movement was gradually taken over and given a Jihadi name: Hunain, recalling a famous battle in the early history of Islam. Sa’ad al-Faqih and other anti-monarchy people took over. On his channel, Islah TV, he assigned locations and gave instructions on how to conduct a protest, with tips ranging from what to wear to what to do if tear gas gets in your eyes. He hijacked the grassroots movement for reforms into an outright call for an end to the monarchy and the creation of a new Islamist state – a cause similar to what Bin Laden and al-Qaida were calling for. These types of calls no longer have support within Saudi Arabia.

Meanwhile, none of the prominent Saudis who drafted the petitions during the last few weeks openly supported the demonstrations. These academics, actors, writers, and public speakers whose petitions drew thousands of Saudis to bravely sign their names, did not call for the demonstrations on Friday nor say that they were participating.

The Monday before, in a weekly meeting of a group of reformists, it was noted that for the overwhelming majority of them, there were no plans to be part of the “Hunain Revolution”. Even Saudis who considered participating said they would sit out the first day, just to gauge whether those coming out were reformists or anti-monarchists, so as to not be associated with the latter.

As to how Saudis feel now that the day of no rage has come and gone, a hashtag on Twitter, #After11March, was created to discuss just that. There, most Saudis expressed their surprise at the extent to which the government took any threat of demonstrations seriously. Also, many wrote that they had not expected any large-scale protests to happen. As Soumz, a fellow blogger and medical student, tweeted:

“Things i learned on #Mar11: the gov listens to you (though chooses to ignore you) AND the gov is afraid of you.”

Fouad al-Farhan created a poll asking how people felt about the non-event. While it may not be scientific, it’s still telling. Four hundred took part and 37% felt relieved that nothing happened because they are opposed to any form of demonstrations; 30% felt disappointed that nothing happened because they believed demonstrations would push reforms forward; only 2% were disappointed because they were expecting a revolution on the same scale as Tunisia and Egypt; and finally 32% were optimistic that reforms are going to happen regardless of whether or not protests materialize.