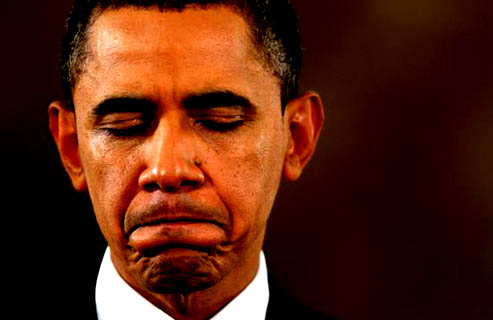 The Middle East policies of US President Barack Obama may well prove the most detrimental in history so far, surpassing even the rightwing policies of President George W. Bush. Even those who warned against the overt optimism which accompanied Obama’s arrival to the White House must now be stunned to see how low the US president will go to appease Israel – all under the dangerous logic of needing to keep the peace process moving forward.

Former Middle East peace diplomat Aaron David Miller argued in Foreign Policy that “any advance in the excruciatingly painful world of Arab-Israeli negotiations is significant.” He further claimed: “The Obama administration deserves much credit for keeping the Israelis, Palestinians, and key Arab states on board during some very tough times. The U.S. president has seized on this issue and isn’t giving up — a central requirement for success.”

But at what price, Mr. Miller? And wouldn’t you agree that one party’s success can also mean another’s utter and miserable failure?

Secretary of State Hilary Clinton reportedly spent eight hours with Israeli Prime Minister Benjamin Netanyahu only to persuade him to accept one of the most generous bribes ever bestowed by the United States on any foreign power. The agreement includes the sale of $3 billion worth of US military aircrafts (in addition to the billions in annual aid packages), a blanket veto of any UN Security Council resolution deemed unfavorable to Israel, and the removal of East Jerusalem from any settlement freeze equation (thus condoning the illegal occupation of the city and the undergoing ethnic cleansing). But even more dangerous than all of these is “a written American promise that this will be the last time President Obama asks the Israelis to halt settlement construction through official channels.”

Significant. Achievement. Success. Are these really the right terms to describe the latest harrowing scandal? Even the term ‘bribe’, which is abundantly used to describe American generosity, isn’t quite adequate here. Bribes have defined the relationship between the ever-generous White House and the quisling Congress to win favor with the ever-demanding Israel and its growingly belligerent Washington lobby. It is not the concept of bribery that should shock us, but the magnitude of the bribe, and the fact that it is presented by a man who positioned himself as a peacemaker (and actually became certified as one, courtesy of the Nobel Peace Prize Committee).

Equally shocking is the meager return that Obama is expected to receive for hard-earned US taxpayers’ dollars. According to the Atlantic Sentential, this will be “a measly three month extension of the settlement moratorium that originally expired in late September.”

Acknowledging from the onset that these are mere “midterm maneuvers”, Noah Feldman, writing in the New York Times, asks the question: “Can Obama succeed where so many others have not?” He preludes his answer with: “Israel and the Palestinian Authority will not, of course, make things easy.”

Palestinian Authority President Mahmoud Abbas, whose mandate has already expired, must be living the most humiliating and difficult moments of his not so distinguished career. At one stage he had hoped that the advent of President Obama would spare him and his authority further embarrassment. Imagining the president would side with his ‘moderate’ position, he placed all his eggs in the Obama basket, even bidding against the democratically elected government of Palestinians in the occupied territories. He went as far as to halt an international investigation into Israeli crimes in the recent Israeli war on Gaza so that not to frustrate Netanyahu’s government or upset the pro-Israeli sensibilities in the US Congress.

True, Abbas tried to appear as a confident and self-assertive leader at times. He asked for a chance to think about the resumption of peace talks, conditioned his acceptance on Israeli actions that never really actualized, and finally sought the help of the Arab League, a beleaguered and muted organization without any political mandate.

How did Abbas and his authority make things ‘difficult’ for the US, Mr. Feldman? Would any self-respecting government agree to concessions that are made on its behalf without the opportunity to offer its own input? This is exactly what the PA has repeatedly done under Abbas.

Still, many Israelis are not happy with the barter. Caroline B. Glick, writing in the Jerusalem Post, described the freezing of construction in the illegal Jewish settlements in the West Bank as “discriminatory infringement on the property rights of law abiding citizens (that) is breathtaking.” She had the hubris to consider the pitiable moratorium as equivalent to “land surrenders.”

As for the major F-35 deal, it is “simply bizarre,” she argued, for after all, “Israel needs the F-35 to defend against enemies like Iran.”

Mind-boggling. US generously hands Palestinian rights to Israel on a silver platter, and the far-right mentality, which now governs Israeli mainstream politics and society, still finds it unacceptable.

But aside from this arrogant Israeli response, and the US media’s attempts to find the positive in Obama’s latest scandal, one question must be raised. What happens now that Obama has finally shown he really is no different from his predecessors? That the United States has lost control of its own foreign policy in the Middle East? That, frankly, Netanyahu has proved more resilient, more steadfast, and more resourceful than the American president?

Shall we go on making the same argument, over and over again, or has the time finally arrived for Palestinians to think outside the American box? Can Arabs finally venture off to seek other partners and allies in the region and around the world who understand the link between peace, political stability, and economic prosperity? It may perhaps be time for them to further their relationship with Turkey, to reach out to Latin America, to demand accountability from Europe and to try to understand and engage China.

The latest US elections have showed that the Obama hype has run its course in the US itself. One can only hope that Palestinians, Arabs and their friends will realize that it was all indeed a hype -before it’s too late