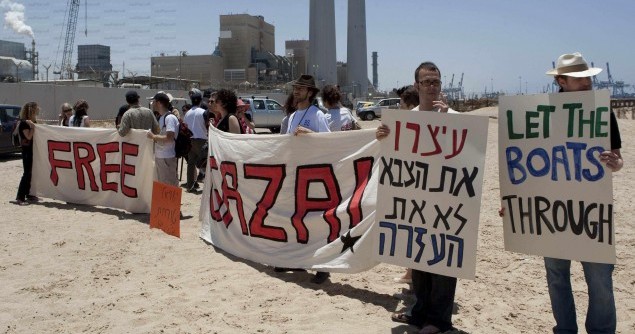 Russian writer Leo Tolstoy made a simple observation that fittingly describes Israel’s peace and just activists. He said, “Freethinkers are those who are willing to use their minds without prejudice and without fearing to understand things that clash with their own customs, privileges, or beliefs. This state of mind is not common, but it is essential for right thinking.”

Palestinians have the highest regard for Israel’s ‘freethinkers‘. They are a rare breed- who despite the many privileges their religious beliefs and citizenship endows them bravely challenge Israeli policies, practices and assumptions. They are moral giants who refuse to accept Israel’s blind unquestioning patriotism that fuels much cruelty and suffering on Palestinians (Israel’s policy victims) and Israelis (who administer and sanction its brutality). They are their peace partners in pursuit of one mutual objective – to liberate Israelis from the moral burdens of its decades long dehumanizing policies and free Palestinians from Israel’s abusive and cruel occupation.

Israel’s security agency Shin Bet (Shabak) was established in 1948 to monitor Palestinian Israelis; and in 1967 it’s decree was expanded to monitor the political activities of Palestinians in the Occupied Territories, and Gaza. Now its mandate includes Israel’s Jewish peace activists who question their government’s policies. Shabak aims to halt collaboration between Israeli and Palestinian peace and just advocates. Shin Bet’s keen interest in Israel’s peace camp indicates that the Palestinian and Israeli non-violent strategies are effective in spite of the recent claims that suggest “Israel’s peace camp is dead.” These opinions overlook and underestimate the growth and potential of Israel’s grass root peace movement, which is clearly worrying Israel’s current government.

Peace and human rights activists never imagined the scope and range of the flurry of bills Israel’s Knesset initiated to mute free expression; color the national discourse; and limit discussion on the merits and moral cost of Israel’s occupation policies. While these laws were first initially passed to target Palestinians, today they are used to investigate Israeli Jewish peace activists. Palestinians understand that not all citizens are equal in Israel. They also are well aware that an Israel without a constitution its judicial system is rigged against peaceful protesters; nevertheless they hoped Israel’s Declaration of Independence and its list of guarantees (that has yet to apply to Palestinian Israelis) would at the least provide legal protections to their Israeli Jewish peace partners. Unfortunately these brave Israelis are left vulnerable and open to interrogation, intimidation and abuse with little legal protection from within Israel or objection from the larger Jewish community abroad- but a few most blindly follow Israel’s official script.

In 2009, the Knesset passed the Nakba Law threatening individuals with imprisonment and organizations with loss of public funding for recognizing the Palestinian Nakba (1948 catastrophe). The Nakba Law is meant to make sure that Israelis omit Palestinian history and suffering sparing them from reflecting on the harm unleashed on Palestinian Israelis or their Palestinian neighbors who remain homeless refugees. In January 2011, Israel’s Knesset passed a bill to fund a parliamentary commission to investigate Israeli human rights organizations and peace groups categorizing their activities as “delegitimizing” Israel and a threat to its national interests. The growth and momentum of the Palestinian non-violent international Boycott, Divestment and Sanctions (BDS) movement prompted the Knesset to pass the boycott bill-a one of a kind bill unlike any law legislated by any other country including the US. The boycott bill specifically bars boycotts of illegal settlement products or Israeli companies operating within the West Bank and East Jerusalem. The bill provides Israel’s illegal settlement enterprises legal provisions to sue anyone within Israel or the West Bank inclined to object to Israel’s settlement policies through boycott with legal means to exact unlimited compensation.

It is important to note that Israelis are still free to organize and participate in boycott campaigns, but they are not allowed to participate, initiate or endorse boycotting illegal settlements, their companies, institutions, or products. Israelis are free to  boycott Jewish businesses open during Sabbath; and their government still sanctions the boycott of Palestinian Israeli or Palestinian owned businesses and products- because such boycotts are considered legitimate patriotic actions serving the national interest of Israel.

Initially these bills were criticized, but since they have become useful instruments to investigate the activities of Israeli human right organizations, groups or individuals challenging Israeli policies, involved or supportive of the nonviolent Palestinian peace movement. Today Israelis who support Palestinian calls for ending their occupation or question Israeli policies are accused of  “delegitimizing” the state of Israel. These legislative bills are used to sanction the interrogation of Israeli citizens- whether they protest Israel’s illegal Separation Wall, its settlement policies, house demolitions, land confiscation or refuse to serve in the IDF. These laws aim to control and regulate the work of Israel’s peace movement; arrest the growth of Israel’s Boycott from Within; control the number of Israelis who advocate on behalf of Palestinian prisoners; collaborate with Palestinian villagers or object to settler’s uprooting of Palestinian olive trees.

Palestinian and Israeli peace advocates are concerned with the recent rise of antidemocratic and xenophobic  in Israel that is poisoning Israel’s political climate and society. Where leaders loudly declare that Palestinians, Africans, and other non- Jewish minorities are a demographic threat that needs to be controlled. They have little regard to the impact their words and actions on the moral compass of Israelis. Israel’s parties and politicians are also employing fear and ambiguous labels to achieve narrow political agendas and mobilize political support. Israel’s politicians and their countless legislative initiatives are creating hyper national parties that feed on a highly fractured and vulnerable society that has internalized fear, suspicion and loathing of the other.

Palestinians also recognize that Israel is an army nation, where boundaries between the IDF and society are blurry. Israelis’ regard service in the IDF as the highest honor. IDF mandatory service provides young impressionable soldiers with one unifying national identity, experience and one enemy- the Palestinians. Because of Israel’s unique national military character many of Israel’s peace advocates are former IDF soldiers who after considerable reflection on the cost of the Israeli occupation policies on both Palestinians and Israelis break rank and join hands with Palestinians. Consequently they are seen as undermining and weakening Israel’s national will.

Palestinians understand the tremendous courage it takes for Israel’s ‘freethinkers’ to buck the system. They are appreciative of the moral fortitude it takes to recognize the ills of Israel’s occupation policies that brutalizes and degrades the IDF soldiers carrying and administering it, the Israeli politicians who approve and legislate its policies, and the Israeli society that sanction its oppressive daily practices.  These young and old Israeli activists are reaching out beyond the confines of their comfortable life to work with like-minded Palestinians by building trust, partnerships and understanding.

Israelis who question and challenge Israel’s occupation policies are Palestinian household names and heroes. Any attack on their legitimacy is an attack on the non-violent movement in both camps. Israel’s ‘freethinkers‘ play a critical and necessary role that helps maintain Palestinian faith in the possibility of an Israel free of discrimination, hate and bias.  They are the moral guard that protects Palestinians from succumbing to branding all Israelis as supporters of Israel’s brutal practices. Israel’s attempt to impede the collaboration among Palestinians and Israelis seek to compromise the integrity of the Palestinian non-violent movement. The absence of Israel’s peace activists will create the moral void between the two groups that has been instrumental in fending off the distrust and animosities that hovers and permeates after every IDF and settler encounter.

Branding Israel’s peace movement with the ” delegitimizing” label is a formidable challenge meant to intimidate Israel’s peace activists. It’s objective is to kill their (Palestinian and Israeli) collective dream for a better future and arrest the development of collaborative relations and understanding between the two peoples.  The label while ambiguous, allows Israeli officials to imply that Israelis who question their government’s narrow national agenda and destructive policies are a considerable threat. While Shabak’s silencing campaign is a concern to Palestinian and Israeli peace camp advocates, it also provides concrete evidence of the important role Israel’s peace activists’ play that surpasses their small number and political weight. Shabak’s tactics also demonstrates that these cross lateral partnerships between Palestinian and Israeli non- violent activists are making a difference and alarming Israel’s right wing politicians- who are today its dominant and overriding political force within Israel.

Palestinians seek, find and cherish Israel’s fearless ‘freethinkers’. These liberated Israelis are their partners and hope for building and establishing their mutual dream- to free Palestine and liberate Israel. Together they work to free Palestinians from Israel’s oppressive occupation and liberate Israelis from the shackles of its tyrannical illegal settlement ideology, militaristic culture, narrow nationalistic and extreme right exclusionary policies that have no room for descent.

Israel’s Knesset and security police miss to appreciate the power of ‘free thinkers’ who time and again manage to change the course of history. Banded together to liberate two peoples they articulate and demonstrate their shared dream.  They will not be stopped by monitoring, interrogation or even arrest- Israel’s ‘freethinkers’ are transformative agents unafraid to expect more of themselves and their people.