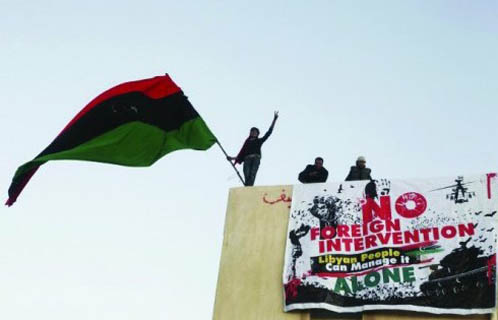 The brutality of Libyan leader Moammar Ghaddafi, and his refusal to concede power, is costing Libya much more than innocent lives. The country is now also facing a possible loss of future independence and sovereignty. From its early days, the Libyan revolt seemed to take a difference course than those of other Arab countries. It represented a window of opportunity for the United States and its western allies to reposition themselves, slowly but surely, around a conflict that promised gruelling and bloodier times ahead.

A visit by Republican Senator John McCain to Benghazi on April 22, was described by a CNN online report as “a major morale boast” for the Libyan rebels. His arrival followed a US decision to deploy predator drones to Libya, thus promising a greater American role in the war. According to McCain, drones are not enough, and more will be needed to break the “significant degree of stalemate.” He described Benghazi as a “powerful and hopeful example of what a free Libya can be.”

A small crowd chanted as the US senator met with members of the Transitional National Council: “Thank you John McCain! Thank you Obama…Thank you America! We need freedom! Gadhafi go away,” according to the same report.  This decidedly American push has already inspired many neoconservative ideologues who unfailingly endorse war against any Arab or Muslim country that fail to tow their line. A major hub for US intervention – most often in support of Israeli interests – is the American Enterprise Institute, credited for introducing many suspicious characters to Iraq following the ousting of Saddam Hussein. AEI scholar Michael Rubin said that the visit by McCain “brings more limelight to the rebels.”

But Rubin wants even more than this. “If McCain can meet the people for whom we are fighting, why not Secretary of State Hillary Clinton? Why not Vice President Joe Biden?”

There are many indications to suggest that the US is upgrading its involvement in the Libyan war, following a brief period of political and military vacillation. Much talk of a pending stalemate in the unfair fight between poorly armed rebels and Ghaddafi’s forces preceded the actual standoff on the ground. With no meaningful Arab action, and NATO’s choosy military involvement proving to be largely ineffective, the US is now being urged to ‘do something.’

‘Doing something’ is, of course, a difficult endeavor in a highly volatile political season in Washington. As miscalculations can be decisive factors in winning or losing elections, the Obama Administration is trying to play its cards right, moving towards more tangible involvement in Libya, but with much caution. What is clear, however, is that the involvement will be more visible than before.

McCain’s visit is significant, not just because of his political seniority, but also owing to his former ‘war hero’ status. In Washington, military men are more trusted than politicians. As he ushered in greater American involvement in Libya, Adm. Mike Mullen, Chairman of the Joint Chiefs of Staff, was contributing to the built up of rhetoric from Baghdad. The situation in Libya is “certainly moving towards a stalemate,” he told US troops during a visit. “Gaddafi’s gotta go…(and coalition actions)…are going to continue to put the squeeze on him until he’s gone,” he said, according to Reuters (Washington Post, April 22).

Ghaddafi’s brutal treatment of civilians made their protection a top priority for the country’s rebels. Benghazi-based rebel-spokesman, Abdul Hafidh Ghoda, told Aljazeera: “There’s no doubt that (the US decision to send unmanned drones) will help protect civilians, and we welcome that step from the American administration.”

But since the destruction of “somewhere between 30 and 40 percent” of Gaddafi’s ground forces (according to Mullen’s estimation) achieved very little by way of protecting civilians, more steps are expected from the Obama Administration.

Now we are witnessing a jubilant return of previously muted calls for interventionism and regime change in favor of US-style democracy. While Libya may not have specifically fallen under the Washington radar, it now presents an opportunity too good to miss.

This realization might challenge President Obama and force him to revise an earlier claim that the US’ goal was not regime change in Libya. In a televised speech on March 29, Obama said, “If we tried to overthrow Gaddafi by force our coalition would splinter. We would likely have to put US troops on the ground to accomplish that mission or risk killing many civilians from the air.”

But yet again, a stalemate might end up splintering Libya itself. The US and its allies would either accept a divided Libya – and exploit this division whenever possible – or raise their involvement to break the deadlock. If they opted for the latter, there is already much rhetoric to support an upgrade in the military mission. “Some nations may be able to turn a blind eye (to) atrocities in other countries. The United States of America is different, and as president I refuse to wait for the images of slaughter and mass graves before taking action,” Obama said.

A US victory over Gaddafi may be seen as an opportunity to boost Obama’s faltering reputation just in time for the 2012 presidential elections. But history has repeatedly shown the high cost of political and military arrogance. Obama himself admitted that in Iraq, “regime change…took eight years, thousands of American and Iraqi lives, and nearly $1 trillion. That is not something we can afford to repeat in Libya.”

Since the military plunder in Iraq, the US has resorted to softer and increasingly clandestine methods to destabilize ‘unfriendly’ countries. Recent Wikileaks revelations show that Syria was always positioned as one of these targets. Libya seemed too stable and somewhat too distant from recent US foreign policy estimations. However, the ongoing violence in the country, and fear of the long-term repercussions of a military stalemate, could change all of that.

In Washington, mood swings occur too quickly and too often. Political opportunists know well how to turn a challenge into an opportunity, and an opportunity into an all-out war.