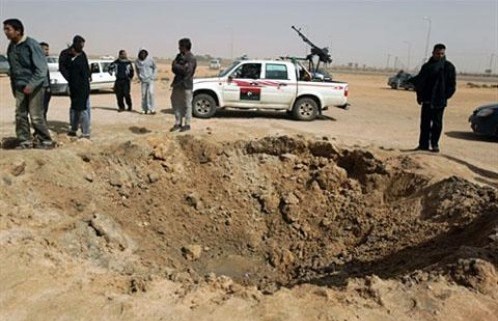 The UN-sanctioned military action against Colonel Gaddafi’s forces has begun.  What we’re going to see is a rolling back of his troops all the way back to Tripoli, or to possibly Sirte, ie the area of historical Tripolitania.  Meanwhile the rebel army will be tasked with the chore of proving its mettle, something it has yet  to do.

I’m not sure exactly what’s happening on the ground.  Yesterday we were told that Gaddafi troops were fighting their way into Benghazi, yet the Americans said they were 160 km away.

I never saw any proof of mercenaries fighting for Gaddafi and talk of that has died down.

Right now the situation looks a lot like the old Ottoman vilayets of Tripolitania and Cyrenaica.

It is up to the rebels to prove they’re not a rabble.  Or worse.

The anti-Gaddafi camp must now prove its mettle and make use of the military imbalance that has shifted in its favor.

Meanwhile Tripoli broadcast 2 audio-only speeches by Muammar al-Gaddafi after the beginning of the bombing campaign against his forces. I was immediately struck by the disembodied voice and immediately reminded of that of Saddam Hussein after the beginning of Desert Storm.  But there is a big difference: Saddam was viewed by millions of Arabs, rightly or wrongly, as a leader, Gaddafi is seen as a nutcase.

Unlike Saddam who called on the Iraqi people to “Fight them”. Gaddafi did not call upon his people to resist.  I find that strange, but not unexpected from someone like him.  He did say that he was arming the Libyan people now (as if he would take that chance).

What is certain is that this military action cannot last indefinitely.  Otherwise it will risk alienating Arab public opinion which is at the worst non-committal so far.

Not so Amr Moussa, the Secretary General of the Arab League who after suspending Libya from the League and calling for a No-Fly Zone now seems to be having second thoughts.

Today he said, “What is happening in Libya differs from the aim of imposing a no-fly zone, and what we want is the protection of civilians and not the bombardment of more civilians.”

Well, I’m sorry, Mr Moussa.  What did you think a No-Fly Zone means?  You were Foreign Minister of Egypt when a No-Fly Zone was imposed on Iraq and should know full well what it means.  The first targets were inevitably going to be Libya’s air defenses and command and control structures followed by Gaddafi’s armor on the ground.

I wonder if this about-face is not somehow connected to Moussa’s prospective candidacy in the upcoming presidential elections in Egypt.  You know those elections, the ones to choose a replacement for Hosni Mubarak whom Amr Moussa served for 10 years as Foreign Minister.