Libya: The West Must Make Its Decision Now 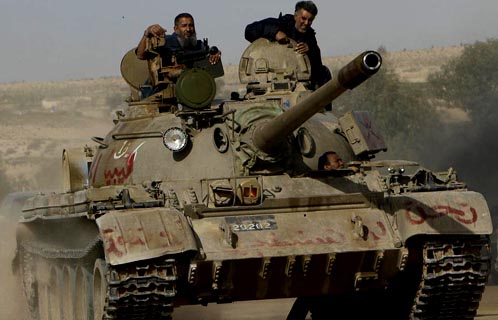 Libya is at a dangerous crossroads and unlike the peaceful outcome of popular uprisings in Tunisia and Egypt; the bloody confrontations between Libyan rebels and pro-Qaddafi combatants may last for weeks or even months.

We are looking at different scenarios in Libya, where a spontaneous uprising has quickly turned into an armed revolution where both sides are incurring heavy casualties.

As the international community, led by the United States and its Western allies, debates its options which range from doing absolutely nothing to enforcing a no-fly zone over Libya, to taking sides and intervening on the ground, the worst thing that could happen now is for Qaddafi and his opponents to arrive at a stalemate.

An impasse would push this vast desert country of about six million inhabitants towards a state of lawlessness, chaos, humanitarian crisis and de facto partition. It could also fester into other problems for Africa and Europe.

On the ground the rebels are finding it difficult to push through towards the west and Tripoli as they encounter more organized and better armed resistance. So far Col. Muammar Qaddafi is in control of the capital, the strategic city of Sirt and the oasis town of Sabha. He is fighting to regain control of Al Zawyia and Musrata, two important towns on the west and east of Tripoli. His air force remains active and has been pounding rebel controlled areas near Ras Lanuf, Buraiga and Ougaila in the east.

The rebels, on the other hand, are dependent on small fire-arms and anti-aircraft artillery. They are moving away from their supply lines in Banghazi and Agdabia as they advance towards the west. Although a military council has been formed by the transitional council, most rebels lack military training and discipline.

It is unlikely that either side will make a crucial breakthrough in the near future. Qaddafi’s forces are not in a position to advance to the east and run over rebel-held towns. But they are able to repel attacks on Sirt and others for the time being. The rebels, who had met stiff resistance at Ras Lanuf and Bin Jawad, will now bolster their defense lines and wait for reinforcements and or foreign intervention of some sort.

The Libyan revolution could easily slip into a prolonged civil war; especially that it now appears that Qaddafi is in no mood to escape or hand over power. He is feeling his isolation but has not shown any intention to compromise. When his son Saif El Islam talked about Libya being different from Tunisia and Egypt, he was right. In the case of his father, the regime seems to be holding tight to power using a huge largesse to buy mercenaries and favors from friendly countries while playing the tribal card to cement his popular base.

To make this battle a bit more even the United States and its western allies will have to decide on the veracity of enforcing a no-fly zone to cripple Qaddafi’s air force. Unless the regime loses this obvious advantage it will be difficult for the rebels to decide the final battle in Tripoli. So far the West has been divided on the issue. President Barack Obama is being pressured by key figures in Congress to take up the challenge. To do this he needs Europe and NATO members to back him. There is a case to be made, but he has not made it yet.

Until Obama and his allies decide on the no-fly zone, they can do other things. Britain has already tried to make contact with the provisional council in Benghazi. Paris has recognized that council as the legitimate representative of the people of Libya. The Arab countries are baffled and unable to make up their mind. But if the international community follows France’s steps then military supplies can be sent to the rebels. The world, and most Libyans, is against direct military intervention by the West. From different standpoints a direct intervention sounds bad. America is no mood for another military adventure, but more so are Libyans who fear that Qaddafi may use that to his side. Libya’s liberation must be achieved by the people of Libya without direct intervention.

Meanwhile, if the West dithers and lets things drag then Qaddafi may resort to unconventional tactics. There are two scenarios here; one has to do with his potential possession of banned weapons, both chemical and biological, and the second is his determination to pull in Europe and others into this conflict. He has warned the Europeans of waves of illegal migrants pushing towards their shores and he insisted that Al Qaida wants to create a hub in Libya and copy the Somali example.

Both scenarios are possible. The longer Qaddafi holds on in his bunker in Bab El Azeizieh, the greater the damage that he can incur. The West must decide now which side it will take. It must do so soon and accordingly it must step in to back the rebels in their fight to liberate their country and keep it united.

One Response to Libya: The West Must Make Its Decision Now