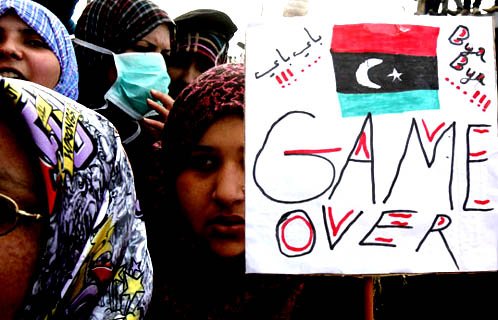 The Arab Spring has had it’s ups and downs. What began with a man lighting a single match in Tunisia, has spread throughout the region like a wildfire, leaving no land unscathed in its own way.

In January and February we saw two tyrannical governments topple like a deck of cards as the people of Tunisia and Egypt took back their countries by taking to the streets. The joy was overwhelming, and so was the momentum. No sooner had Mubarak left, when all eyes shifted to Libya and the start of the February 17 movement.But then things took a more disheartening route as countries like Libya, Bahrain and Syria met their opposition with brutal force. We began to see the downside of revolutions. We began to see the risk factor. The disincentive. The consequence of what happens when people without guns stand up to people with guns. The momentum of the Arab Spring began to crumble and what the region discovered was that some governments would be harder to topple than others.Enter persistance. Enter Libya. Enter the Arab Spring 2.0 – a reaffirmation of hope and a reminder that freedom always comes at a cost. Libya’s achievement is exactly what was needed to remind people of what can be achieved if fought for valiantly. It is also a reminder to other Arab regimes who were just beginning to regain some degree of comfort that uncertainty remains; that the fires of the Arab spring are still burning and that their streets are still highly flammable.

Staying up last night to watch the events unfold on the streets of Tripoli, I cannot help but feel the sense of confidence that swept across the region last night; radiating from TV, computer and mobile screens. I could not help but hear the deafening silence of those who believed the Arab spring had already met its doom, and those who had abandoned their hope in the capabilities of average citizens. The silence of the same people who are content with the grandeurs of their status quo. The same people that have consistently demonstrated their inability to understand the value of freedom, and especially what it’s worth to people who don’t have it, and people who cannot afford it. It is thrilling to see their beliefs shaken to the core; to see them watch a people risk the certainty of the status quo for the uncertainty of something greater, and achieve it.

So to the Arab leaders that remain in power I cannot help but point out the obvious. Not all evolution mandates revolution, but when you refuse to evolve, when you nurture an environment where your people have less and less to lose, where they are willing to risk their status quo, their fear of the unknown, and their very lives, all for an intangible aspiration – then you force a revolution. You create a situation where people are willing to gamble everything, in hopes of achieving anything; anything but this. Because anything is better than this. And all the guns, tanks, money and promises won’t be able to convince those people otherwise.

The time for diplomacy has ended. The era of compromises, broken promises and short-comings is drawing to a close. The cost of hubris has been revealed. And if history is written by the victors, then the pen and the keyboard is now in the hands of average citizens, where the revolution is crowd sourced. Where the masses meet mass media. If Tunisia broke a taboo, and Egypt created momentum, then Libya has lowered the barriers of entry and nudged the Arab Spring towards experiencing the political equivalent of economies of scale.

So thank you Tunisia for lighting a flame. Thank you Egypt for adding the fuel. And thank you Libya for keeping it alive.