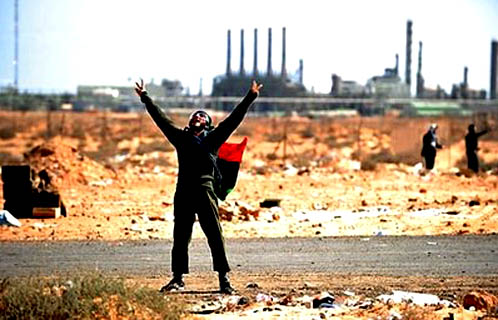 With NATO-backed rebels capturing Tripoli and members of Colonel Moammar Qaddafi’s family, Libya could emerge as the Middle East and North Africa’s first revolution rather than its third successful revolt following the toppling earlier this year of autocratic leaders in Tunisia and Egypt.

In many ways that could mean that change in Libya could move faster and deeper but also prove to be far messier than the transitions in Tunisia and Egypt.

A first litmus test is likely to be the fate of captured members of Mr. Qaddafi’s family as well as of senior officials of the Qaddafi regime. Rebel forces advancing into Tripoli captured early Monday Mr. Qaddafi’s most prominent son and one-time heir apparent, Saif al Islam al Qaddafi, while another son, Mohammed al Qaddafi, turned himself in.

The rebel’s response to the International Criminal Court’s demand that Saif al Islam be handed over to it will serve as an early indication of what transition in Libya will look like. The court has issued an international arrest warrant for Saif al Islam as well as for his father and Abdullah al Senoussi, the head of Mr. Qaddafi’s intelligence service, on charges of war crimes.

However messy and perhaps violent transition in Libya proves to be, Libyans unlike Egyptians and Tunisians will be in a position to dismantle the former regime’s apparatus. Hard fought in six months of bitter fighting, the rebels are gaining control of all of Libya after having defeated Mr. Qaddafi’s security and military forces. The building blocks and assets of the ancient regime, including the intelligence service are being destroyed and weaponry and military equipment is falling into rebel hands.

The destruction of the regime and the takeover of control of the country rather than the toppling of its head is what mark the Libyan uprising as a revolution as opposed to the revolts in Egypt and Tunisia. The toppling of Messrs. Zine El Abedine Ben Ali and Hosni Mubarak was relatively quick and peaceful compared to the drawn out and bloody battle that this weekend brought the rebels to Tripoli’s symbolic Green Square.

Those revolts however left the infrastructure of the ancien regime in place and in the case of Egypt put the military which has been part of the country’s political power structure for the past 60 years in charge of its transition to democracy. As a result, both Egypt and Tunisia are still struggling with limited success to limit, if not block, elements of the ancien regime and political forces that operated under it from playing dominant roles in their country’s future.

Libya distinguishes itself as a revolution rather than a revolt also by the fact that the country’s new leadership will control the nation’s economic assets and be able to shape economic policies unlike Egypt and Tunisia where the former economic players remain in place and retain their operations while protesters struggle to ensure that their dream of political freedom and enhanced economic opportunity becomes reality.

For the Libyan rebels, this means on the one hand control of the country’s oil installations but also the immediate task of having to secure basic services such as food, water and energy; resume oil exports to ensure funding for the new government; and kick start Libya’s stagnating economy.

The jury is out on whether Libya, with destruction of the ancien regime rather than just the removal of its head, will prove to be a model for what liberated Middle Eastern and North African states will look like or an example of a revolution gone awfully wrong.

The TNC, in a first hopeful sign, last week issued its constitution that lays out in detail its plans to manage the transition to democracy stressing principles such as a multi-party system, equal rights, including for women, freedom of expression, independence of the judiciary and governance. The document, in recognition of the country’s diversity, would make Libya the first country to describe itself simply as a democratic rather than an Arab state. It defines Islam as the principle source of legislation but guarantees the rights of religious minorities.

The challenges facing the rebels are nonetheless daunting. The handling of the international court’s demands coupled with the need to ensure law and order, prevent tribal rivalries from escalating into open conflict and ensuring that Libya does not descend into lynch justice, chaos and anarchy will be initial indicators of what kind of beacon for the Middle East and North Africa Libya will be.

The rebels shoulder a special responsibility given that they are in charge of managing the transition, including for example the integration of elements of Mr. Qaddafi’s security forces with their rag-tag army into the country’s new force that will have to ensure security and law and order. That is likely to prove to be a painful and difficult process, but one that will determine Libya’s future.

With Islamists constituting an important segment of the rebel forces taking control of the country, Libya will also be closely watched as an example of the role of Islamists in countries in the region embarking on transition. Both Egypt and Libya are struggling with the role of the Muslim Brotherhood and An-Nahda in the societies they are seeking to build.

In the final analysis, the rebels have a model of how not to do it: Iraq in the wake of the US overthrow of Saddam Hussein. Iraq was neither a revolt nor a revolution but the US disbanding of Mr. Hussein’s security forces and military and its process of de-Baathification, the elimination of the remnants of the Iraqi dictator’s Baath Party, contributed to the sectarian and terrorist violence that racked Iraq for years. That is one mistake the rebels are determined not to make. That could prove easier said than done.

James M. Dorsey is a senior fellow at Nanyang Technological University’s S. Rajaratnam School of International Studies and the author of the blog, The Turbulent World of Middle East Soccer.