Lebanon at Stake: Turkey Must Reveal Its Cards 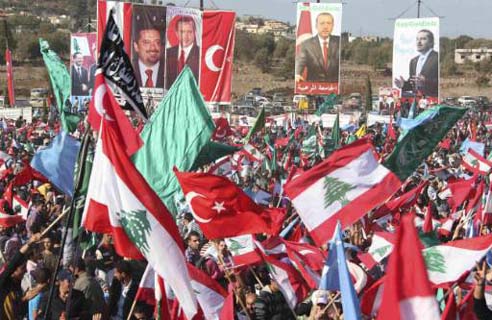 The timing of the Turkish Prime Minister’s two-day visit to Lebanon could not be more judicious. Lebanon’s enemies have been banging the drums of war louder than ever before. All the malevolent plans hatched following the assassination of Lebanon’s former Prime Minister, Rafik Hariri are about to converge for one formidable goal: to destabilize and weaken Lebanon, disarm Hezbollah and allow Israel to return, uncontested, and wreck havoc on the tiny country, the way it remorselessly did in 1982.

The Turkish premier Recep Tayyip Edrogan seemed clear in his intentions during his Lebanon trip. But considering what is at stake, maybe he wasn’t clear enough.

Israel is full of “uncertainties” and it is “not definite what it will do,” he claimed, according to Turkey’s state Anatolia news agency (AA). “Does (Israel) think it can enter Lebanon with the most modern aircraft and tanks to kill women and children, and destroy schools and hospitals, and then expect us to remain silent?” he asked. “We will not be silent and we will support justice by all means available to us.”

Erdogan’s words seem decisive, but they are as decisive as the strong messages he’s conveyed earlier, including in response to the Israeli war on Gaza (2008-09). Israel is yet to heed his any of his warnings.

Lebanon needs all its friends to prevent the possible civil strife that could follow any indictment by the Special Tribunal for Lebanon of Hezbollah members over the assassination of Hariri. The tribunal is a highly politicized venture, strongly backed by the US and Israel. It is seen by many in the region, including Hezbollah itself, as a roundabout attempt to subdue the Lebanese resistance to Israel. Israel’s all-out war against Lebanon in 2006 killed and wounded thousands, and destroyed much of the country’s infrastructure. However, it failed to dismantle the resistance, but instead provided it with a moral and political boost. Incessant attempts at destabilizing the country since then have yielded meager returns, and never managed to create the political vacuum needed to rationalize an Israeli comeback.

The verdict of the tribunal might be Israel’s last card in this terrible game. Thus far, it has been a winning card. Accusing Syria and Syria-affiliated Lebanese figures of being behind the Hariri’s assassination has reaped its rewards. 14,000 Syrian soldiers were rushed outside the country only two months after the former Prime Minister’s death. Syria was labeled a foreign occupier of Lebanon by the same Western governments that supported and defended the Israeli war on Lebanon a year later. Once Syria was more or less removed from the Lebanese equation, accusations of Syrian responsibilities were dropped, and an apology by a Western-affiliated Lebanese leader was issued. Mission accomplished.

Then, the tribunal, along with Israel and its allies, moved on to another target: Hezbollah. While no group is really above suspicion, Hezbollah is still indisputably correct in accusing the tribunal of being politically motivated, with an ultimate aim at disarming the resistance. In fact, Israel has been eagerly anticipating the moment when the tribunal issues arrest warrants for Hezbollah members, and carefully calculating its response. Gulf News reported that Israeli Prime Minister Benjamin Netanyahu consulted with top ministers in his cabinet on November 24 to “discuss concerns that Hezbollah could attempt a coup against the government.” An Israeli army statement issued on behalf of Chief of Staff Lt General Gabi Ashkenazi was also quoted by the Gulf News: “There is a real possibility that Hezbollah will take over Lebanon.”

It’s unclear what the Israel response will entail. In 1982, Israel acted against various resistance groups of Lebanon, demolishing the country in the process, and installing a ‘democratically-elected’ puppet government. This further contributed to Lebanon’s ongoing misery and the state of absolute chaos and civil war. In 2000, when a homegrown Lebanese resistance managed to force the Israeli army out from the south, Lebanon finally began to enjoy some prospects of stability and sovereignty. Then, on February 14, 2005, the Hariri convey was blasted by the equivalent of 1000 kg of TNT, killing the former Prime Minister and many others. The prospect of stability vanished, and once again Lebanon fell into the abyss of dark possibilities.

In the rush to seize the moment, Israel attacked Lebanon in the summer of 2006. This proved a gross miscalculation. Israel assumed that Lebanon was ripe for the picking, but obviously it wasn’t. The resistance was steadfast, and Israel’s military move proved costly, if not utterly embarrassing. Hezbollah emerged stronger than ever.

Empowered by Israel’s military failure, Syria began to reclaim its role in the region. Iran too was emboldened. In a series of events that culminated last October, the country’s President Mahmoud Ahmadinejad delivered a scathing speech in south Lebanon, stating that “the world should understand that the Zionists will go.”

Lebanon is relatively unified, since most parties are aware of the grim realities that await the country should Israel succeed in its plans. Even leaders within the Middle East are becoming somewhat sincere in their efforts to offset the potential crisis. But history has showed that both the Lebanese and Arab fronts are too fractious to withstand consistent and focused outside pressures.

Now Turkey has appeared in the picture. A new and solid card, it perhaps has the power to change the rules of this painfully predictable game. Israel, in response, is trying to undermine the risk. On November 26, Israeli daily Haaretz reported on Israel’s strategy to circumvent Turkey by warming up to and upgrading ties with various Balkan countries: Cyprus, Romania, Serbia, Montenegro, Macedonia and Croatia. It is just a matter of replacing financial and political losses in one place with gains in another, according to Israel’s straightforward calculations.

But Turkey can prove Israel’s estimate wrong. However, promises that Turkey will no longer stand idle as children and women are killed no longer suffice. Israel seems unmoved by words, perhaps betting on Turkey’s military and economic ties to the West. If Turkey is indeed serious, it must reveal some of its cards, and send a clear message to those fanning the flames: that 2010 is not 1982; that Lebanon will no longer be testing grounds for Israel’s and US lethal weapons; that the times have changed for real. Lebanon and the Middle East are counting on Turkey, not as a wild card, but as a true and lasting friend.