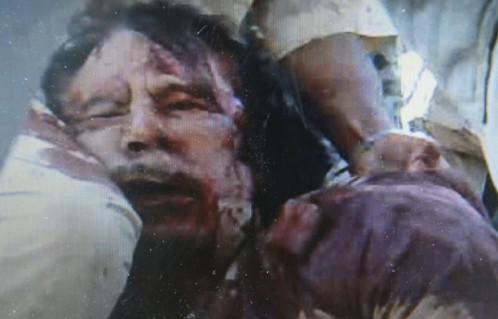 The final weeks of Muammar Qaddafi’s violent and coercive life reminded me vividly of Jim Jones and the People’s Temple Cult. It was obvious from late last August that Qaddafi had lost. The people in his own capital of Tripoli rose up against him in all but a few small neighborhoods, courageously defying his murderous elite forces.

Qaddafi had on more than one been occasion offered exile abroad, but sneaked off to his home town of Sirte to make a suicidal last stand. His glassy-eyed minions determinedly fired every last tank and artillery shell they had stockpiled right into the city that sheltered them in order to stall the advancing government troops. This monumentally stupid last stand turned Sirte into Beirut circa the 1980s, as gleaming edifices deteriorated into Swiss cheese and then ultimately blackened rubble. Qaddafi had favored Sirte with magnificent conference centers and wood-paneled conference rooms even as he starved some Eastern cities of funds, and in his death throes he took all his gifts back away from the city of his birth, making it drink the tainted Kool-Aid of his maniacal defiance of reality.

Among the attackers were citizen militias from Misrata, the city of 600,000 that Qaddafi had determinedly besieged, subjecting its civilian population to cluster bombs and tank and artillery shells, even bombing it from the air before the UNSC intervened. The Security Council strictly instructed him to cease attacking his own population simply because they had come out to peacefully protest his rule. Qaddafi’s siege turned a Tahrir-like popular uprising into a civil war, as inexperienced young civilians in the surrounded city took up arms to fight off the armored Khamis Brigades and save their parents and younger siblings from the awful ire of the dread enforcers of Qaddafi’s malevolent will.

His defiance of the UNSC order turned him into a recognized war criminal, for which he was indicted by the ICC. But of course the bomber of PanAm 103 over Lockerbie, Scotland, the butcher of Abu Salim prison, the aggressor against neighboring Chad, and the fomenter of wars, tyranny and strife in Sierra Leone and Liberia, had long been a war criminal when few would mouth the words in public.

It is hard to see how the UNSC desire that the civilian population be protected from him could have been implemented solely on a defensive basis. As long as he had an offensive capability he would clearly deploy it, piling up towers of innocent’s skulls. Once he besieged and murdered the non-combatants of Misrata and Zawiya so mercilessly, all bets were off. He began with 2,000 tanks, which he sent against the demonstrators. When he had almost no tanks left, he was done, reduced to secreting himself in a sewage drain.

In contrast to Qaddafi’s encirclement of Misrata for months and use of cluster bombs in areas where children lived, the Transitional National Council troops advancing in Sirte regularly pulled back to allow local residents to evacuate, attempting to convince them to join the new Libya. Qaddafi never did a similar favor to civilians in Misrata or Zawiya.

The last stand at Sirte was very like Jim Jones’s last stand in the jungles of Guyana. Jones was an American religious leader who gradually went mad, demanding more and more sacrifice and obedience from the members of his People’s Temple congregation, which then gradually became a cult. I define a cult as a group wherein the leader makes very high demands for obedience and self-sacrifice, and the values of which diverge from those of mainstream society. When the outside world seemed clearly to be pursuing the People’s Temple into Guyana, with a Congressmen showing up in Jonestown to rescue a handful of adherents who wanted to go home, Jones reacted with fury, first sending a militia to kill the congressman and the defectors, and then instructing his followers to drink poisoned Kool-Aid. Many were injected with cyanide laced with liquids or shot. Those who would not agree voluntarily to be “translated” to the next world together with their messianic leader would be subjected to the ultimate coercion.

Qaddafi’s stand at Sirte underlined the cultish character of his politics, with the Revolutionary Committees and Khamis Brigades resembling the enforcers in Jim Jones’s encampment. The tragic episode highlights the irrationality, fanaticism, violence and tyranny of his acolytes.

It would have been better had Qaddafi been left alive to stand trial. The exact circumstances of his death are murky, but it appears that some of his loyalists may have attempted to rescue him from government troops and he died in the firefight or was dispatched lest he be sprung from captivity and serve as a rallying point for the remaining handful of cultists.

Those who expect Libya now to fragment, or to turn into a North African Baghdad, are likely to be disappointed. It is improbable that Qaddafi’s cult will long survive him, at least on any significant scale. Libya has no sectarian divides of the Sunni-Shiite sort. Almost everyone is a Sunni Muslim. It does have an ethnic divide, as between Arabs and Berbers. But the Berbers are bilingual in Arabic, and are in no doubt as to their Libyan identity. The Berbers vigorously joined in the revolution and more or less saved it, and are very likely to be richly rewarded by the new state.

The east-west divide only became dire because Qaddafi increasingly showed favoritism toward the west. A more or less democratic government that spreads around the oil largesse more equitably could easily overcome this divide, which is contingent and not structural.

Libyan identity is not in doubt, and most Libyans are literate and have been through state schools. Most Libyans live in cities where tribal loyalties have attenuated.

There will be conflicts, and factionalism is a given. The government is a mess, with only a small bureaucracy and limited pools of persons with management skills. But oil states in the Gulf facing similar problems back in the 1960s and 1970s just imported Egyptian bureaucrats and managers, and Egypt and Tunisia have a surplus of educated potential managers who face under-employment of their skills at home. Oil states most often generate enough employment not only for their own populations but for a large expatriate work force as well. Just as the pessimists were surprised to find that post-Qaddafi Tripoli was relatively calm and quickly overcame initial problems of food, water and services, so they are likely to discover that the country as a whole muddles through.

The new government already is gaining significant resources from oil production. In September, the TNC was pumping 100,000 barrels a day. It is now doing 200,000 b/d, and analysts expect it to pump 500,000 b/d by January.

The final defeat of Qaddafi and Qaddafism is a victory for the Fourth Wave of democratization that began in Tunisia and continued in Egypt. There is now a contiguous bloc of 100,000,000 Arabs in North Africa who have thrown off dictatorship and aspire to parliamentary government (Tunisia’s elections are coming up on Sunday). Those who dismiss this movement because Muslim religious forces will benefit are exhibiting a double standard. Roman Catholicism benefited from Third Wave democracy movements like those in Poland and Brazil, as did Eastern Orthodoxy. Were democracy to break out in Burma, Theravada Buddhism would benefit. So what?

The Arab League, President Obama and NATO have been vindicated in their decision to forestall the massacre of eastern Libyan cities such as Benghazi. The region’s remaining bloodthirsty tyrants, who have not scrupled to massacre non-combatants for exercising their right of peaceable assembly and protest, should take the lesson that mass murder is a one-way ticket for them to the sewage drain of history. As I told the NYT today, ““The real lesson here is that there is a new wave of popular politics in the Arab world… People are not in the mood to put up with semi-genocidal dictators.”

I saw George Friedman of the Stratfor group on Erin Burnett’s CNN magazine show rather apocalyptically predicting a Baghdad on the Mediterranean in Libya. Those with investment capital who short Libya out of such overblown concerns will only be missing a big opportunity. The Transitional National Council needs our support now, and the new, liberated Libya will remember who befriended it in these uncertain times. The bulls are running in Tripolitania and Cyrenaica.

2 Responses to The Inevitably Brutal End of Qaddafi’s ‘Cult’