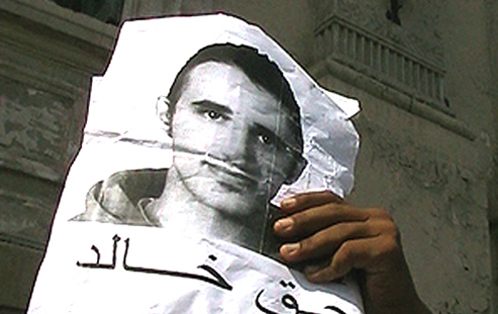 The recent verdict in the case of the brutal killing of 28-year-old Alexandrian Khaled Saeid, which was central to galvanizing the anti-regime sentiment that eventually toppled Mubarak, is both a blow to everything Egypt’s uprising stood for and a wake-up call, especially in light of the recent torture to death of Essam Atta Ali, the latest victim of police brutality.

The two plainclothes policemen who took turns to bash Saeid’s head against a marble surface and iron railings in the entrance of an apartment building in June 2010, were given seven years in a maximum security prison, the least penalty for manslaughter, in a closed session not open to the media.

Defendants Mahmoud Salah and Awad Ismail Suleiman were not even charged with murder. They were charged with “wrongful arrest and cruel treatment” despite the fact that the main argument for the defense, that Saeid’s death was the result of asphyxia on a drug wrap he swallowed, was overturned by the findings of an independent forensic committee that found that the wrap was forced into his throat after he died.

What is the message that this verdict is sending to the Egyptian people? And what implications does this outrageous verdict have on the case of the century against Mubarak, ex-interior minister Habib El-Adly and six of his aides on trial for ordering the killing of over 840 protesters in the early days of the January uprising?

If Saeid’s killers, whose case has been scrutinized in court for over a year, will end up serving the lightest possible sentence for their heinous crime, then what exactly have we achieved? Even if we concede that they were merely guilty of “cruel treatment,” then how is justice served by handing down the minimum sentence in this case, when the maximum sentence is over double the number of years and hence would have been a much stronger deterrent setting the threshold for the state’s lack of tolerance for such summarily unacceptable aggression by police notorious for their violence and corruption?

The case of Ali, who was sentenced to two years in a military court last February and held in Tora prison, has thus come as a shock, but not an unexpected one.

The brutal nature of how he was killed, reportedly by pushing hoses into his mouth and anus, which led to bleeding, according to a report by Al Ahram Online, followed by his disposal in critical condition at a public hospital, proves how deeply engrained in the mentality of security personnel is the perception that violence, even murder, will be met with impunity.

The indications are all too clear. Even though one is not raising suspicion over Egypt’s courts and judges, it’s become clear that Egypt is still working within a legal framework in dire need of a complete overhaul to rid it of loopholes tailored to serve and empower certain state institutions, not to serve justice; and that we are constrained by lack of political will on the highest levels to embrace fundamental change.

The Supreme Council of the Armed Forces’ attitude so far has been self-serving and anti-revolutionary, abusing Egyptians’ trust and faith in the army to further its own agenda to perpetuate military rule in Egypt, albeit in a new and improved guise.

Elections are a key component of democracy, but Egyptians know all too well that they do not a true democracy create without clear separation of powers and independent bodies with strong mandates to oversee the executive authority with no exceptions for the defense ministry exploiting the over-used pretext of national security.

Time is running out before the first anniversary of January 25. SCAF must make the right choice for Egypt otherwise Egyptian will once more take matters into their own hands.

This time, they won’t wait 30 years before finding their way to Tahrir Square.