Jordan Swings Open its Doors on a 5-Star Jail 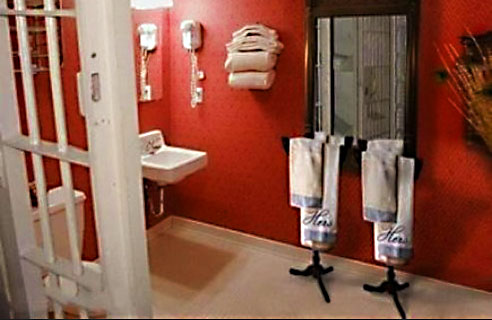 The town of Salhoub, north of the capital Amman, is now home to a ‘luxurious’ prison facility that overlooks one of the most famous pine forests now threatened with extinction. The prison, which houses 60 inmates, was built exclusively for officials, businessmen, and public figures sentenced to jail on criminal or ethical charges. The Salhoub prison made headlines when it received several famous figures that were found guilty by the State Security Court in the Jordan Petroleum Refinery corruption case. The newcomers included three former officials and a businessman; all were charged with bribery and abuse of power and public office.

The government decided to allocate the separate facility for public figures to protect them from possible life-threatening clashes with ordinary inmates in general prisons facilities.

…The prison is modeled after five-star hotels as far as decorations and facilities are concerned, but with accordance to the local and international security standards as Salhoub prison is surrounded with an electric fence and is heavily guarded. On the other hand, other facilities are over-crowded and suffer from deteriorating health services and limited or lack of entertainment activities. [source]

I admit, when I first read it, I honestly thought it was a joke. Upon further reflection, it doesn’t seem to be. Worse yet, it didn’t really surprise me. That may be the worst part about such stories: that they now cease to surprise us.

If the argument is concerning their safety, why all the luxury? Why not stick them in an ordinary jail and just quarantine them off from the other inmates who seek to harm them (who are part of the 99% of the population that would like to do just that)? Why build a luxurious facility?

Moreover, with these people responsible for committing some of the worst acts visited upon the Jordanian public, acts that include swindling and corruption that ranks in the millions – why are the same people they robbed, the ordinary tax-paying Jordanian, having to pay for their imprisonment in such luxury? Is that not the ultimate irony of the whole story?

Sigh, where are we heading? Do we not have enough divides between the rich and the poor that now even rich prisoners receive a higher standard of services than the poor ones?

UPDATE: As some may have already pointed out here and elsewhere, the photo provided by the source is indeed not of the prison itself (which isn’t great journalism on their part). Unfortunately, while the visual isn’t real, the story continues to be