Jordan: Where Wounds Get Deeper and Deeper 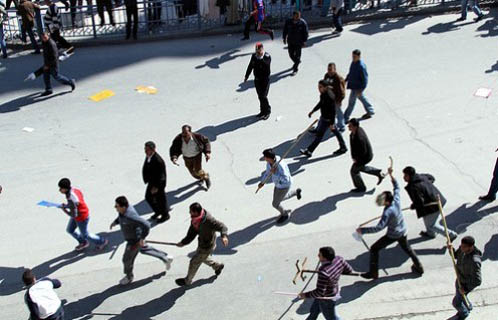 The events of last Friday have been refresher course disenchantment. To be honest, the event itself may have gone “unnoticed” had there not been so many journalists there to document the event, and had many of them not been beaten, which has caused much of the ruckus in the aftermath. Reading the papers in the last two days and the digital conversations abound, it seems the mistakes of the past continue to repeat themselves.

Now, more than ever, the road is split between two different peoples who continue to have no understanding of one another. Now, more than ever, the polarization is abundant, and the schism continues to grow. The problem with these schisms is that they rarely ever heal; they just stay there, lingering, until someone deals with it. Kind of like Black September – by not talking about it, it has remained there, hanging over our heads like a missing page of history, which it quite literal.

The amount of mistrust between these two emerging camps is simply amazing, and the natural question to ask is, where do we go from here?

It is interesting to note that with all this going on, the state is either completely ignoring this schism or capitalizing on its ability to create divisions and offer a little self-regulation amongst the masses. But it’s something that will continue to plague the country long after any reforms have or have not been accomplished. It will continue to fester, grow and eventually find new avenues in which to manifest and explode, and has been witnessed recently, some of the manifestations can be quite violent.

As for the press. It is quite interesting to me that a great deal of the last Friday protest has become about the protection of journalists. One camp has made an issue about the rights of journalists while the other is convinced that journalists are unprofessional and seek only to paint Jordan as another Syria. The former camp seems to have lost sight of what these protests are all about to begin with, and the latter (which includes the security forces) have simply little to no understanding about what the role of a free press is or should be.

The idea that because a news report or a photo or a video does not look favorably on the police is therefore evidence of a press that is bias and intent on making this country is as idiotic as it is incomprehensible. Those who demand “objectivity” are really calling for a bias that is in their favor. This is a very common mindset in Jordan unfortunately; we seem to constantly misdefine what objectivity means and demand standards of others that we do not apply ourselves.

My take on free expression is quite simplistic and perhaps even idealistic, but perhaps that’s what it should be. To me, as long as protesters are peaceful and unarmed they should not be attacked or persecuted by an armed security apparatus. If someone is causing trouble he or she should be arrested and moved away from the protest zone; no more no less. That person or persons should not be used as an excuse to attack everything that moves. Moreover, there is a need to hold our security forces to a higher standard. These people are trained and have a national duty to preserve and safeguard citizens. In other words, they’re supposed to be working for the people – not against them. Their role should not be political, which is something quite apparent during these protests when you talk to many of them and they go around calling people Islamists or Salafists or God knows what. This is obviously information being given to them by others, if not direct orders.

Then come the hidden agendas. Everyone is convinced that everyone else has a hidden agenda. It’s become a cliche and was even something poked fun of during the Egyptian revolution. But here it is again a testament to the level of mistrust that exists amongst different social groups. At this point, these so-called hidden agendas are becoming ridiculous and tend to pull out every single bogeyman in the book, from Palestinians looking to establish a state on Jordanian soil, to Salafists looking to establish the next Caliphate, to the Shia who are working with Iran, which is naturally a Hizballah/Hamas conspiracy, garnered with a dash of American and Zionist agendas. Somehow, those using these absurd arguments have gained possession of special x-ray glasses that allow them to instantly look at a protester and know immediately what their true intentions are and who is funding them. So no matter how many times any of these reform-minded protesters kiss the picture of the King (which they always bring along to the protest site) or wave a flag wildly in the air, they are viewed as liars.

Again, a testament of the mistrust that continues to rise and has made everything that much more murkier to understand. I mean who are you supposed to trust, the guy on the left waving a flag and kissing a photo of the King or the guy on the right, waving a flag and kissing a photo of the King. This naturally raises more questions such as, just how many times does one need to kiss the photo of the King or wave a flag in order to have their loyalty unquestioned? What does one need to do in order to gain some sense of trust from a segment of society that not only disagree with him, but seems him as a traitor? And that’s what’s interesting, it’s not that we disagree with each other on a political spectrum that is wider than Wadi Mujeb and yet can still accept one another. No. It’s that we disagree with one another and we consider one another to be irreconcilable enemies. So much so that I am prepared to physically hurt you for what you represent (in my mind).

Moving beyond last Friday is akin to moving beyond March 25th. There is no clear path and there is no one willing to take this issue on. Our leadership and our government is not playing any active role in healing this bleeding nation, and has resorted to public policy rhetoric as an exit strategy from this mess. But policy won’t do it. And neither will time. The national conversation that is not happening is allowing the void to be filled with thuggery, misconceptions, mistrust, anger, fear, frustration and violence. It is a void with no clear voice, no reconciliation, and no hope.

This is no longer about elected governments, constitutional monarchies, unemployment, poverty, electoral reform, corruption or nepotism. This isn’t about who is right and who is wrong. This isn’t about who has a hidden agenda or who has the ability to read minds and intentions. And this isn’t about policy or governance. All these issues are about to take a back seat because in my mind, this has now become about a society divided and struggling to keep it together. The security apparatus along with the executive branch is constantly going on about how protesters are hell bent on “destabilizing” the country with calls of reform, and their banners and their flags. The words “sedition” and “stability” are constantly being thrown around but in reality, this issue, this growing schism, is the greatest source of civil disorder there possibly is for Jordan. And if this issue goes unaddressed then my fear is that we will be swimming in the deep end pretty soon.

Where do we go from here?