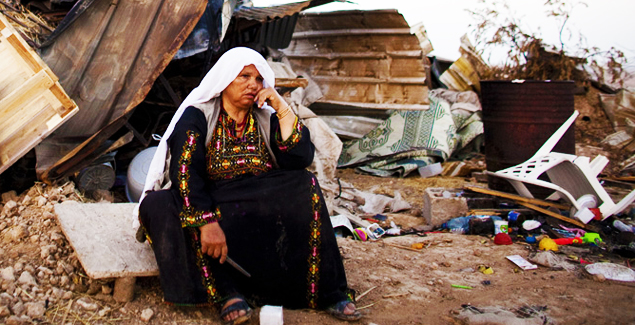 Not content with dispossessing nearly 1 million Israeli Palestinians during the Nakba through exile and theft of their land, Israel is repeating this Original Sin against the Negev Bedouin, who’ve lived in their homes for decades.

The State now intends to expel the Bedouin from these settlements, where they’ve lived for several generations, and to appropriate the land for itself.  In many cases, there are plans hatched with the Jewish National Fund and Israel Lands Authority to Judaize the Negev by creating new Jewish settlements to replace the Bedouin.

There are indigenous tribal members who are fighting back with every means at their disposal.  But the odds and long and the deck is stacked.  Every legal appeal has been repelled by a judiciary that many liberal Zionists like to claim stands as a bulwark against the worst excesses of rampant Israeli nationalism.  This particular issue shows the limits of such optimism.

Since its foundation, the State of Israel refuses to recognize Bedouin ownership over ancestral lands in the Negev.  Most of the Bedouins did not register their lands in 1921, as was required by one of the British laws; but neither did most other residents of Mandatory Palestine, including Jewish ones, carry out such registration. Sixty years later, the State of Israel made cynical use of this lack of registration to order to register most Bedouin lands as “State Lands”, thus making the Bedouins into “invaders” or “squatters” on their own ancestral land. 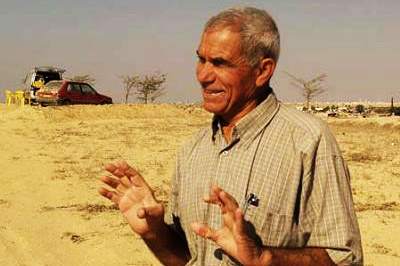 Nuri el Okbi, Negev indigenous activist, imprisoned for 'being Bedouin without a license'

Some of the Bedouins have tried to challenge the system of dispossession. Notable among them is Nuri el-Okbi, long-time dedicated human rights activist. In recent years, Nuri and his brothers are conducting a series of law suits against the state, demanding restoration of the lands taken from them in the fifties.

A few weeks ago, a ruling rejecting the claims of the el-Okbis was made in an important case – one in which for the first time a professional support team was involved, including attorney Michael Sfard, geographer Oren Yiftachel and other experts. The proceeding lasted three years, during which dozens of witnesses testified and hundreds of documents and expert reports [were] submitted, attesting to the el-Okbis’ ownership of the land.

The judge, however, chose to render a harsh, confrontational ruling, sticking to earlier precedents and concluding that any land which had not been registered in 1921 is ipso facto the property of the state. The court relied mainly on legal precedents, hardly referring to the evidence presented. Therefore, it is very important to lodge an appeal to the Supreme Court – the only body which is empowered to overturn precedents and strike out in a new direction.

At such a hearing, the judges would not be able to ignore the rich materials submitted by the el-Okbi Tribe, and the new legal arguments presented. In addition, such an appeal would strengthen the struggle of tens of thousands of Bedouins, who at this very moment are struggling against government plans to evict them to existing townships.

The government’s plan is based on the wrong assumption that Bedouins have no land ownership rights, and a Supreme Court appeal is now the only way to stop these draconian plans. Therefore, it is highly important to lodge an appeal on the el-Okbi Land Case, and make it clear that the Bedouin community is determined to struggle for their basic human rights – specifically to change a legal ruling which causes severe and completely undeserved damage to a large section of Israel’s citizen body.

After a legal struggle lasting three years, the Be’er Sheba District Court rejected the appeal ofNuri al-Okbi, veteran activist for the rights of the Negev Bedouins. El-Okbi’s plea for recognition of ownership over the Al-Araqib lands, from which he and his family were evicted in 1951, was rejected out of hand by Judge Sarah Dovrat. The ruling has wide implications for Negev Bedouins in general, implying an overall denial of their rights over ancestral lands.

Here is further information on the legal case and how to make a donation:

Nuri el-Okbi decided to appeal to the Supreme Court in Jerusalem, asking it to overturn this unfair ruling. In order to be eligible to lodge such an appeal, however, el-Okbi must pay no later than May 10 the punitive “court expenses” which had been imposed on him by the Be’er Sheba Court, as well as rendering various other legal fees – altogether amounting to the sum of 70,000 Shekels (about 20,000 US Dollars). This amount Nuri and his family – who have already spent considerable funds on ongoing legal procedures ever since 1973 – are unable to pay from their own resources.

We therefore call upon you to provide an urgent donation and give Nuri el-Okbi a chance to try redressing a blatant miscarriage of justice.

Checks should be sent to:

And made payable to Yoav Haas or Ya’akov Manor (both are veteran activists for human and civil rights in general, and for the Negev Bedouins in particular).

I urge all readers to dig into your pockets to offer whatever financial support you can for this righteous appeal.

For the literalists out there who may not understand my tongue in cheek photo caption, el-Okbi operates a garage near Lod.  The municipality has periodically given his business an operating license, but lately it has refused.  After initially accepting a compromise sentence that would’ve involved community service, the judge imposed a seven-month jail sentence on him.  In his remarks, he said that the victim’s political activism on behalf of the Bedouin compelled him to include jail time in the sentence.  That’s why I’ve written in my caption that he’s been jailed for “being Bedouin without a license.”  This of course is a reference to the punitive nature of the Israeli State when it comes to its indigenous, non-Jewish citizens.

One Response to Israel’s Plan to Dispossess the Negev Bedouin