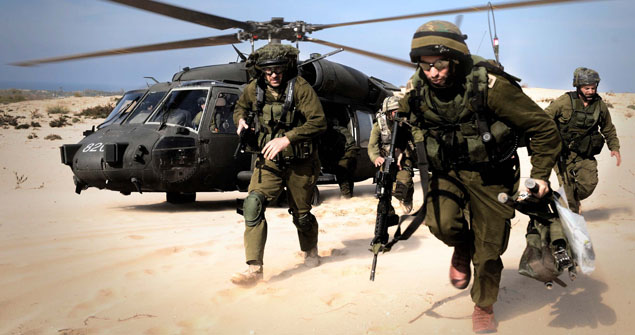 There’s a major dispute with the Treasury about how to calculate what the allocation should be, with a difference between the two ministries of $3-billion.  The meeting will determine who wins the argument.  For its part, the army will point to the Iranian threat and other developments related to the Arab Spring.

Some might describe this as a precursor to an attack on Iran, for which the military will surely need an augmented budget.  As for the threats posed by the Arab Spring, this means the thousands of “infiltrators” the IDF has to scare off or kill so that they can’t overwhelm the Jewish State when they mass along its borders seeking a Return to their former homes.  This, at least, is the image the scaremongers seek to portray for the average Israeli or cabinet minister.

The dispute involves this: Treasury is proposing  about $12-billion, while Defense is proposing $15-billion.  According to Haaretz, Netanyahu is expected to accept the position of the Defense Ministry, which will in turn diminish the amount available for funding initiatives demanded by the J14 social justice movement.  In other words, as always in Israel, national security trumps human needs.

The greed of the Defense Ministry is enormous.  They were given a special one time allocation in 2012 of $1.5-billion.  They wish to fold this into their regularly recurring annual budget in order to determine what next year’s budget should be.  The Treasury Ministry is fighting this money grab.

As part of its dog and pony show to the cabinet, the various military branches will paint a vivid picture of the Arab Bogeymen threatening Israel from all sides.  They’ll also serve up the tantalizing new cyber-warfare capability of Unit 8200 and its demands for ever more funding to sabotage Iran’s alleged nuclear threat.  At the end, the ministers will have to decide whether they want all those military bells and whistles or a scaled down version.  You and I both know in the choice between bright and shiny and shabby and worn, what these ministers will choose.  Can you imagine one standing up to a general and saying: “But general, you don’t need that weapon.”  Nah, never happen.

For their part, the Treasury officials at the meeting will warn ministers that every shekel they add to defense must be taken away from another ministry.  No minister likes to see his budget shrink.  It will be interesting to see how this goes.  But my bet is on defense to win.

Returning to the budgetary implications of war against Iran, a leading finance expert on the budget noted that the 2006 war on Lebanon cost over $4-billion and was much more limited in scope than a war against Iran would be.  If the economy shrunk by half over the course of a month that cost would be more than $10-billion.

A few other items to consider in the event of war:

“Economists called the decade after the Yom Kippur War ‘the lost decade.’ There was a decline in the standard of living. Enormous amounts were diverted into restoring the military establishment, at the expense of civilian budgets,” Ariav said, adding that a war would hurt Israel’s credit rating, tourism and foreign trade.

It should be mentioned also that the $12-15 billion figure mentioned above doesn’t cover any of the intelligence agencies (Mossad, Shin Bet) whose budgets are carefully guarded secrets.