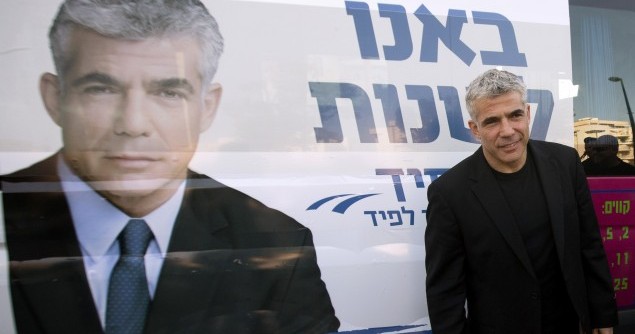 After the votes are counted, the drama will turn to forming the next ruling coalition. Just as a reminder, Netanyahu did not win the 2009 Israeli election, but was able to put together a coalition. As of now it’s unclear who will be asked to form the new government although Netanyahu seems confident having just posted on his Facebook page, “According to the exit polls, it is clear that the citizens of Israel want to me to continue to serve as prime minister, and to form as large as possible government.”

Regardless of today’s outcome, and whatever schadenfreude there is to be enjoyed from watching Netanyahu fall on his face, there will not be a meaningful change in Israel’s policy towards the Palestinians. The big winner today appears to be ex-news anchor Yair Lapid, and while he is commonly referred to as a centrist here is how he campaigned on the peace process:

Lapid said that he does not care what the Arabs want. “What I want is not a new Middle East, but to be rid of them and put a tall fence between us and them.” The important thing, he added, is “to maintain a Jewish majority in the Land of Israel.”

Lapid has said recently that the Left “makes the same mistake again when it negotiates the division of Jerusalem.”

Israel “must at last get rid of the Palestinians and put a fence between us,” he said, adding that “there will be no ‘new Middle East,’ but at least there won’t be three million Palestinians in Israeli territory.”

Lapid said that he had decided to present his foreign policy platform to voters at the Ariel University Center, located in the West Bank settlement Ariel, because “there is no map on which Ariel isn’t a part of the state of Israel.”

The Likud is in trouble. Leaked exit polls show Likud in jeopardy, Israel’s secular liberal bourgeoise flexing their muscle, and Israel’s Palestinian population voting. If the leaked numbers hold, the second best finisher will be Yair Lapid’s “Yesh Atid Party” (There is a Future Party). Yesh Atid values tolerance and work ethic ethic. Its disdain for the haredi population is open and palpable. It fears Israel’s economic and diplomatic isolation. Bibi has managed to awaken Israel’s Palestinian voters, just as he has manged to offend nearly everyone he meets other than Sheldon Adelson. And so, just as Israel’s collison course with DC, led to the Shamir led Likud government being turned out in 1992, Bibi’s clash with Barack Obama may cost him the Prime Minister’s Office.

On an IMEU briefing, Yousef Munayyer asks two guests if this government is “the last opportunity for the two state solution,” as some international leaders have suggested. Or, “What would it take for the clock to hit midnight, for the discussion of the two-state solution to be a past discussion not a present discussion?”

Yoram Meital, a professor at Ben Gurion University, says the election could be an impetus for Israel and the international community to adopt the Arab Peace Initiative of 2002, and with the guarantee that Hamas would be included in all discussions.

Would love to think Bibi’s poor showing in I’s election creates opening for renewed peace process, but it just ain’t so.