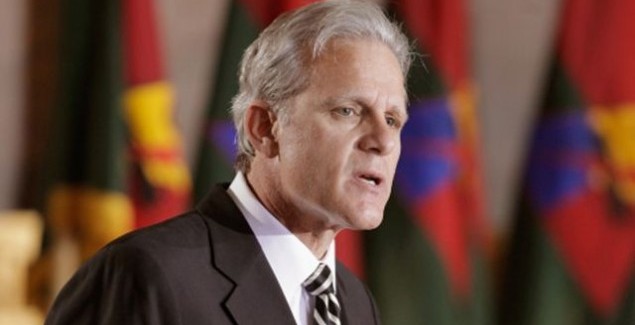 Michael Oren is ambassador of Israel to the U.S., which makes him the chief public relations employee of Israel. And he sees the writing on the wall. His piece in the Wall Street Journal is titled “What happened to Israel’s reputation?” You can see that he is enraged by Sarah Schulman’s pinkwashing piece in the New York Times, you can see that he knows that Israel exhibits “brutal conduct” in war and has demonstrated arrogance with the alleged peace process. He is afraid of BDS. And calls it a more “sinister” tactic than what? Than violence? Yes; he would prefer violence. We don’t know how to fight Gandhi, the Israelis say.

[Today as opposed to 40 years ago, mainstream US] readers would learn about Israel’s overwhelming military might, brutal conduct in warfare and eroding democratic values—plus the Palestinians’ plight and Israeli intransigence. The photographs would show not cool students and cutting-edge artists but soldiers at checkpoints and religious radicals…. Why has Israel’s image deteriorated? After all, Israel today is more democratic and—despite all the threats it faces—even more committed to peace.

Some claim that Israel today is a Middle Eastern power that threatens its neighbors, and that conservative immigrants and extremists have pushed Israel rightward.Given all this, why have anti-Israel libels once consigned to hate groups become media mainstays? How can we explain the assertion that an insidious “Israel Lobby” purchases votes in Congress, or that Israel oppresses Christians? Why is Israel’s record on gay rights dismissed as camouflage for discrimination against others?

The answer lies in the systematic delegitimization of the Jewish state. Having failed to destroy Israel by conventional arms and terrorism, Israel’s enemies alit on a subtler and more sinister tactic that hampers Israel’s ability to defend itself, even to justify its existence.

It began with PLO Chairman Yasser Arafat’s 1974 speech to the U.N., when he received a standing ovation for equating Zionism with racism—a view the U.N. General Assembly endorsed the following year. It gained credibility on college campuses through anti-Israel courses and “Israel Apartheid Weeks.” It burgeoned through the boycott of Israeli scholars, artists and athletes, and the embargo of Israeli products. It was perpetuated by journalists who published doctored photos and false Palestinian accounts of Israeli massacres.

Israel must confront the acute dangers of delegitimization as it did armies and bombers in the past.